Washington DC––known for the Library of Congress, the Capitol Building, the Supreme Court…and great cafes, too!

The closer you are to the nation’s capital, the more you’re gonna have to pony up for rent. Because of this, many people choose to live outside of Downtown DC.

Making your move to DC already? If you’re looking for professional advice, you’ve come to the right place. Try our moving cost calculator for free, or check out your options for the top interstate moving companies, best container companies, or most reliable rental trucks.

In this guide, we’ll give you the rundown of where is the best area to live in Washington DC. Not quite the National Mall, but there’s more to offer than what you might think.

We’ll also break down average rent prices, help estimate your commute to downtown, and give you an overview of each neighborhood’s unique vibe and nightlife.

If you want to jump to a specific neighborhood, feel free to use the table below. Otherwise, keep scrolling and we’ll get started.

The District of Columbia and Its Eight Wards 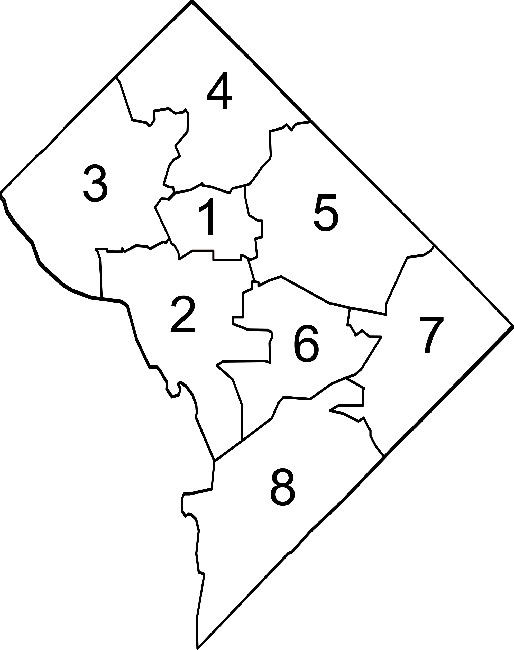 Perfectly positioned between Maryland and Virginia, DC is divided into eight distinct Wards, each with its own unique history, culture, and architecture.

Looking at each ward and the neighborhoods it encompasses is a good way to determine exactly where you want to be in the city.

For the purpose of this post, we don’t have time to go deep into the nuances that differentiate each ward. But here are some resources that give a more detailed idea of what you’re in for, hoping to find the best neighborhood for you.

But, where should I live if I work in DC?

A Commuter’s Guide to DC

The only advantage to living around Capitol Hill and Foggy Bottom is that it’s generally walkable. If you’re coming from one of the DC suburbs, you’ll need to know the best method.

There are plenty of resources to help you calculate your exact commute to work, but we thought it’d be a good idea to give you a brief overview of general commute times from each DC neighborhood to a centralized area of the city. 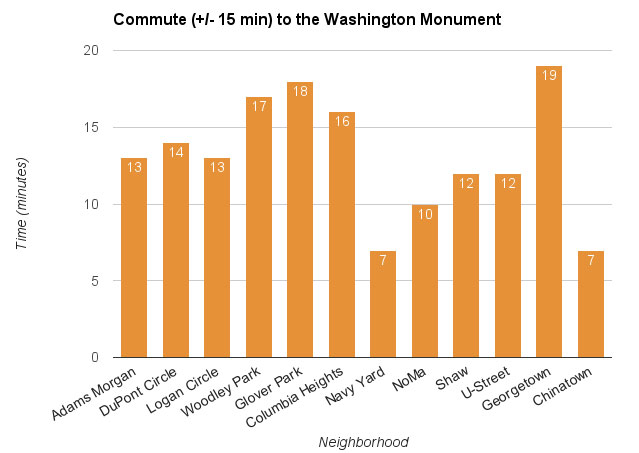 Now keep in mind, this is only a rough estimate. Here’s a good link you can use to calculate your specific commute once you know exactly where you’ll be coming from and going.

Another major factor in choosing where to live is, obviously, the price of rent.

George Washington said, “We must consult our means rather than our wishes.”

It’s good to keep in mind, while a neighborhood may be lined with trendy boutiques and bars, and conveniently located for your commute to work, those benefits may be drastically outweighed by insane rent prices.

Here’s a chart of the average rent prices for each neighborhood we’re covering compiled from Apartment List. 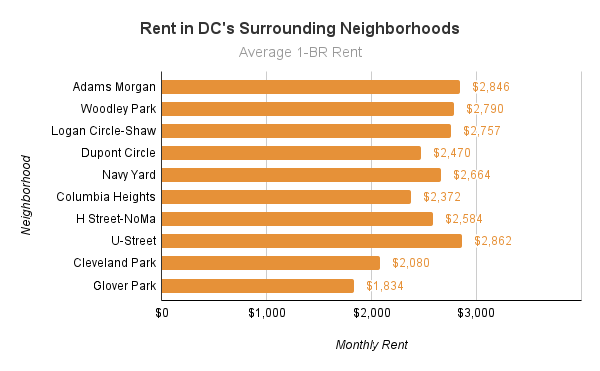 Now, these prices may look sort of scary (and they kinda are), but that doesn’t mean there aren’t plenty of reasonably priced rental options.

These are just averages meant to give you an idea of what’s out there, but our Moving to DC Guide has a ton of resources to help you find a wider array of properties around the Potomac River.

With an abundance of restaurants, accessibility to the active nightlife of 18th St, and a diverse population, Adams Morgan offers a unique charm that you can’t find many other places in the city. 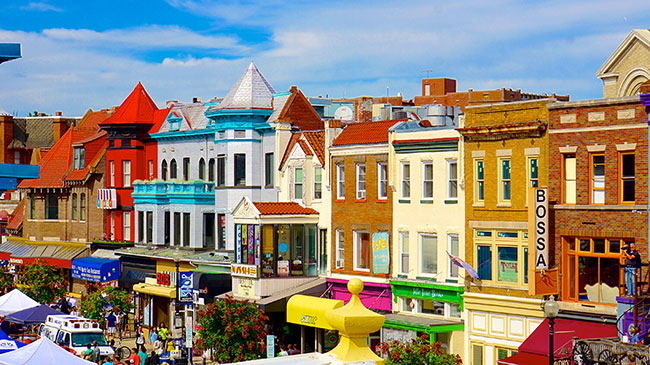 This area attracts all types ranging from college students and music lovers to young professionals who have a “work hard, play hard,” mentality. Nature lover? From nearby Chevy Chase and up to Bethesda, you’ll also find the great Rock Creek Park.

The one major downside? Buses are available, but there’s no public Metrorail stop. You have to trek to a separate neighborhood, Woodley Park (which isn’t that far away). 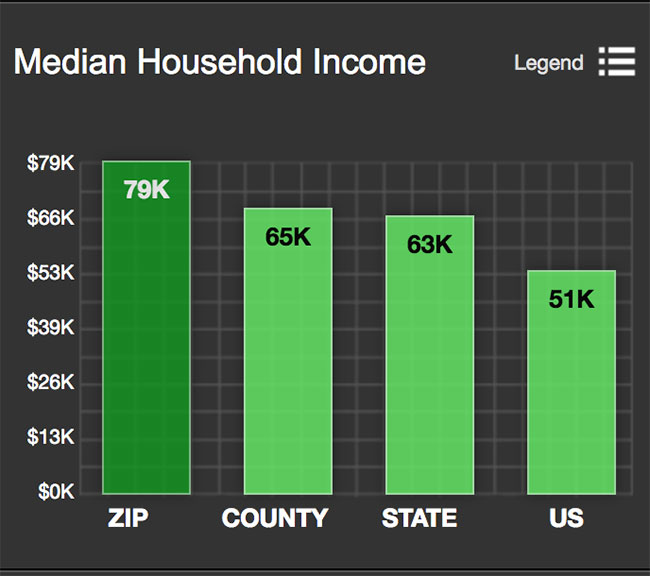 Because of its convenient location, the cost of living is pretty high. This cost vs. convenience tends to attract people with a slightly higher income than you’ll find in the rest of the city.

Just across the river from Arlington in Northern Virginia, Dupont and Logan Circle are the hubs of young professionals. The nightlife is slightly less happening than Adams Morgan, but the lunch, brunch, and happy hour scenes are real. There are also plenty of available metro stations, making commuting simple.

In addition, you might entertain living in either Circle if you’re attending The George Washington University, or you spend a decent amount of time around the West End, or between 14th Street to 18th Street. 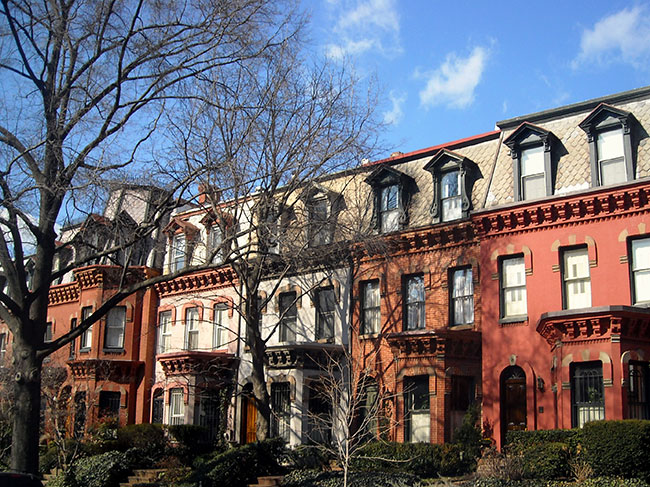 But, be warned! Therent average is higher than AdMo (which is very expensive), but it’s definitely a great spot to be if you can afford it. There might be options for affordable townhomes and condos if you can search for them!

DuPont and Logan Circles are two incredibly trendy areas in the Second Ward. 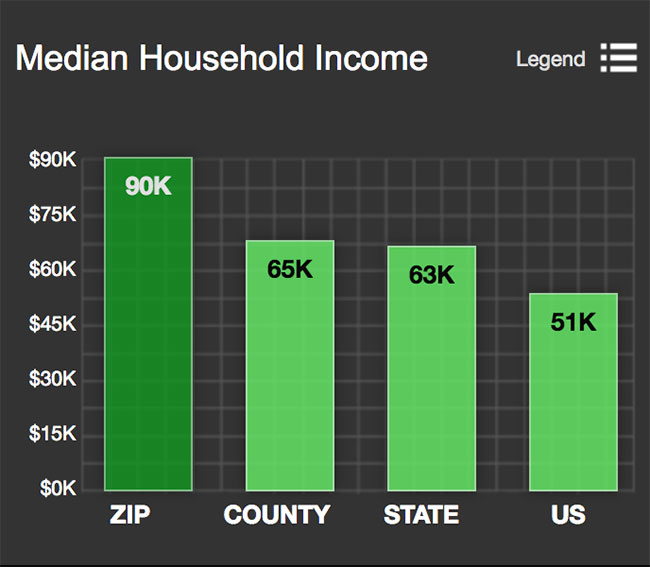 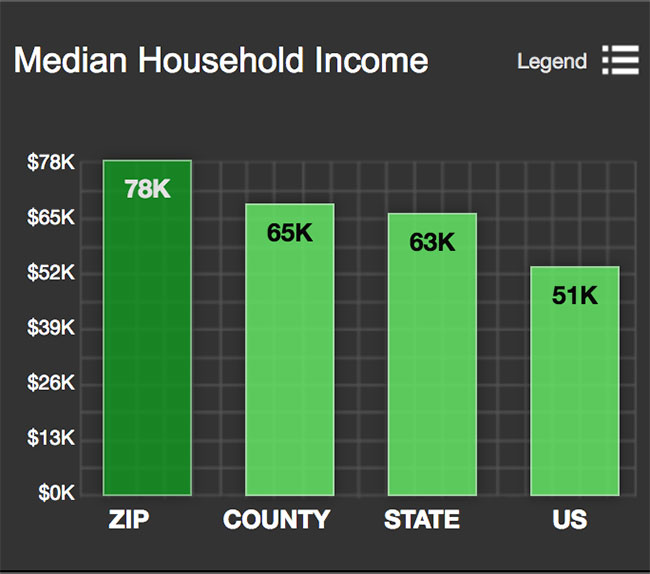 Unfortunately, the hipness factor will cost you a pretty penny. Of the two, DuPont Circle’s residents make substantially more than the average income, but Logan Circle residents are also slightly higher-paid than most.

These are solid “affordable” options if you are either: working on the Hill making dirt money, a grad school student, or a person who cannot afford over $1200 in rent every month. 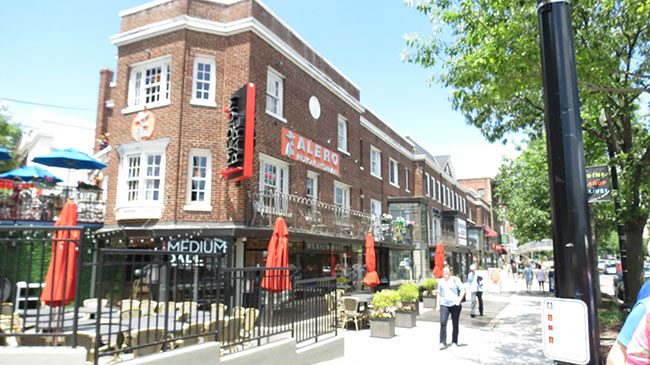 They are all Metro accessible, relatively safe areas (you need to keep a watchful eye out no matter where you live), and offer their own unique flair/nightlife scene. Check these spots out if you’re on a tight budget.

Columbia Heights is at the edge of the First Ward, while Woodley and Glover Park are both located in DC’s Third Ward. 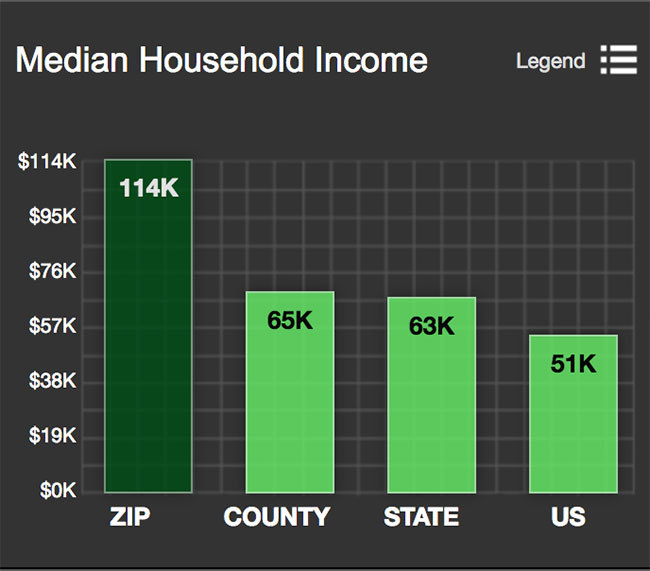 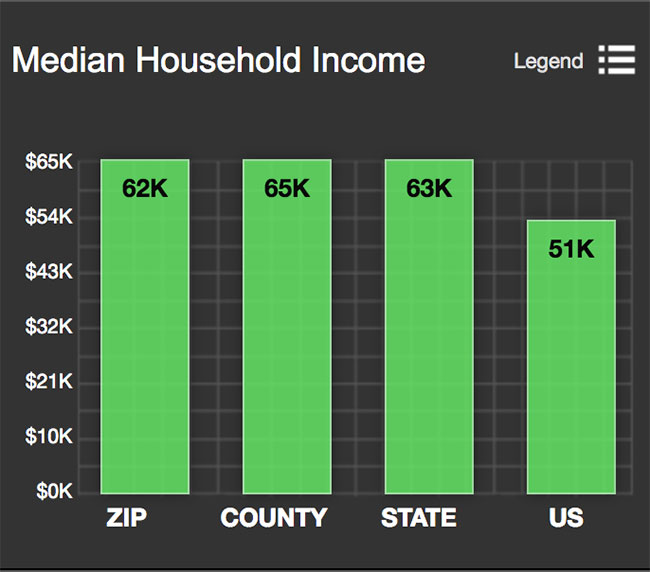 They’re a bit further out than places like Adams Morgan, but you’ll find more variation in rent price because of it, with Woodley and Glover Park attracting higher-paid residents and Columbia Heights residents earning closer to the city’s average.

Although in totally different quadrants, these are the “up and coming” neighborhoods in DC. New restaurants, renovated rowhomes, and a refreshing new vibe to what once were the “watch your back” type of neighborhoods. Especially Navy Yard, which sits along the Anacostia River near Southwest Waterfront. These days, the crime rates are lower, the public schools are getting better, and you might just have better access to green spaces. 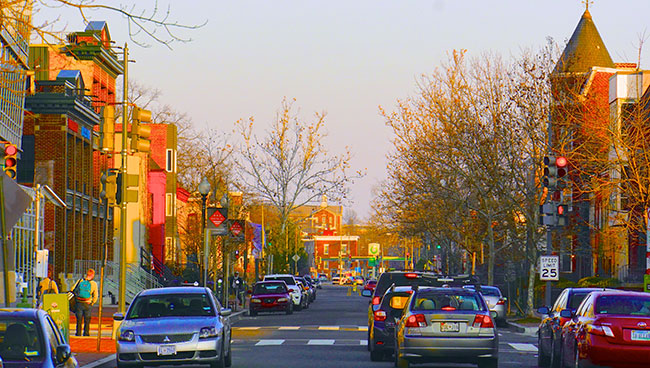 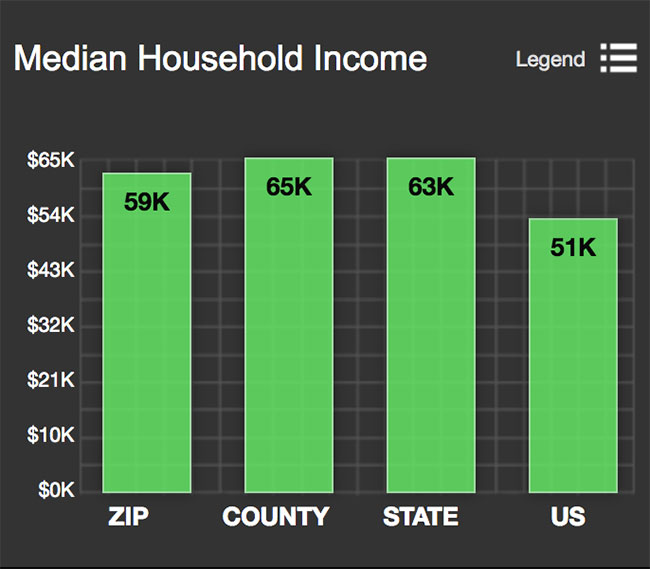 Shaw is uniquely positioned within the First, Second, and Third Wards. Navy Yard and NoMa both exist on the fringes of the Second Ward.

Since Navy Yard and NoMa are still somewhat under-the-radar areas, there isn’t a ton of demographical data available on them yet, but the average rent price is on the higher end of the spectrum attracts a crowd that makes slightly above the city’s median. However, Shaw’s median is lower than the rest of the city’s.

Ah, U-St, the hub of nightlife. Although gentrification has been on the rise for the past decade, there are parts that stay true to their core with a dense music and historical culture. Apartments are going up EVERYWHERE, and they’re not cheap either. 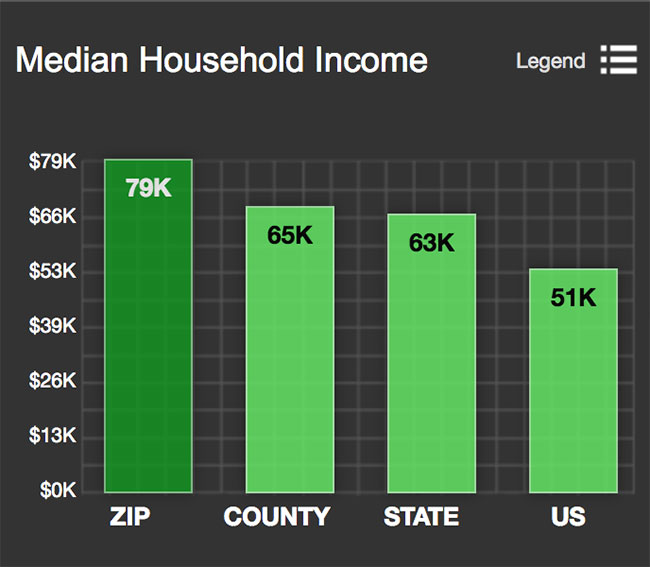 Now, between the centralized location and the proliferation of nightlife and gentrification tends to attract residents with pretty high household incomes. 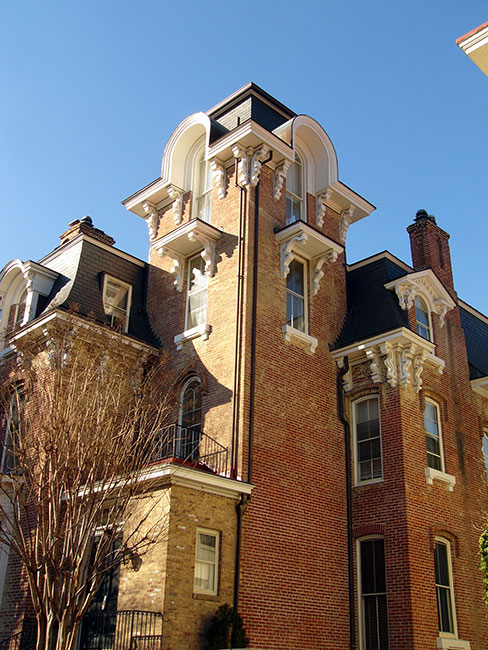 Georgetown’s charm is like no other. Cobblestone streets, picturesque waterfront scenery, and cookie-cutter row houses painted with pastels. The pristine nature of this Victorian-style neighborhood is due in part to the fact that they have successfully steered clear of implementing a Metro stop (making it rather hard to get to) and have a law banning all bar crawls.

Shopping is to Georgetown as bars are to U-Street. This neighborhood is always full of tourists, Georgetown University students, and residents carrying multiple shopping bags. M Street is a strip of high-end shops and restaurants. We’d recommend this neighborhood to (wealthy because rent is outrageous) people and young families who are seeking a quieter part of the city with a more suburban vibe.

Georgetown is conveniently located in the Second Ward. 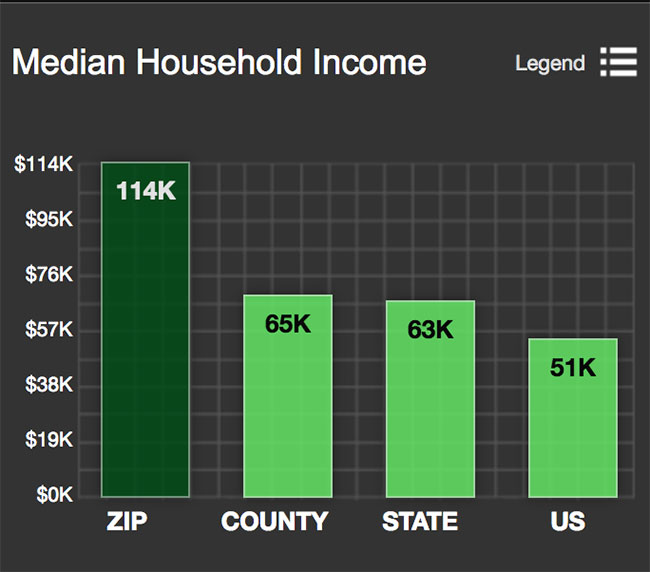 Its centralized location and idyllic scenery make Georgetown a great suburb to live in if you work in the city but don’t love the city lifestyle. This has also lead to some high real estate prices though, so the majority of Georgetown residents are probably making somewhere near a six-figure salary just to be able to afford to live there.

This neighborhood is awesome and brings in all types of people. If you’re from Boston, this isn’t the “Chinatown” you might be used to. 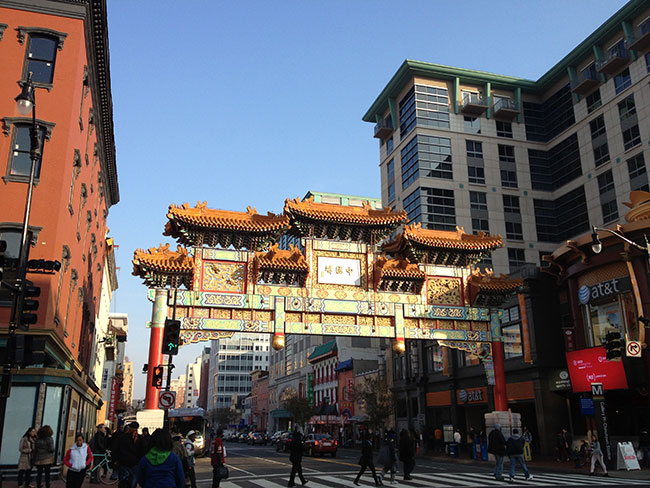 It’s much more commercialized, however, this neighborhood offers a hip vibe with a diverse set of eateries, museums, and both art galleries and street art. People migrate to the Chinatown extension of Penn Quarter for the vivacious charm it has to offer.

Chinatown encompasses the area between 5th and 8ths Street Northwest, directly to the east of Downtown in DC’s First Ward.

This is probably your best bet in terms of affordability and a centralized location. The median household income in Chinatown is the same as the county average.

And if you’re relocating within the greater DC area, head over to our Moving in Washington DC Cost guide for tips on how to get the best deals when moving.