Fight food insecurity by donating or volunteering in one of these cities in need. 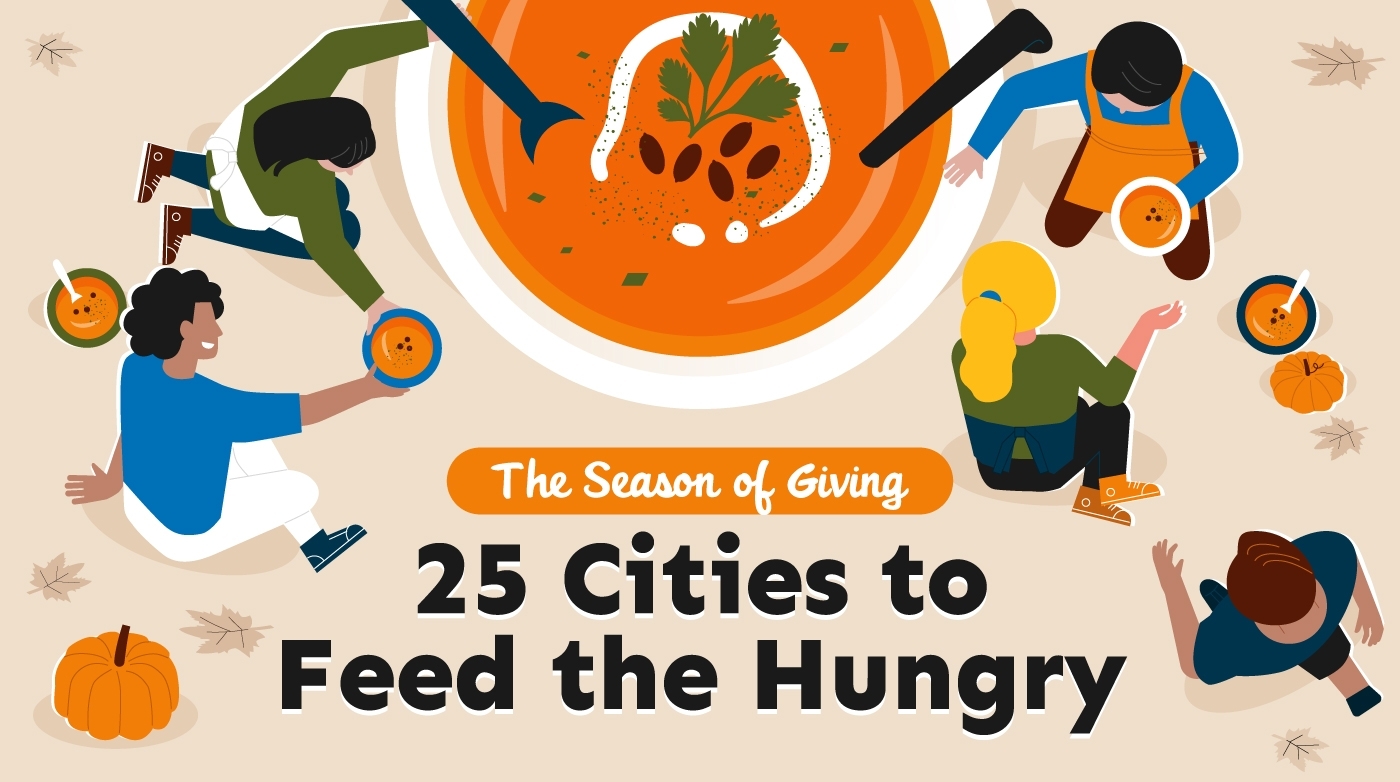 The holiday season in America is a time to give to those less fortunate than us and display a spirit of generosity. But while many celebrate the holidays with multiple celebratory feasts, as many as 42 million people across the country are living in food-insecure conditions.

This giving season, we wanted to find out which communities in America offer the most opportunities (and have the greatest need) for locals interested in giving back in the fight against hunger. For America’s 200 most populous cities, we analyzed a broad range of data related to food insecurity, homelessness, poverty, budget shortfalls, local pantry programs, and more, to find 25 communities where donations and volunteers can go a long way to helping put food on the table of families in need.

Findings at a glance

The State of Food Insecurity in America

Food insecurity is a phenomenon defined by a lack of reliable access to sufficient quantities of affordable, nutritious food. A major issue in the United States, Feeding America projects that 1 in 8 people and, worse still, 1 in 6 children will have experienced food insecurity during 2021.

Levels of food insecurity co-occur with factors such as housing insecurity, unemployment, and poverty, and research has found that food insecurity is associated with an array of negative health outcomes such as increased risk of birth defects, anemia, cognitive problems, aggression, anxiety, and more.

25 cities that need your help to fight food insecurity

Food insecurity is widespread across America, and just because there are fewer food-insecure families in one region does not mean those families are any less deserving of help than those living in another region.

While our analysis uses comparative metrics to demonstrate the magnitude of community-wide need, it is not meant as an appeal to donate or volunteer in any one region over another. Rather, we hope this analysis can serve as a call-to-action for anyone with means to look further into the issue of food insecurity within their own community and to get involved how and where they can.

Here are 25 cities in America with the greatest need and most opportunities to give back this holiday season:

Albuquerque, NM is the city with a comparatively high magnitude of need matched with many opportunities for involvement in the fight against food insecurity. In Albuquerque, nearly 15% of households receive SNAP benefits and 72% of students are eligible for free or reduced school lunches (compared to an average of 10% and 54% among America’s 200 largest cities). Even with this assistance, Feeding America reports that some 12.8% of Albuquerque residents are food-insecure, and that an additional $48.6 million dollars annually would be necessary to ensure each of these people get three balanced meals a day.

But with a high rate of soup kitchens and food pantries in Albuquerque, there are many opportunities for concerned citizens to get involved and give back. Here, there are 28 locations (within the SoupKitchen411 and FoodPantries.org networks) for every 100k residents, compared with a list-average of just 7 locations per 100k residents.

Falling short: how many meals are we short each year?

Among America’s 200 most populous cities, there is an average annual food budget shortfall of $24.4 million – the amount of money that all food-insecure residents within a city would need in order to bridge their meal gap for the year. Among the top 25 cities in our analysis, this figure was more than twice as high: $52.7 million is needed on average to bridge the meal gap.

Perhaps unsurprisingly, America’s two largest cities also have the largest food budget shortfalls. Los Angeles (ranked #86) and New York (ranked #19) have more residents, and thus more food-insecure residents, than other cities in America. Additionally, high costs of living make for an additional hurdle for families struggling to find the cash for a meal.

While New York may have the largest food budget shortfall among our top 25 ranked cities, it is Philadelphia where the highest number of meals are missed each year. The food-insecure population of Philadelphia misses a cumulative 38.8 million meals per year, or the equivalent of skipping dinner every other day. Among our top 25 cities, Philadelphia shows an especially high degree of need according to a number of factors: 27.6% of Philly households receive SNAP benefits (list-average: 10.5%) and 32% of children in Philly live in poverty (list-average: 8%).

For each city, we assigned a relative score of 0 to 10 for a range of factors related to food insecurity, assistance programs, and need. Scores closer to 0 indicate the city had a low need compared to other cities on the list, whereas scores closer to 10 indicate a greater need.

Raw data for these scores came from the following sources.

Homelessness by state, adj.* – Department of Housing and Urban Development

Shelter beds in excess/lacking by county, adj.* – Department of Housing and Urban Development

Rate of food pantries and soup kitchens within the following networks:

*Data based on county or state populations was adjusted according to city populations.