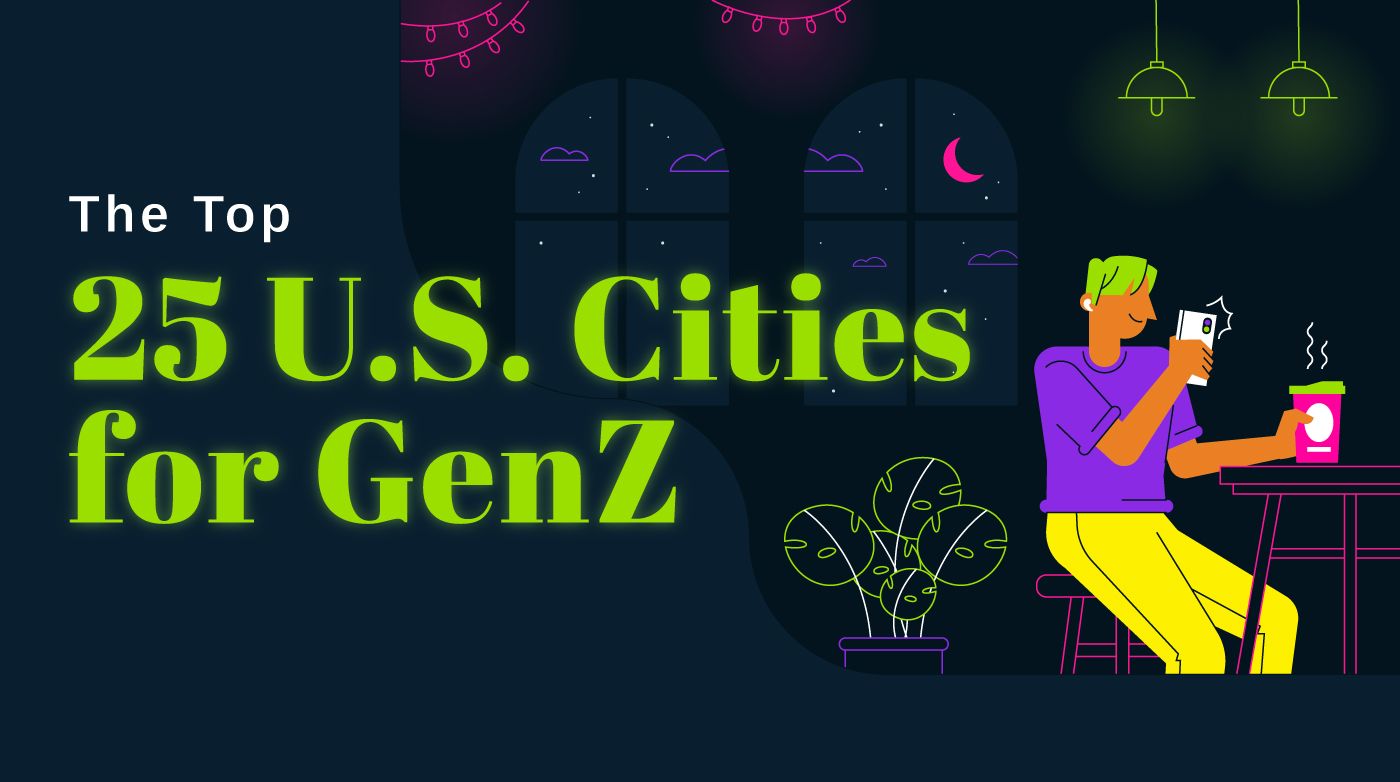 The impact of Millennials on everything from the office to department store chains, to breakfast foods is now a well-beaten horse.

Despite soaring rates of crippling anxiety and debt, Millennials packed up their pets and moved to cities like Denver and Austin, transforming these cities into major metropolitan areas; they advocated for more flexible working arrangements; they redefined restaurant dining, and they even turned out to be pretty good parents.

The impact of Gen Z on American society is not yet clear. Less than half of Gen Z are now legal adults, and of those that are, most are still college-aged. Amidst the social and economic tumult caused by the COVID-19 pandemic, it is hard to predict which cities will become magnets for the next generation of young adults, and how they will make their presence known when they get there.

Gen Z has more superlative titles than any generation before them. They are the most ethnically diverse, the most digitally plugged-in, the most likely to identify as LGBTQ, and are on track to be the most highly-educated generation yet.

As the oldest members of Gen Z begin to strike out on their own, they are posed to transform the social and economic fabric of the American cities in which they take root.

So, how can we know which U.S. cities may be most welcoming for Gen Z?

From rent costs to the dating scene, from the population of young people to the best employment opportunities, we analyzed social and economic data sets to predict which American cities will offer the ideal living conditions for the coming generation of young adults. For more details about the full methodology see our Methodology section below.

Class of COVID-19: In which cities will Gen Z grads find work?

The beginning of many Gen Z-ers careers coincides with a global recession and remote working revolution. One might argue that, when it comes to starting your career, location has never mattered less.

But despite their reputation as the generation that favors digital communication, Gen Z is hungry for in-person working arrangements. A March 2021 survey by Microsoft showed Gen Z employees among the most likely to report feeling isolated, stressed, and professionally stalled in the remote work environments necessitated by the COVID-19 pandemic.

Once the pandemic passes, which cities have the right job markets to attract Gen Zers looking for work?

After more than a year of working and attending classes from (often, their parents’) home, Gen Z may be the single most eager demographic to put on their business-casual-best and head to the office.

Unsurprisingly, larger metropolitan areas tend to have more in the way of jobs to offer than smaller cities. Just as job seekers from every generation have headed to these cities to pursue their career dreams, Gen Z will likely follow suit.

Which cities offer Gen Z an affordable cost of living?

A 2020 study by NerdWallet showed that, for significant portions of Gen Z, their parents are footing the bill for their housing, cell phones, health insurance, and groceries.

As the oldest members of Gen Z age out of the college demographic, financial independence will likely become a bigger priority.

In which American cities are newly independent Gen Zers most likely to be able to make ends meet?

Notorious for its impossible cost of living, San Francisco presents the highest financial hurdles among our list of the most Gen-Z-friendly cities. Here, rent costs are nearly 2.5 times higher than the national average. Furthermore, the regional price parity in San Francisco is only $.74 to the dollar.

Washington DC, Boston, Seattle, and Denver are other cities where high rent prices combine with above-average cost of living.

On the flipside, the average rent for a one-bedroom apartment in Cincinnati is nearly $100 less than the national average. What’s more, and a dollar spent in here goes an extra 10% further. Other Gen-Z-friendly cities with below-average housing and living costs include Fargo (ND), Sioux Falls (SD), St. Louis (MO), Lincoln (NE), Pittsburgh (PA), and Tucson (AZ).

We’ve pulled out the top 5 cities for each of the featured categories to more easily hone in on which top cities have the lowest average rent and the stronger value of $100.

Which cities are attracting higher concentrations of America’s young and highly educated?

Which cities have the greatest concentration of young people?

We’ve sorted this list according to our overall top 25 cities.

So, right at the top, you can see our overall highest ranking city, Madison, has more young people compared to the national average. What’s more, nearly half of Madison’s young population have a Bachelor’s degree. Young, educated people comprise a whopping 12% of Madisonians. Therefore, making the Wisconsin capital a veritable hotspot for academically-minded members of Gen Z.

From small, midwestern cities like Fargo, ND, to growing southern metropolises like Atlanta, GA, to quaint New England cities like Manchester, NH, and Portland, ME, freshly graduated members of Gen Z will find themselves in good company.

Methodology:  How we measured the best cities for Gen Z

Economic Factors: How we measured

Rent: To analyze rent costs, we used 2019 estimates from the Census Bureau.

Cost of Living: To assess the cost of living, we relied on 2020 regional price parities collected by the Bureau of Economic Analysis.

Employment Opportunity: In evaluating the Gen-Z-friendliness of a regional job market, we first looked at the most popular college majors of 2017 and 2018 as reported by the National Center for Educational Statistics. For each of the four of the most common fields of study during these years (Business, Healthcare, Social Sciences, and Psychology) we applied a weighted average to the location quotient of common occupational categories in this field.

The location quotient is a metric collected by the Bureau of Labor Statistics.  It expresses the concentration of jobs in a particular occupation in any given region, compared with the national average (1.0).

For instance, Erie, PA has a location quotient of 1.93 for healthcare support workers and 1.26 for healthcare practitioners. For clarification, this means the proportion of jobs in these fields are 93% and 26% higher than the national average. In order to determine how the job market in Erie, PA may look to members of Gen Z, we weighted these metrics along with those for Business, Healthcare, Social Sciences, and Psychology.

Social Factors: How we measured:

Youthful Population: To understand which cities have the highest concentration of young people, we analyzed 2019 population estimates from the U.S. Census Bureau. For each metropolitan statistical area, we compiled the proportion of people between of the ages of 18 and 34.

Educational Attainment: Additionally, we used the same source to analyze which metropolitan areas had the highest concentration of educated young people. Here, we looked at estimates for people aged 18 to 34 with Bachelor’s degrees or higher.

Dating Friendly: Finally, we used a 2021 ranking from WalletHub about the single-friendliness of American cities. Their study synthesized a number of factors ranging from online dating opportunities to the cost of a movie, to the median credit score of residents.

To see all data, formulas, and a complete list of sources, you can take a look at this Google Sheet.