If you’re looking for a low-key college town that doesn’t skimp on culture and amenities, want to be where young professionals are embracing an emerging tech scene, and like the idea of living in the birthplace of some highly influential musicians, you should consider moving to Chapel Hill. 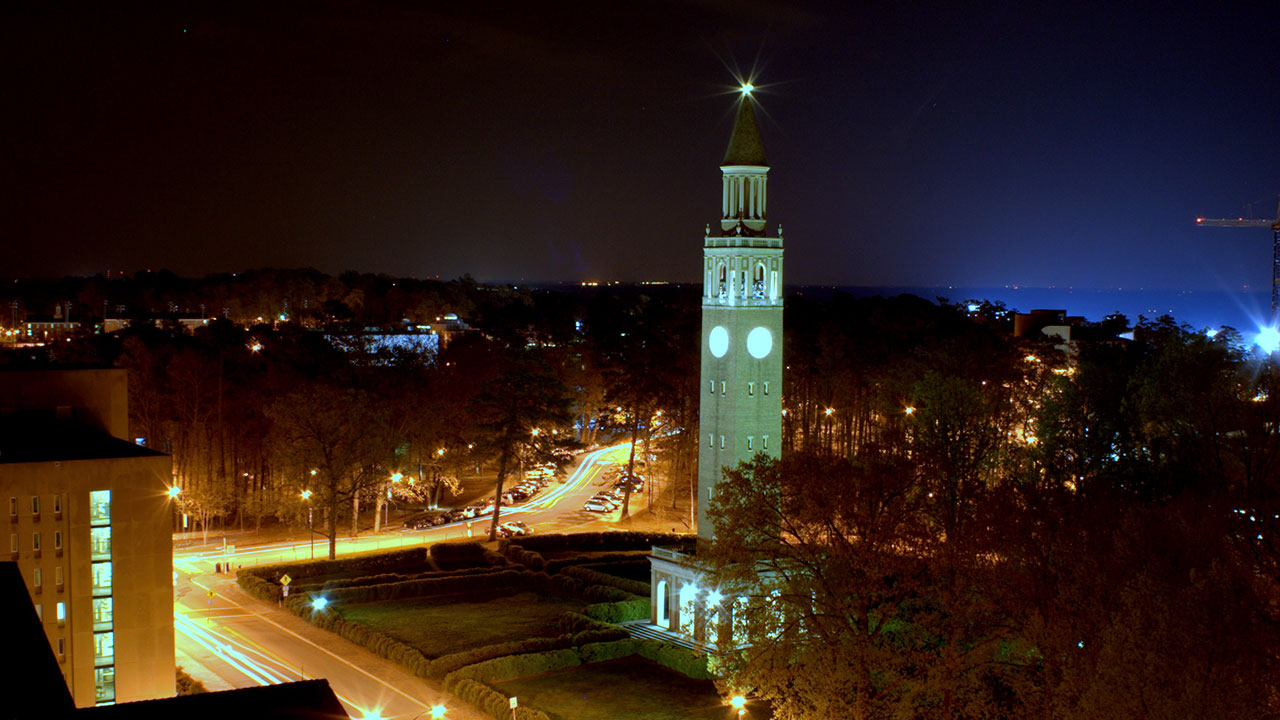 Much of Chapel Hill is dominated by the University of North Carolina, but don’t be fooled. The city and its surrounding areas have much more to offer beyond the typical college town bells and whistles.

Chapel Hill has one of the fastest-growing populations in the country, due in large part to the startup boom happening in nearby Durham.

Moving to a new city can seem overwhelming–but don’t freak out just yet. We’ve nabbed the study guide with all the answers for relocating to Chapel Hill so you won’t get schooled.

And if you’re looking for more info on moving to Chapel Hill, check out our Chapel Hill moving cost guide.

Now, before we get too deep into the details, check out this video of Chapel Hill natives explaining what makes their city so special.

When it comes to layout, Chapel Hill is in an interesting position. 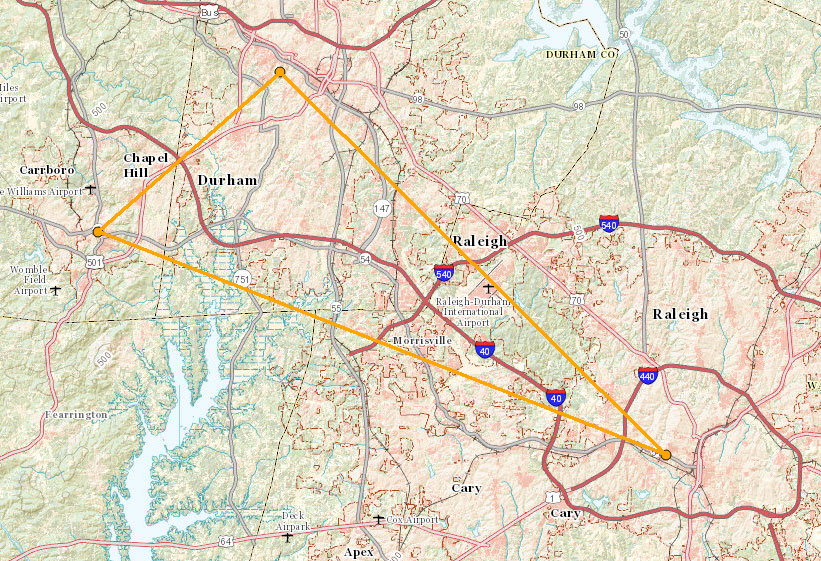 It’s considered its own city, but Chapel Hill is frequently viewed as a suburb of Durham. The city is also part of The Research Triangle of Raleigh-Durham, a region formed around the three major universities located in Raleigh, Durham, and Chapel Hill.

You’ll also frequently hear Carrboro, a town located directly to the west, lumped in with the greater Chapel Hill metro area, along with Cary, Apex, and Morrisville, all within the Raleigh area.

Basically, if you want to be in the vicinity of Chapel Hill there’s no shortage of big cities, small towns, and neighborhoods to suit a variety of needs and lifestyles. Let’s take a look at what they cost. 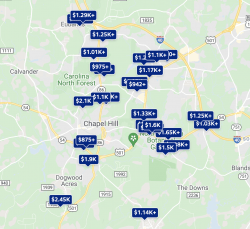 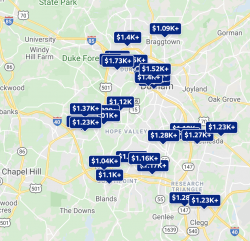 Judging by the Trulia Rent Maps, you can see that rental prices vary often in Chapel Hill and seem to even out when you get into Durham.

Here’s how the prices roughly break down

Alright, now that you’ve found a place you can afford, let’s see if you’ll like your neighbors.

Everyone wants to live in an area near people they can relate to and Esri’s Zip Tapestry tool is designed to help you determine exactly where those areas are. 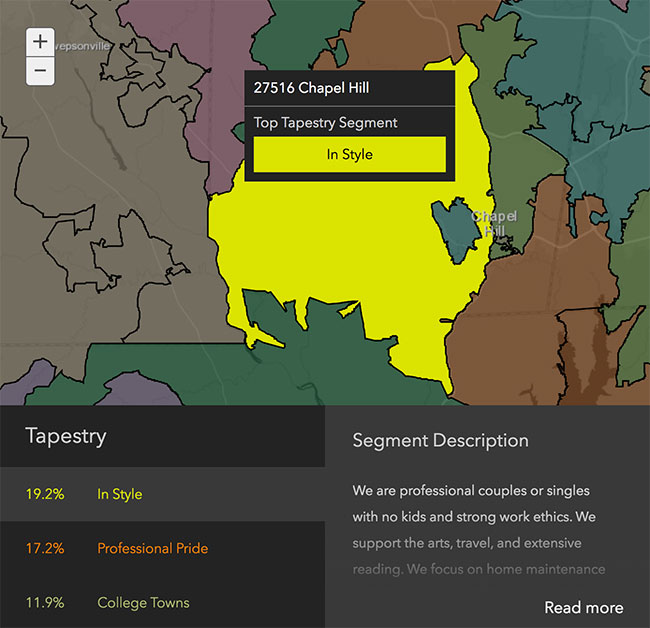 Let’s say you want to know more about Downtown Chapel Hill (27516). All you have to do is plug in the zip code and the tool will display the three largest demographic subsections in the area. It’s super cool, and it’ll help you to find some of the best places with a small-town feel.

Okay, let’s make sure your commute makes sense before you call a realtor.

It’s pretty common for people to commute to places like Raleigh and Durham which are both 30 – 40 minutes from Chapel Hill.

The availability of decent mass transit has definitely lessened traffic issues throughout the city as well, leading to less congestion during rush hours. 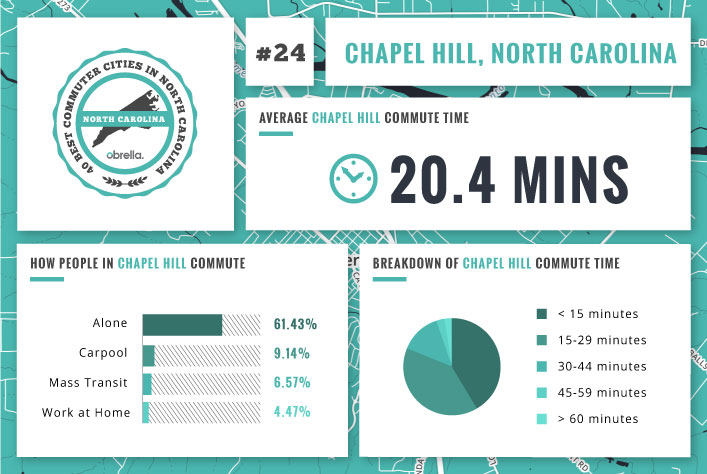 In fact, Obrella has ranked Chapel Hill as the 24th best city for commuters in North Carolina.

Still, if you aren’t a fan of driving, Chapel Hill has you pretty well covered.

Chapel Hill has good but limited public transit, a decent cycling infrastructure, and is relatively walkable for a city its size

It’s possible to get around Chapel Hill on foot, but with a walk score of 36, it’s not a completely walkable area.

You’ll be able to get around pockets of the city pretty easily on foot, but those don’t really extend past the centralized areas. 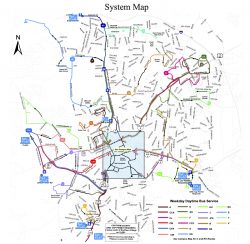 Even though Walkscore only gave it a transit score of 42, Chapel Hill’s bus system has a lot to offer.

The biggest advantage of taking public transit here is there are no bus fares, which is pretty phenomenal as it grants access to all residents and visitors.

Still, much like with walking around town, the bus system is limited to the downtown area, making the commute to surrounding neighborhoods difficult without a vehicle. If you want to get to the RTP, you’re gonna need a C-A-R.

The Chapel Hill area has a bike score of 50, which is a pretty fantastic improvement for the city. 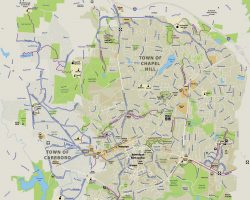 As you can see from the map, there are plenty of bike paths and trails around UNC, Carrboro, and greater Chapel Hill.

But no matter how you’re getting around town, you’ll probably want to know a bit about its crime rate.

No matter where you’re living, there’s bound to be at least some crime. The trick is knowing how to interpret all the statistics you see about an area’s crime rate. 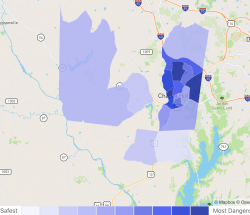 While that number might not seem great, it’s actually pretty on-par with crime rates of similar cities by population. For example, over in Greensboro with a population almost 5x that of Chapel Hill, their crime score is 6.

It should also be noted, while the overall crime score isn’t perfect, only 7% of the total crime in Chapel Hill is violent crime.

The largest portion of crime in Chapel Hill consists of property theft and damage which, while not great, isn’t dangerous.

But really, avoiding crime almost always boils down to staying aware of your surroundings, knowing where and when to avoid certain areas, and doing your best to avoid dangerous situations

And now that we’ve gotten the nuts and bolts out of the way, let’s jump right into the task of finding a place to live.

When looking for apartments, your first priority should be ammenities.

With Chapel Hill being in the Southeast, you can look forward to some pretty mild winters along with summers that can get pretty hot. 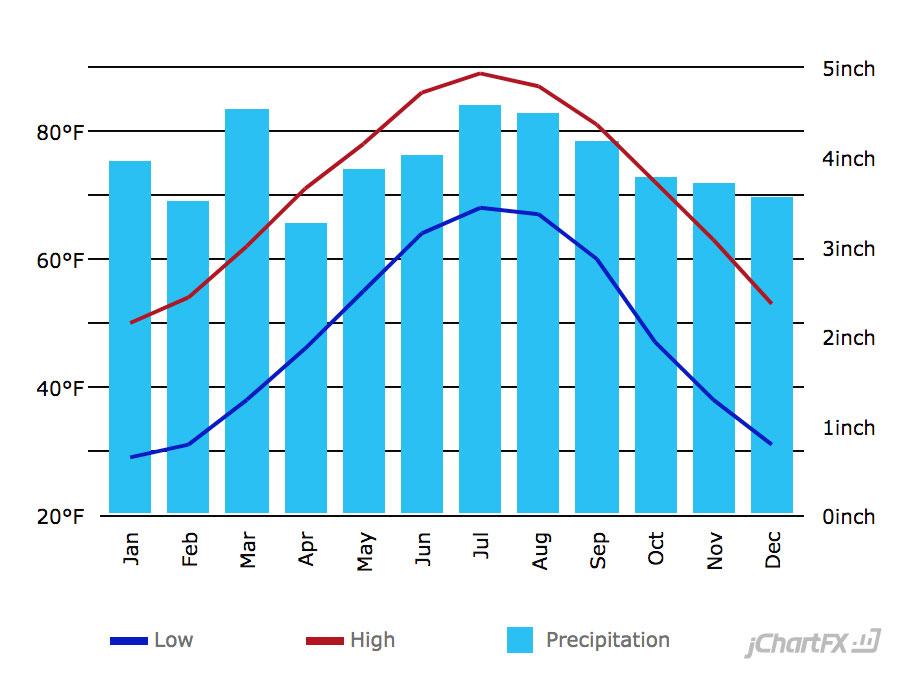 Due to the high temperatures in the summer and the chilly lows of winter nights, you’ll definitely want heating and air conditioning.

Also, unless you’re living Downtown or in a walkable region with easy access to laundromats, you’ll probably want a washer/dryer too.

Where to find apartments in Chapel Hill

As mentioned, Chapel Hill is surrounded by schools. This means a lot of rentals will get dumped onto the market around 2 months prior to a semester-ending when landlords receive notice.

Here’s a list of some of our favorite websites to find apartments.

Once you know what you’re looking for, use the search functions to narrow down places that match your specific budget, location, and amenity needs.

Even though it might seem a bit sketchy, Craigslist can be a pretty solid resource for finding reasonably priced places, too–as long as you know where to look, that is.

Over the past year, Chapel Hill’s average rent has increased by 4%, which isn’t too much worse than the national average,

Unfortunately, there isn’t a lot of updated information about vacancy rates in Chapel hill, but as of late the Chapel Hill-Durham area has had a vacancy rate of 6.6 percent in the first quarter of 2017.

Still, between a growing demand for student housing and steady gentrification, the rental situation in Chapel Hill is far from ideal.

With a rental market this competitive, you’re bound to run into some bad landlords. We’ve compiled a handy list of important rental laws so you don’t get scammed.

And if you’re in the market for a more permanent living situation, we’ve got you covered too.

Chapel Hill is a suburb itself and has plenty to offer people looking to buy a home. But if you’re looking to live outside of Chapel Hill proper, you’ll need to look at real estate in Durham’s other suburbs.

Since this is the most expensive area in the Research Triangle, you might want to look outside of Chapel Hill to find a better price. 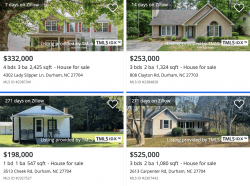 Located to the northeast of Durham, Gorman makes up for the distance from Chapel Hill with some very affordable homes and close proximity to Durham and is an ideal place for newly married couples who are buying their first homes. 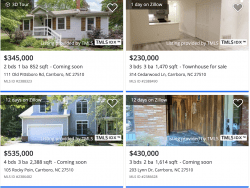 Carrboro is also a great real estate area to find a good quality of life. Benefits include excellent schools, diverse culture, and a slightly lower cost of living while avoiding all the students and difficult rental market of Chapel Hill.

Also, if you are coming from out of state, be sure to have a look at our out-of-state moving guide for more info and tips.

If you’re planning on moving somewhere within the city where you won’t have a designated parking spot, you’ll probably need a parking pass for your moving truck.

Fortunately, the Town of Chapel Hill on-street parking pass is pretty simple to apply for.

You’ve got the hard part over and done with and you officially live in Chapel Hill. Now, there are just a few things left to do and you’ll be a full-fledged resident. 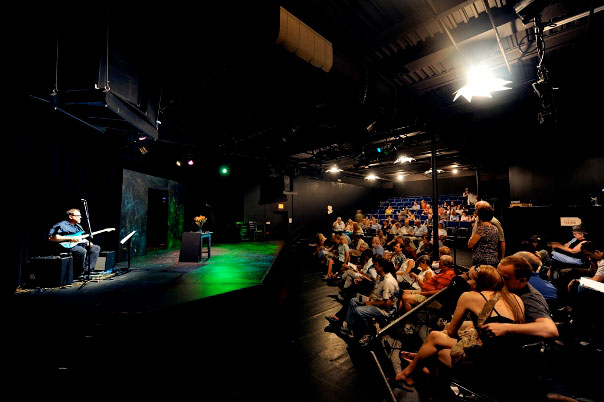 When trying to figure out what to do in a new city, a good first stop is the city’s own visitor’s guide.

Maybe if you’re someone who prefers more under-the-radar attractions, you’d like to check out this New York Times piece which digs into what makes Chapel Hill so unique. 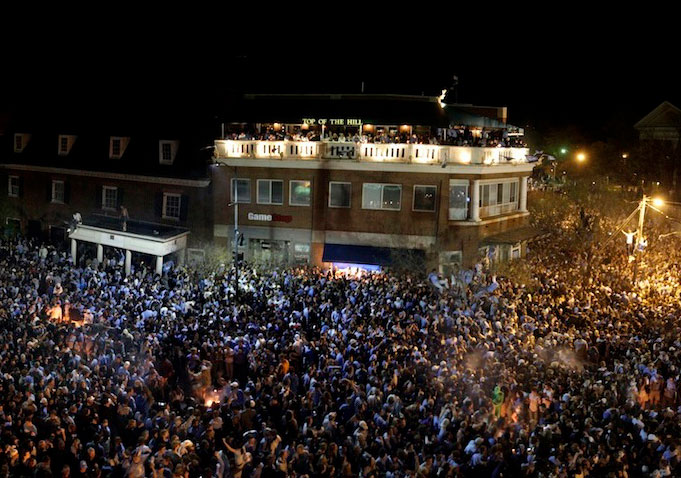 If you’re looking to unwind with a nice cold one after a long day, there’s no shortage of great places to drink in Chapel Hill. Though your tastes may differ, a few options to get you started include Top of the Hill Distillery, The Crunkleton, and Steel String Brewery.

For free and accessible entertainment, try the Ackland Art Museum. Or, if you enjoy the great outdoors, you can check out University Lake, The Orange County Sportsplex, or one of Chapel Hill’s many parks.

That’s all we’ve got on Chapel Hill. Let us know what we missed in the comments, thanks for stopping by. 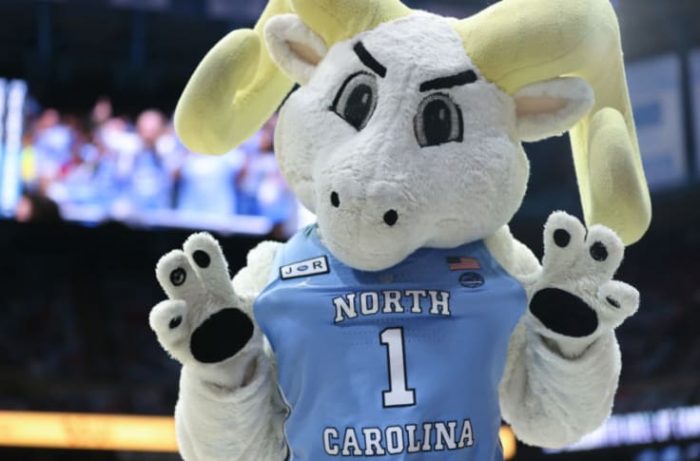