If you’re tired of San Francisco’s absurd rent prices, want a low-key city with easy access to the greater Bay Area, and don’t mind being near a plethora of festivals, you might want to think about moving to Concord. 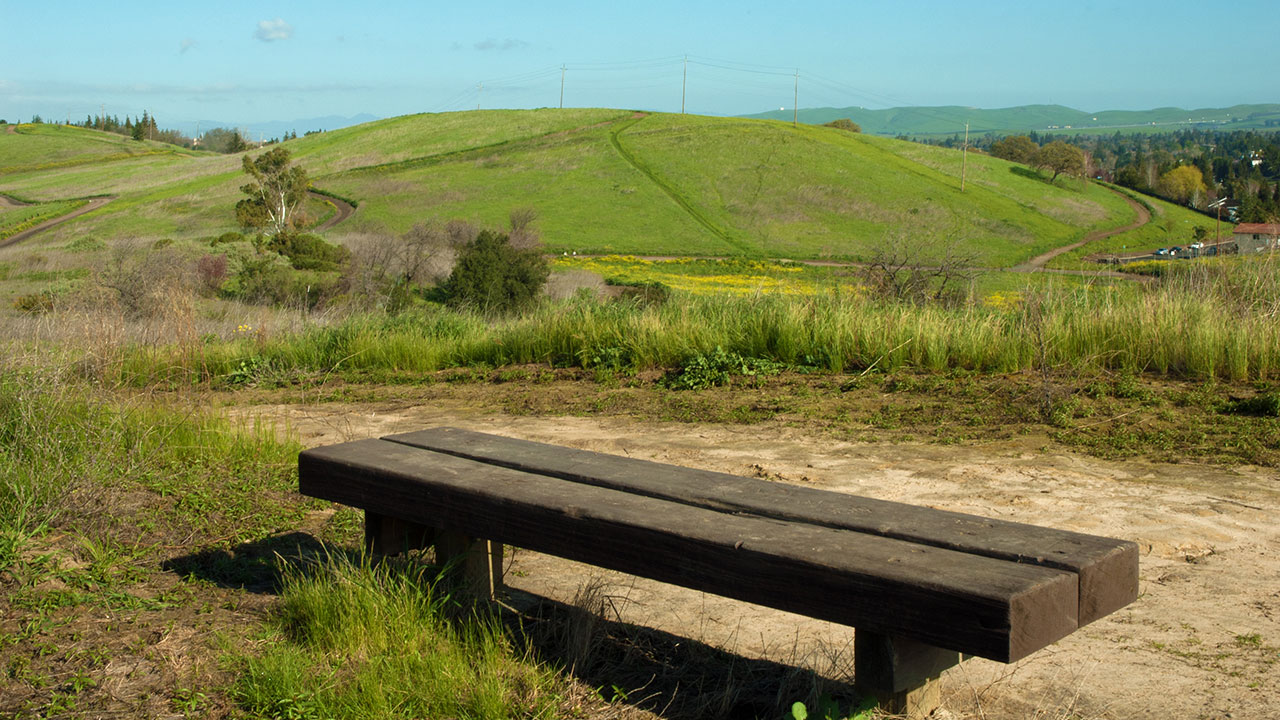 Concord is the 47th highest populated city in California and is quickly becoming popular amongst tech employees not willing to put up with the insanity that is San Francisco and Silicon Valley.

Apart from its utility as a commuter city, Concord has a lot to offer. For people who want a nice place to settle down without sacrificing the benefits of city life, you’re home. The trick is knowing where to look.

This guide will give you all you’ll need to discover what makes Concord such a great place to live.

And if you’re looking for more info on how to make your move to Concord, check out our Concord moving cost guide.

Now, before we get too deep into the details, check out this delightfully retro Concord promotional video from the ’90s.

Whether you’re looking to move to Concord because you want an easy commute to San Francisco or you just want a nice suburb to settle down in, there are quite a few quality neighborhoods to choose from. 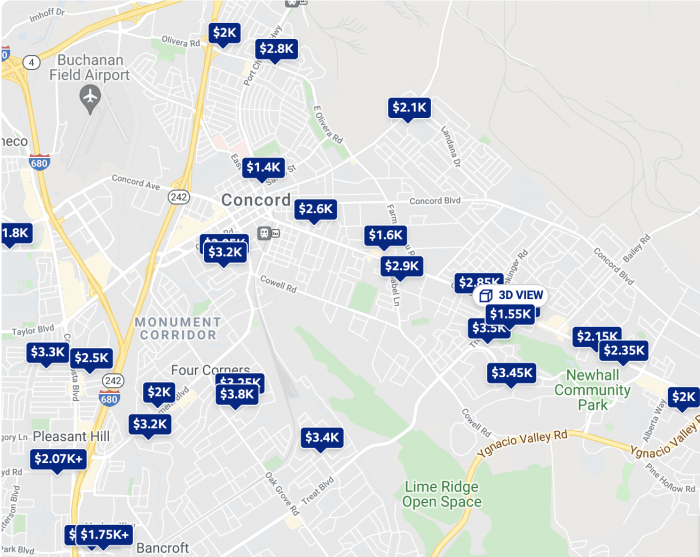 The rental map above shows rent in Concord has fairly consistent pricing throughout the city, with slight pockets of variation.

Here’s how the pricing for each area breaks down

Beyond being able to afford your place, you’ll also probably want to get along with your neighbors.

Everyone wants to live in a community where they feel like they belong. Fortunately, Esri has created a tool to help you figure out where you’ll best fit in. 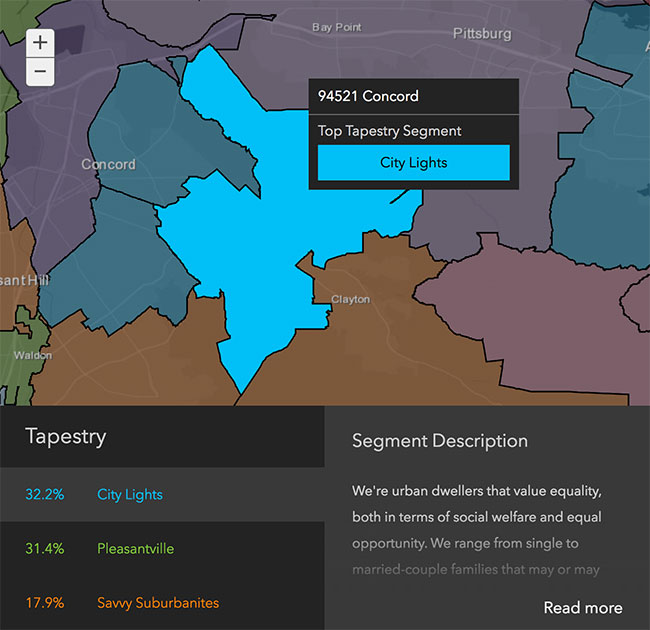 In short, if you were to plug in the zip code for Concord Pavillion (94521), you would get a detailed breakdown of the three largest demographic subsections in that area. Pretty neat, huh?

After figuring out what neighborhood you’d best fit in, you should start thinking about the logistics of getting to work.

While Concord has a few decent transit options, the most common way to navigate the city is by car.

But as you can see from the chart below, commute times vary wildly depending on where you’re going and when you leave.

The longer commute times above are most likely attributed to people commuting outside of the city.

But all this traffic seems to have an adverse effect on road congestion going in and out of the city, which the City of Concord is trying to correct.

If driving isn’t your thing, you still have plenty of other options for getting around Concord.

Concord is a fairly walkable city with a walk score of 46.

In other words, Concord is classic suburbia. You shouldn’t have a ton of trouble finding sidewalks and good walking routes in most areas.

But don’t expect walking to be a feasible means of transportation everywhere.

Get ready to use the BART

Overall, Concord’s public transportation is fine, but not great. 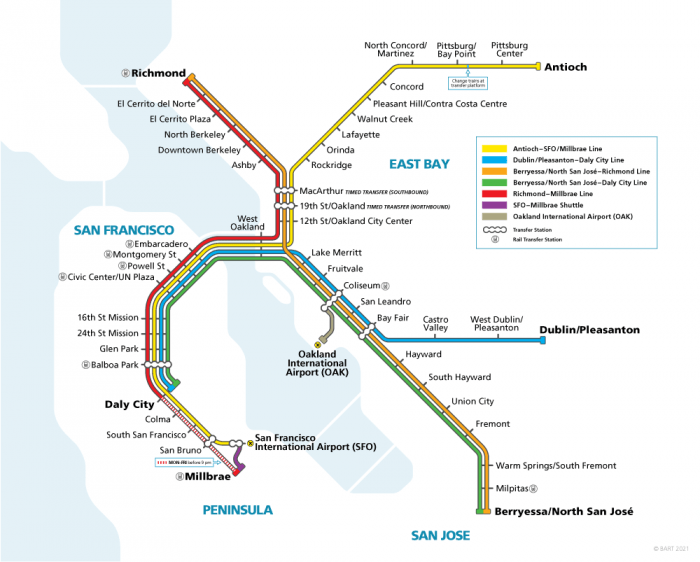 Its transit score of 30 reflects that the systems are in place, but don’t have a far reach outside of the more populated areas.

Now, when it comes to commuting within the city, you’ll be using County Connection which should get you around the more centralized parts of town pretty well.

If you’re looking to commute out of the city, the BART has you covered. In fact, many routes can get you to the major surrounding cities within 30 -45 minutes!

Concord is getting better for bikers

Concord’s bike score is right in the middle at 53, and recent plans are making the city more bike-friendly 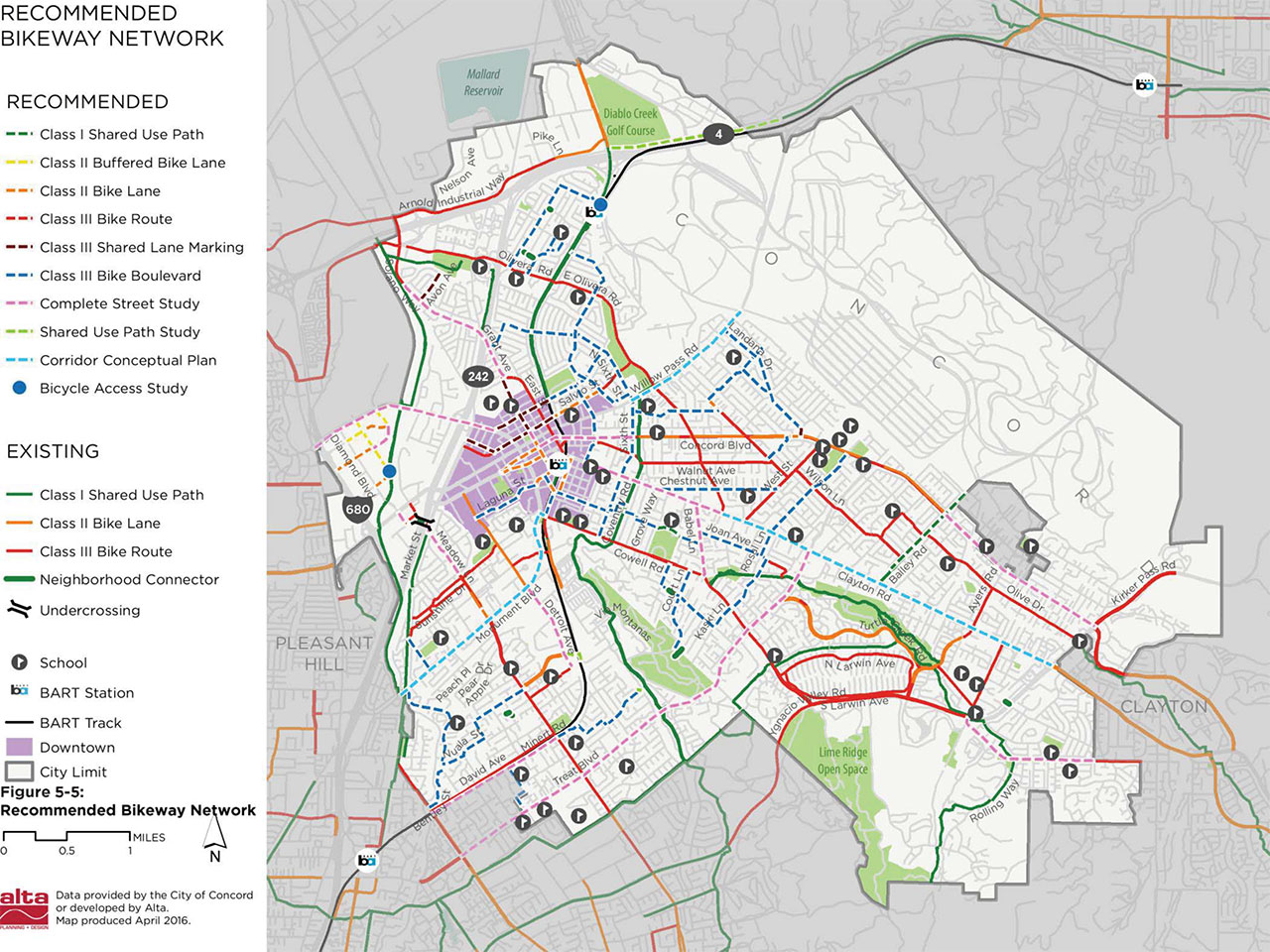 The main thrust of these improvements has been the Bicycle, Pedestrian, and Safe Routes to Transit Plan, which has been adding and improving the safety of sidewalks and bike lanes.

If you’re interested in keeping track of these improvements the Bike East Bay site is a great place to get updates.

And now that you know how you’re getting around, you should look into the area’s crime stats.

Regardless of where you live, crime is going to be a factor. The trick is understanding exactly what the crime rate means. 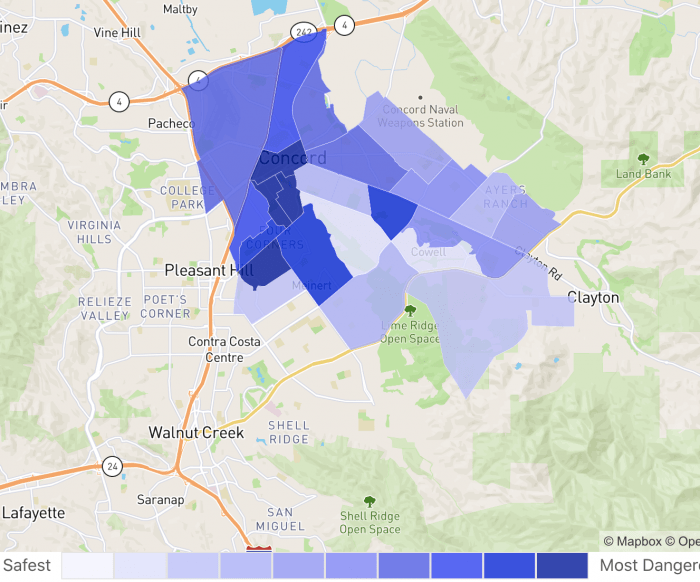 For example, NeighborhoodScorut has given Concord a crime score of 7 out of 100.

That seems pretty bad, but what exactly does it say?

We recommend hearing from the people who actually live there.

And if you dig into the stats, you’ll also see that most of Concord’s crime accounts for property damage, with only 9% being attributed to violent crime.

So, now that you know everything you’re getting into, let’s get down to finding a place to live.

The weather in the Bay Area is fairly mild, and with only 18 inches of rain a year, things are pretty easy. 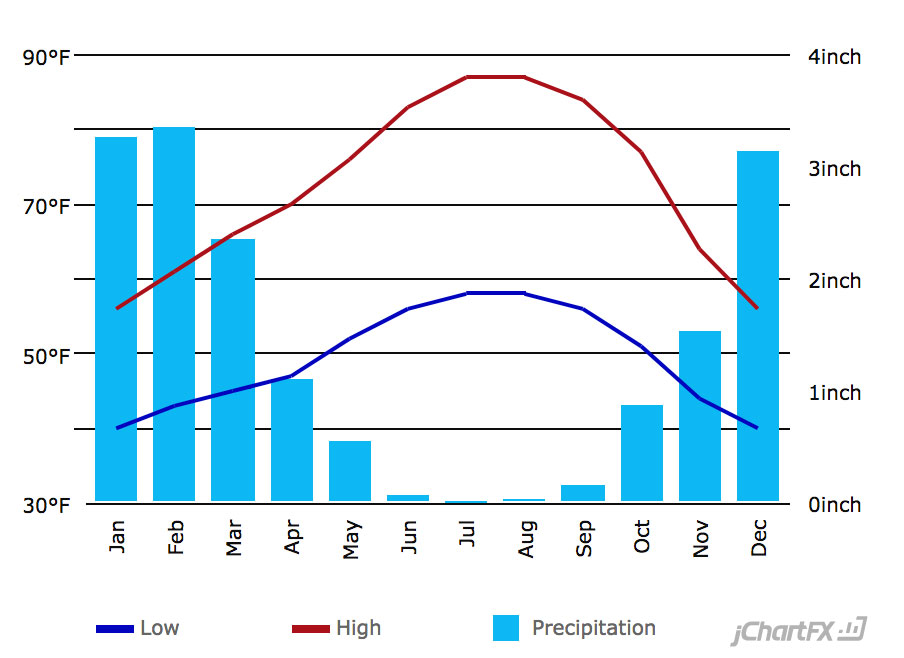 As you can see, summers here get kinda hot, but the winters aren’t too bad.

Because of this, you’ll probably need air conditioning, but heating isn’t a necessity.

You’ll also want to take into account your utility cost when you’re budgeting to rent an apartment.

Also, since most of the city isn’t super walkable, you’ll probably want an apartment that has a washer/dryer.

Finding a decent place to live can be rough.

To alleviate some of the stress, we’ve compiled a list of all the best resources for finding a place, each with filters that will help you find an apartment that fits your needs and budget.

And, though it’s a bit unconventional, don’t be afraid to check Craigslist for places on the cheaper end of the price spectrum that might not be listed elsewhere.

Concord’s average rent has increased by 4% within the last year, which isn’t too much worse than the national average.

And according to CivicDashboards, Concord’s vacancy rate is 6.6%, which is a slight improvement over the US’s overall vacancy rate of 6.32%.

Also, the city recognizes prices are becoming somewhat unreasonable and is considering rent-controlling some apartments.

No matter where you’re renting, it’s important to know your rights so you can avoid being scammed by a sleazy landlord.

But if you want something a bit more permanent, we’ve got you covered too.

If you’re looking to settle down in Concord long-term, there are plenty of great areas perfectly suited to homeownership––whether you’re a first-time buyer looking for a new home, or just looking for some prime real estate.

Concord’s Average Home Value is currently sitting around $604,951 which is 18.3% higher than it was a year ago.

Since prices are steadily increasing, you’d be best off to search for the best deal you can find.

Among Pleasant Hill and Martinez, there are plenty of places around the Concord area to settle down––these are just a couple of our favorites. 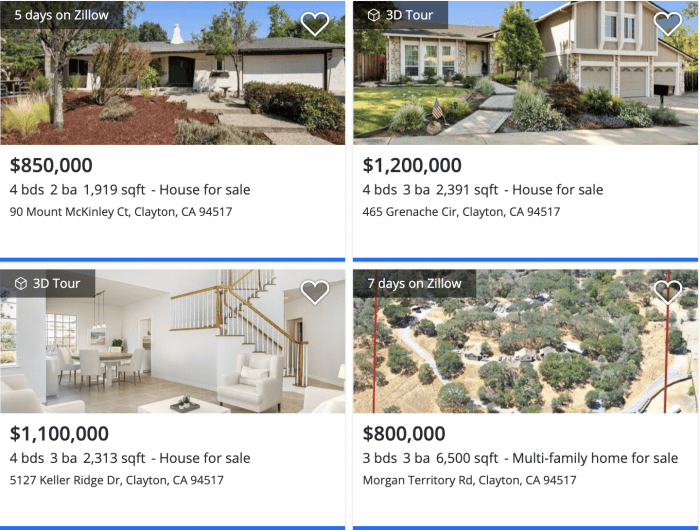 Clayton is technically a small city of its own located just outside of Concord, but it’s still close enough that you might want to consider moving there for its better crime rate and more abundant nightlife, but be warned of the higher cost of living. 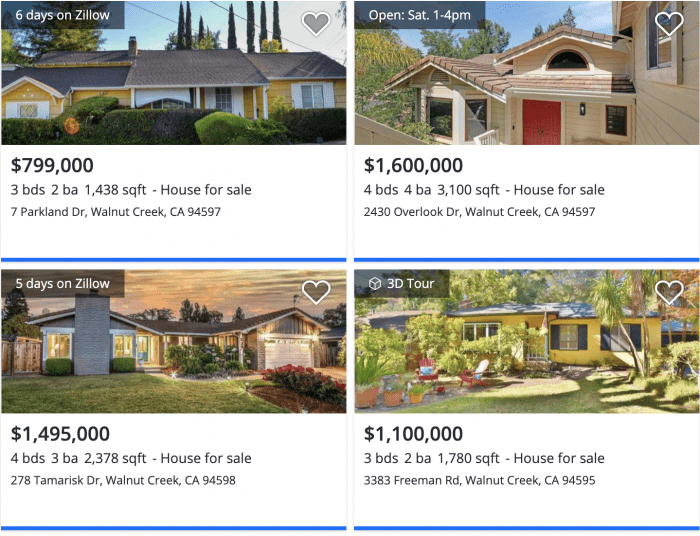 Or, if you’re willing to go a bit further outside of the city, Acalanes Ridge, located in the city of Walnut Creek, offers a much lower crime rate along withsome of the top employers, great amenities, and the best high school district in Contra Costa County, albeit for a cost of living that’s nearly 50% higher than the rest of the state.

Also, if you are coming from out of state, be sure to have a look at our out-of-state moving guide for more info and tips.

And before you move, be sure to make sure you’re actually allowed to park a moving vehicle outside of your new place.

To figure out exactly what you’ll need to do, check out the Concord parking and storing vehicles code enforcement document.

You’re officially a resident of Concord! Now there are just a few logistical things to take care of and you can consider your move complete.

If you’re trying to get a feel for what sorts of recreational activities Concord has to offer, the best place to look first is usually going to be the City of Concord’s own Visit Concord site. 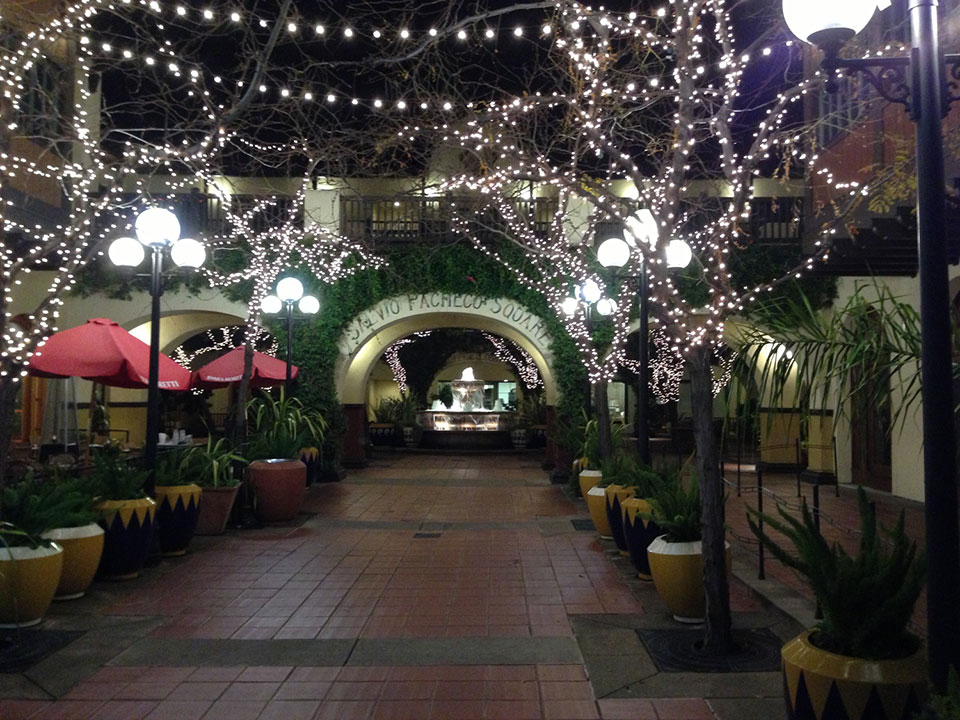 And you’ll also want to have an idea about the restaurant scene in Concord, which can be a bit difficult. To get you started, this site has a decent list of places to check out.

If you’re looking for something a bit greener, TripAdvisor has a pretty solid list of Concord’s best parks, like Mount Diablo.

That’s pretty much it, you’re ready to move to Concord! Let us know if we missed anything in the comments.