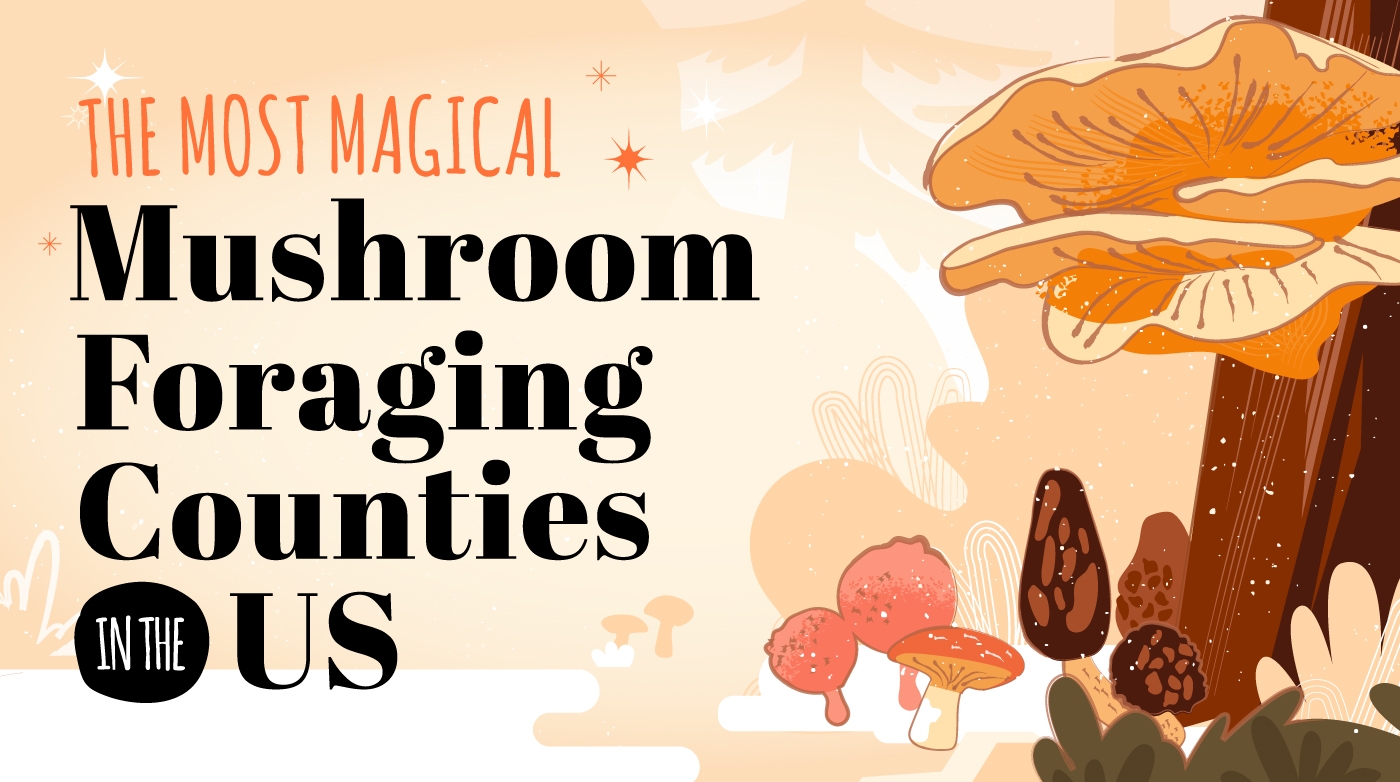 Looking for a pandemic-friendly past-time that will get you out into nature? Mushroom foraging can make for a delightfully delicious, immensely educational, and sometimes even trippy hobby.

As the world went into lockdown in the spring of 2020, the old-timey hobby of mushroom foraging experienced something of a renaissance.

Mushroom foraging is a rewarding past-time that offers ample opportunities to enjoy and learn about the natural world, all the while potentially finding some tasty, healing, or psychedelic treasures.

But, where to begin? iNaturalist, a wildlife identification and observation app used by 1.8 million hobby- and professional naturalists worldwide, is a great place to start.

We dove into every scientific-grade observation of wild fungi ever recorded on iNaturalist in order to find the most prolific regions for mushroom hunting in the United States.

Whether you’re a beginner just starting to learn how to safely identify wild mushrooms, an advanced mycophile looking for the most fruitful fungi foraging regions in America, or a psychonaut hunting for psilocybin, we’ve amassed the best places in the U.S. to get your ‘shroom on.

Reminder: mushroom foraging is not without risks 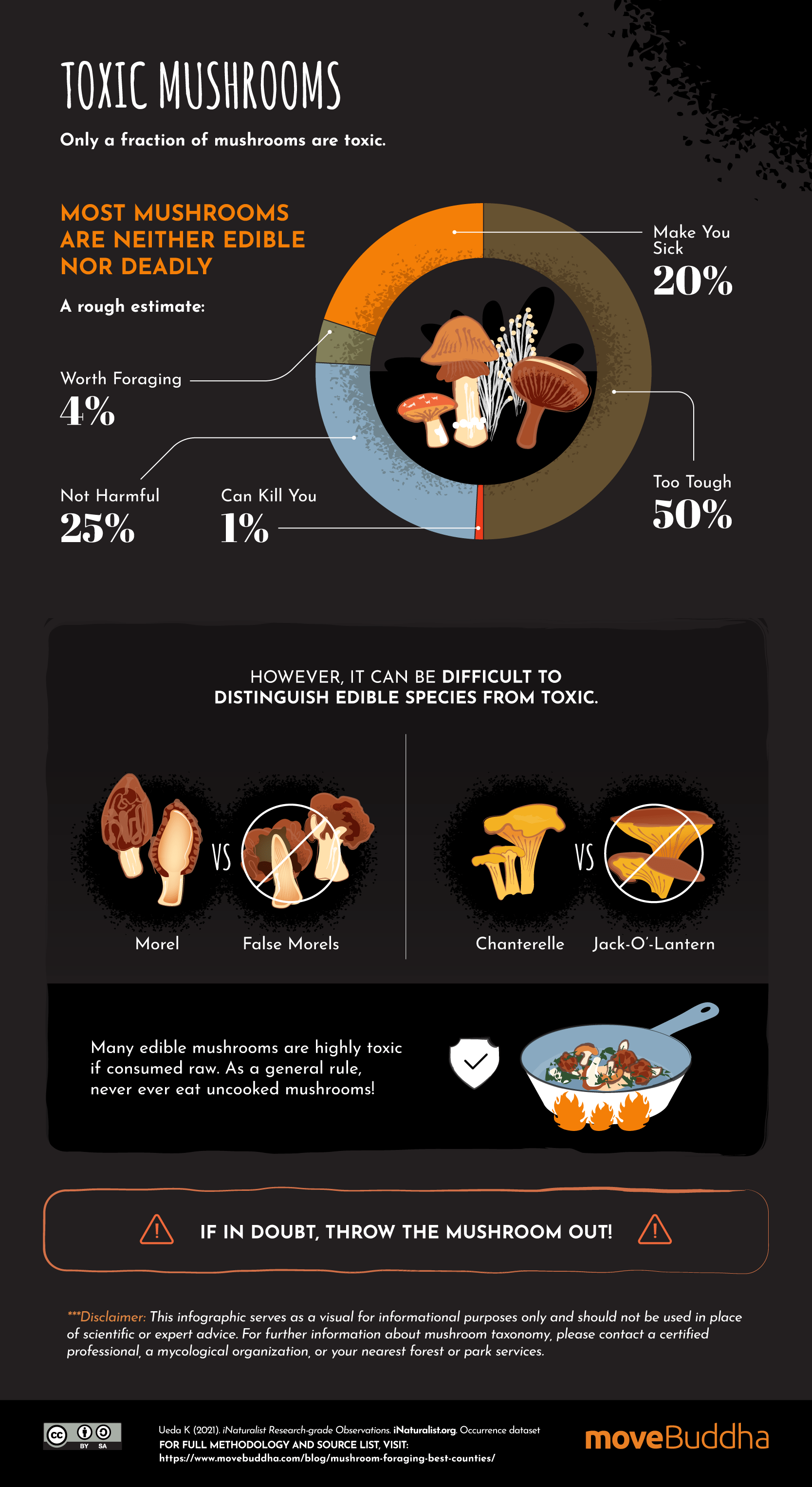 The consumption of wild mushrooms comes with serious potential risks.

Mushrooms can be poisonous to eat, with effects ranging from gastrointestinal distress, to organ damage, to death. Some edible mushroom species are toxic if eaten raw, in combination with alcohol, or when befallen by mold.

The authors of this study do not in any way condone consuming wild mushrooms that have not been identified as safe to eat by experts.

This piece is in no way intended as a guide for identifying wild mushrooms.

Eager to learn about mushroom foraging, but not sure where to start? One of the following 25 U.S. counties would make for the perfect place for a beginning mycophile to start learning about regional fungi species and their identifying characteristics.

We ranked these counties based on the rate of iNaturalist fungi observations relative to the population, as well as the prevalence of mycophile meetup groups and community events such as foraging festivals.

Unsurprisingly, the Pacific Northwest features heavily in this list, with 9 of 25 counties falling between Northern California and Washington State. With cool weather, many old growth forests, and heavy annual rainfall, these regions are veritable hotspots for fungi. But more than that, they are also home to some of the most prominent mycological societies and foraging festivals in the country — and thus the perfect places for beginners to receive expert guidance.

For instance, the Puget Sound Mycological Society located in King County, WA hosts a diverse array of events every month, ranging from workshops on microscopic identification, to guided hikes, to lectures from famed mycologists.

And in Lane County, OR, near Eugene, the annual Mount Pisgah Mushroom Festival, hosted by the Cascade Mycological Society and Lane Community College, showcases hundreds of species of local fungi — including tasting booths, guided nature walks, and more.

But you don’t need to live in a region with perfect environmental conditions to start a mushrooming hobby! Fungi are very tenacious and grow year-round all over the world.

Though desert regions like Los Angeles County, CA, and Bernalillo County, NM may not be famous for their biodiversity of fungi, they are home to vibrant communities of fungi enthusiasts. In addition to relatively high rates of observations made by dedicated iNaturalist users, beginning mycophiles will find plenty of experts and hobbyists alike to help teach them how to find mushrooms in the desert.

Note: Keeping tabs on mushroom events can be tricky. We advise keeping tabs on updates from local mycophile organization sites or one of these two resources: The Mushroom Company Events and Mushroom Events of the USA in order to find the most recent details about mushroom festivals and events.

The 25 most fungi-prolific U.S. counties

Are you an experienced mycophile looking to explore mushroom wonderlands where competition with other foragers is low?

We ranked the top 25 counties in the U.S. based on the rate of iNaturalist fungi observations relative to the population. From the Midwest, to the Sierra Nevada, to wild Alaska, here are the counties where mushroom hunters could strike gold:

Alaska’s brief but plentiful mushrooming season is the stuff of mycophile legend. Covered in snow for the majority of the year, Alaska in late summer to early fall is a time when mushrooms can be found almost everywhere you look. Three of our top counties for mushroom observations are located here: Sitka, Skagway-Yakutat-Angoon, and Denali Borough Counties.

But you don’t need to trek as far away as Alaska to find fungi treasure troves.

In the Mid-Atlantic, there are many mushrooms to be found between upstate New York (Hamilton County), down through Eastern Pennsylvania (Forest, Clarion Counties), into West Virginia (Tucker, Pendelton Counties), and down to Virginia (Richmond, Norton Counties).

Psilocybe is the most common genus of psychoactive mushrooms, with over 200 species growing across every continent. 22 different species of psilocybin mushrooms grow in the United States, with different species favoring different regions and growing conditions.

We explored iNaturalist data for observations of Psilocybe species across the country to find out which regions are hotspots for these trippy little mushrooms.

The Pacific Northwest is by far the best place in America to go looking for psychedelic mushrooms, with 15 of our top 25 cities being located between the Bay Area and the Canadian border. Here, Psilocybe cyanescens, commonly known as the Wavy Cap, is the most commonly observed psilocybin mushroom among iNaturalist users.

The cattle pastures of south and east Texas are also a good place to go hunting for psychoactive mushrooms. Rusk and Dewitt Counties feature high rates of observations for Psilocybe cubensis, colloquially known as Magic Mushrooms. This species also grows well in humid central Florida, such as in Highlands and Alachua counties.

Our analysis of the best counties in the U.S. for fungi foraging are based on research-grade observations of fungi reported in iNaturalist.

We sorted this data from iNaturalist based on the following criteria:

Additionally, we used the 2020 County Population Estimates reported by the U.S. Census Bureau to calculate the rate of observations per 1,000 residents.

To measure the presence of a mycophile community in each county, we factored in the number of foraging groups registered on Meetup.com, the number of festivals listed on Wikipedia, as well as the number of clubs affiliated with the North American Mycological Association. Each county was scored according to the prevalence of these factors, with festivals and large events receiving a weight of 75%, and clubs and meetups 25%.