There’s no way around it — moving is expensive.

So it’s not surprising that people are always looking for ways to save money when it comes to moving expenses.

Moving tax deductions were a great way for many people to reduce their move costs by hundreds if not thousands of dollars.

So it’s a real bummer the 2017 tax reforms all but eliminated moving tax deductions for the vast majority of people.

Unless you’re in the military, all moving related expenses are no longer tax deductible starting 2018.

To make matters worse, many “how to save money moving” articles haven’t been updated and still list moving tax deductions as a top way to save money.

In this article, we’ll clear the air and explain exactly what changes were made to the moving tax deductions. We’ll also touch on how you can save money if your moving expenses aren’t tax deductible at all.

Before the tax reforms went into effect in 2018, there were many ways you could use tax deductions to save money.

If you were moving for work, the IRS allowed you to deduct all expenses that were necessary in order for you to move. You had to meet a few requirements that proved the move was work-related:

By meeting both requirements, you could prove to the IRS that your move was necessary because of work. You could then deduct any necessary expenses related to the move, including:

The Act passed in 2017 and came into effect in 2018. Among a ton of tax reforms, it suspended the moving tax deduction for most people. That means that most people’s moving expenses are no longer tax-deductible.

The exception is if you’re an active military member moving because of a military relocation. In that case, your moving costs are still deductible. For anyone else, though, the moving tax deduction is effectively dead.

What’s even worse is that if your employer pays for any part of the relocation cost, that money counts as taxable income now. Instead of seeing your tax bill go down because of a move, many people now have to pay more taxes if they move for work. Ouch.

Like we said above, if you’re an active military member and you’re being relocated, your moving expenses are still tax-deductible.

For anyone else, though, things get tougher.

If you moved before 2018, your moving expenses may still be tax-deductible. As long as you meet the time and distance requirements. You’re also exempt from the time requirement if you’re laid off for any reason other than misconduct. Or if you can’t work the required 39 weeks within the first year after your move due to a disability.

One other exemption exists, but it will only apply to a small number of movers. If you’re moving back to the U.S. from overseas to retire, you don’t have to work at a new job to claim moving expenses. But again, that’s only if you moved in 2017 or earlier.

For people who have moved since the law went into effect, tax deductions may still apply on state taxes. Unfortunately, this is very much determined on a state-by-state basis. To find out if your moving expenses are deductible on your state taxes, check your state’s tax codes. See if they update automatically when new IRS rules go into effect. Some states require state legislation to pass to incorporate new federal rules. Some states, like New York, passed their own legislation explicately saying they weren’t adopting parts of the Tax Cuts and Jobs Act, so look for that, too. If you’re having trouble finding your state’s tax codes or the applicable law, a local tax professional, like a CPA, can definitely help.

So now that, for most people, a tax deduction is off the table, how can you scrape dollars off the price of a move? There are a lot of different ways you can save, just by putting a little more time and effort into the move. Here’s how you save on your move without any tax deductions (and maybe save even more than you would have before the Tax Cuts and Jobs Act).

Do As Much of the Move As Possible Yourself

By renting a moving truck, packing all your belongings yourself, and doing all the loading and unloading, you can save a ton. If there are tasks you can’t do yourself, consider hiring help just for those jobs. You can still do everything else on your own or with the help of family and friends. If you can’t drive a moving truck, look into containers and freight services.

Shop Around to Compare Prices

Instead of hiring the first moving company you get a quote from, take the time to shop around. Get quotes from as many companies as possible, including truck rentals, brokers, container companies, and full-service movers. Get detailed quotes and know exactly what is and isn’t included in the price, so there are no surprise costs later.

Try to Negotiate with Your Moving Company

This one may have mixed results, but some moving companies offer price matching or allow haggling. See if your moving company is willing to help you out. Either by applying a promotional discount, a seasonal deal, or knocking a few dollars off the price of your move. The worst that can happen if you ask is that they say no, so why not try? 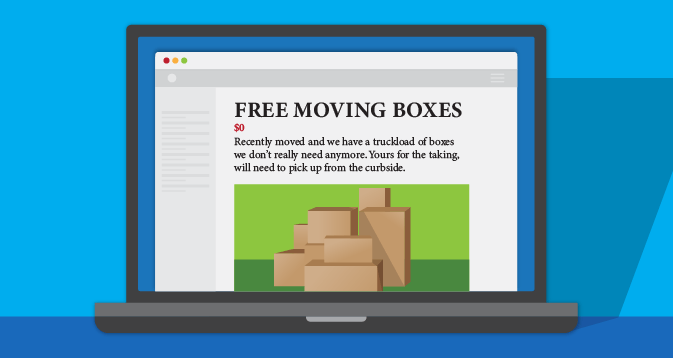 Many stores will be happy to give you discarded cardboard boxes for cheap or free. Check Craigslist for people who just moved and are trying to offload their moving supplies. They might be willing to give you a good deal if you take everything off their hands. See our guide on where to find free moving boxes.

Schedule Your Move for the Off-Season

Spring and summer are peak moving times. So are weekends. Because so many people move at that time, the demand for trucks and moving companies drives up prices. Avoid those increased costs by moving during fall or winter, and mid-week or mid-month. If you’re flexible with your exact move date, you may be able to get a better price. And plan your move as far in advance as possible to take advantage of the cheapest dates and best deals.

Try to Move Less of Your Stuff

The more belongings you have, the more expensive it’ll be to move them. So instead of packing up everything you own to take to your new home, sell or donate some stuff. Not only can you make a few bucks from selling things, but the cost for your move will come down if you’re moving less.

Try to Negotiate Moving Costs With Your New Employer

If you’re relocating for a job, negotiate reimbursements for moving costs with your new employer. Keep in mind though, that under the Tax Cuts and Jobs Act, this money will count as taxable income. Make sure to plan for that if you decide to go this route

If you’re planning to move you can still save money. The first thing you should do is get a rough idea of what your move might cost across as many companies as possible. Compare cost estimates from multiple movers you can trust with MoveBuddha.