If you love cheese curds, want access to extremely fresh produce, and want to live in one of the nation’s best hubs of medicine and technology, you should definitely think about moving to Madison, WI. 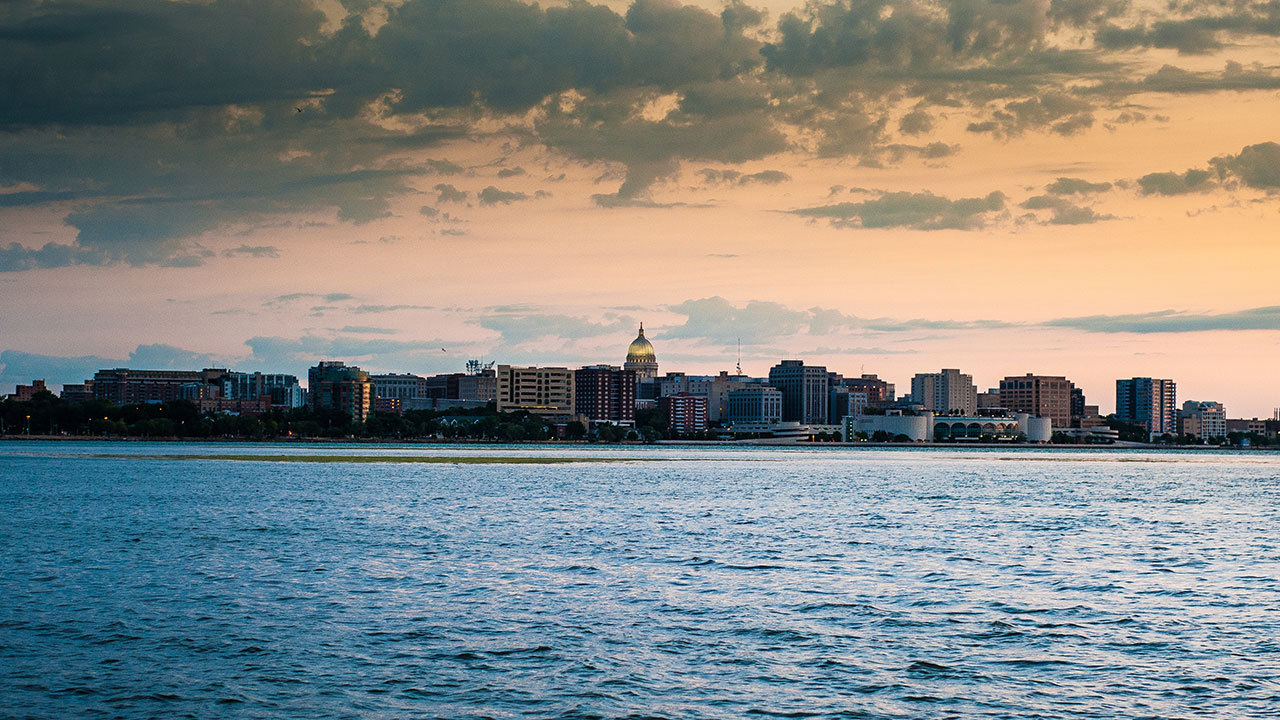 Madison is one of the most popular cities in the Midwest amongst both families and young professionals for good reason. With solid real estate options, steady job growth with a low unemployment rate, and good job opportunities, the Madison area is a great choice.

The “City of Four Lakes” is nicknamed for its surrounding waters of Lake Monona, Lake Mendota, Lake Waubesa, and Lake Kegonsa. If you’re into kayaking and lake life, think about moving to Madison.

But hey, we get it––whenever you’re moving to a new place it can be overwhelming to keep up with everything; that’s where we come in.

Our guide will provide you with all the important details you’ll need to prepare for a move to The Mad City.

And if you’re looking for more info on moving to Madison, check out our Madison move cost guide.

Before we dive any further, check out this video to familiarize yourself with Madison’s beautiful cityscapes!

Madison’s neighborhoods are divided into three distinct areas by Lake Mendota, Lake Monona, and the Isthmus that lies between them. 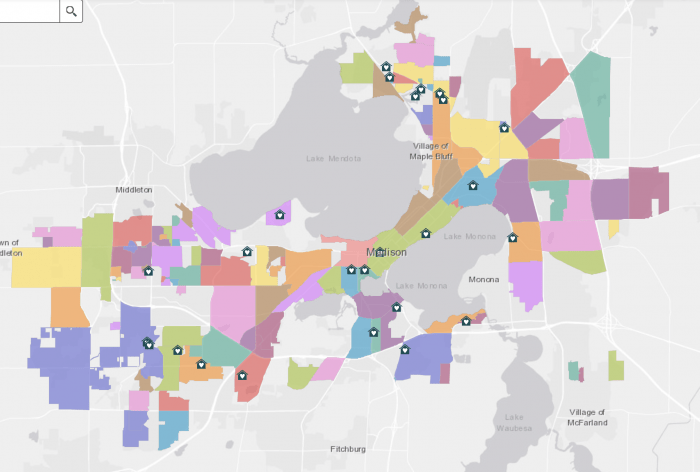 West Side: Home of the University of Wisconsin-Madison, the area west of the Isthmus naturally attracts a lot of students, but also features many family-oriented suburbs.

Isthmus: This small strip of the city is home to some of the city’s oldest and most prestigious neighborhoods.

East Side: This side of town is somewhat more suburban but still features many beautiful historic neighborhoods and is home to The Governor’s Mansion.

Here’s how the pricing breaks down 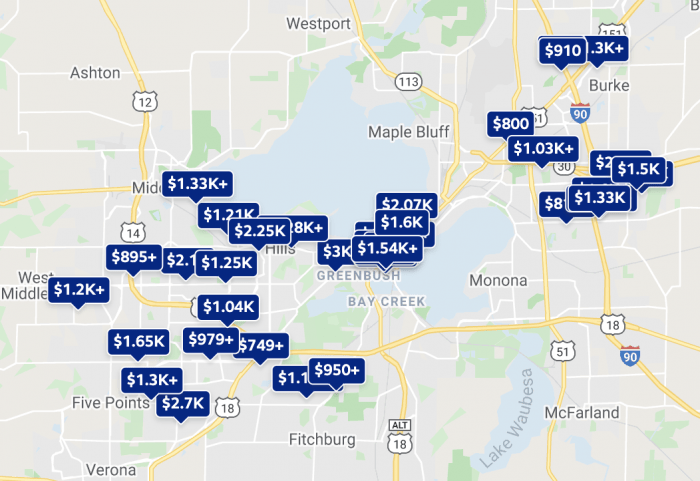 But the cost is only one factor when it comes to deciding where you’re going to live. You also need to make sure you actually enjoy being a part of the community you’re moving into.

Look, everyone would prefer to live in a neighborhood that fits their personality. Fortunately, Esri’s Zip Tapestry Tool makes it incredibly easy to find places with people who share your lifestyle. 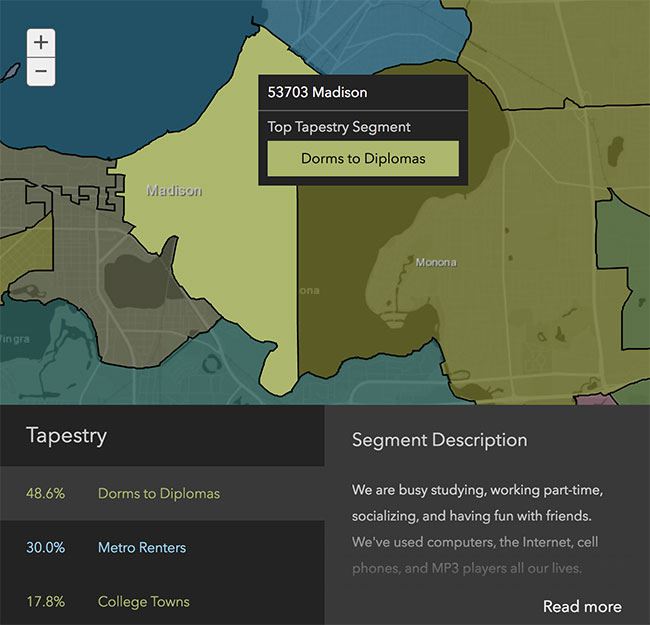 For example, looking up the zip code of Capitol (53703) will show you descriptions and distributions of the three largest demographic groups in that area. Pretty neat, huh? This will help you narrow down the crowd you’re looking for––from college kids to retirees.

Now that you’ve found awesome neighbors, let’s make sure you’re close enough to work to get there on time.

Madison is a fairly car-dependent city. Luckily, it doesn’t have many of the traffic problems that tend to plague major cities.

Delays when driving in Madison

Most commute estimates you’ll find online should be fairly accurate but typical delay factors like snow or sporting events can increase commute times by around 25%, so as long as you’re aware of when the Badgers play and you don’t mind sledding to work some days, you’ll be fine.

But what if you don’t want to deal with all the hassles of driving? Madison has a few decent public transit options.

While Madison’s public transit system leaves a lot to be desired, it’s a pretty walkable and extremely bikeable city.

A 48 walk score means, more or less, it’s possible to get around by walking in the more densely populated areas of the city like Capitol, Downtown, and the areas around the University of Wisconsin.

But you can’t exactly walk everywhere. 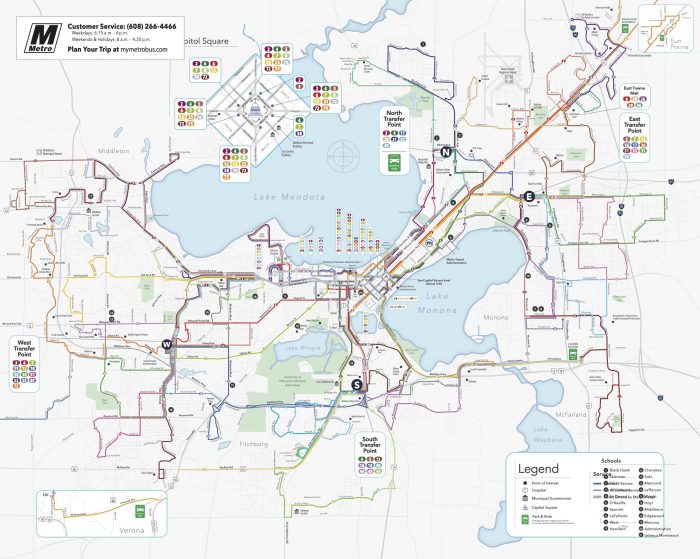 The problem is, the bus system has a fairly limited reach and the schedule isn’t super convenient.

As with walking, you’re kinda out of luck unless you’re in an urban area of the city.

Madison is, however, a great city for cyclists

With a Bike Score of 65, Madison has fantastic cycling infrastructure which can all be found on the Bike Madison site. 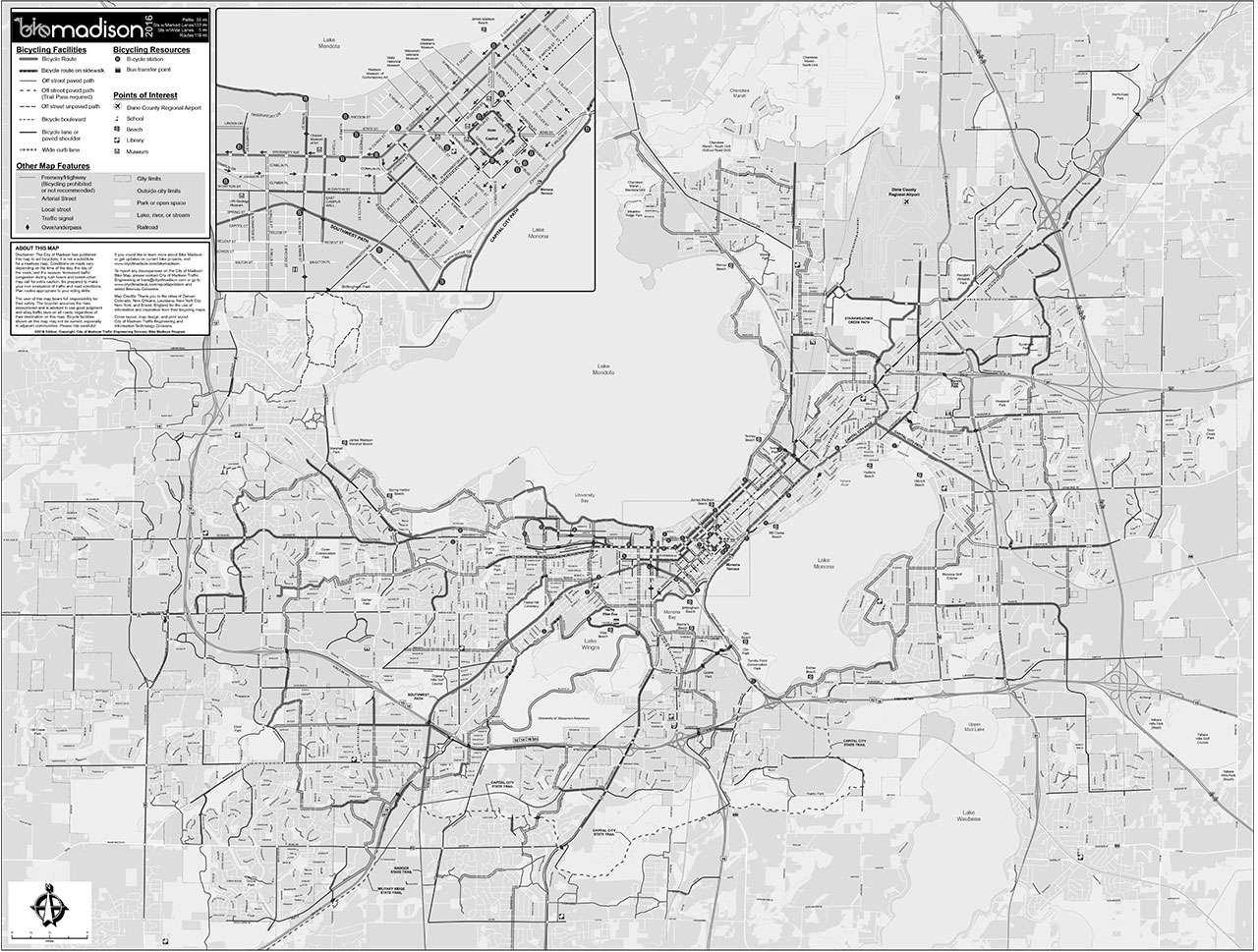 Notice how much more extensive the bike paths and bike trails are than the bus routes.

Madison is relatively safe compared to other major cities

NeighborhoodScout has Madison’s crime score listed at 16 out of 100. 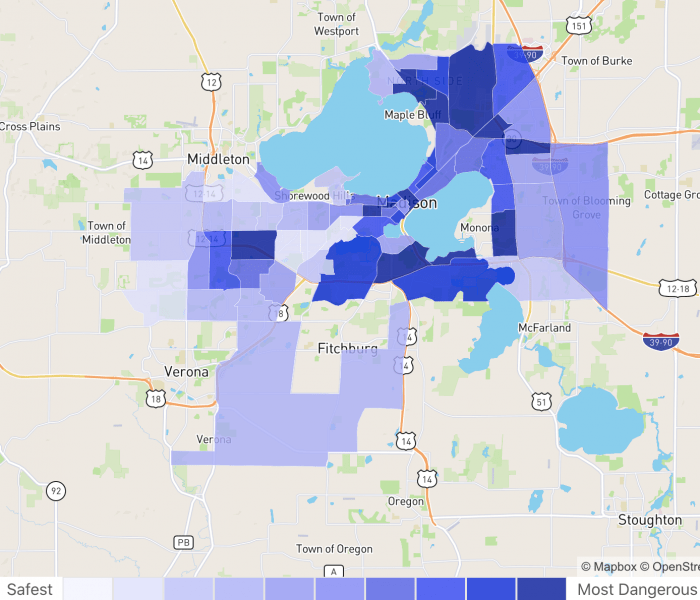 While that doesn’t seem great, a closer look reveals that less than 10% of reported incidents are violent crimes.

Property damage and vandalism are still bad, but they’re no reason to be scared away from perfectly good areas.

For the most part, crime really isn’t a big issue in Madison.

Cool, now that we’ve gotten the bigger details out of the way, it’s time to dig into figuring out where to live.

Before you rent a place, always consider what accommodations you’ll need.

As a friendly reminder, Madison is not only located in the Northern Midwest, but also near two sizable bodies of water. Because of this, you should be prepared for some cold, cold winters. 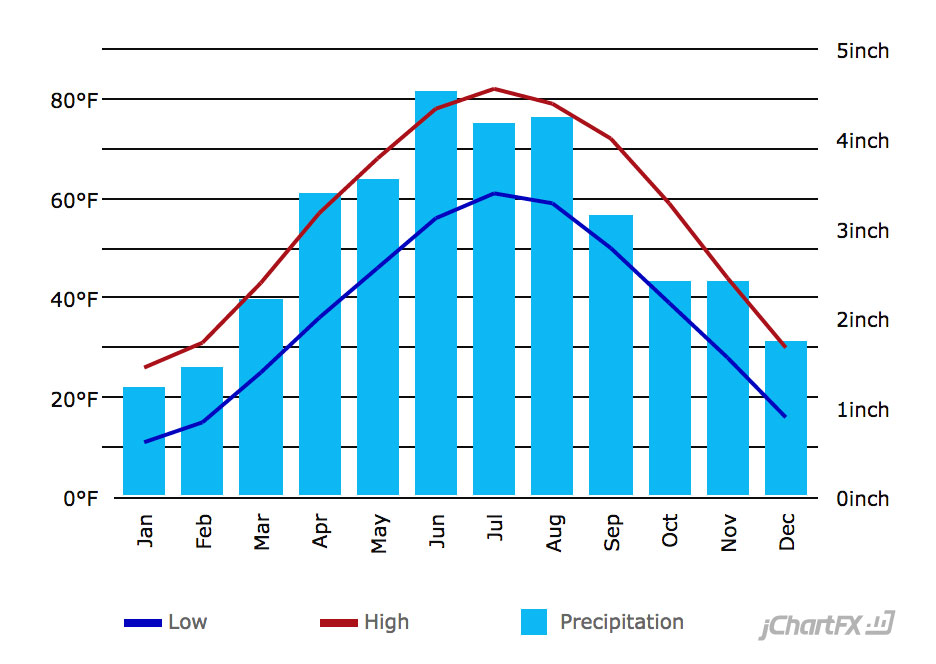 Also, Midwest summers are a lot hotter than people give them credit for.

You’ll spend a solid three months wishing the sun would just go away.

Basically, your apartment needs access to heating and air-conditioning.

With things getting so cold, you should think about your average monthly gas bill as you think about how much you can spend on rent.

Even though some areas are pretty walkable, you’d be smart to find a place with washer/dryer units included since laundromats tend to be scarce outside of the downtown areas.

Where to look for apartments

Here are a few of our favorite sites for finding apartments. They each feature pretty great search functions that help you to narrow results down to your preferred number of bedrooms, price, amenities, etc.

You might have some justifiable hesitation, but Craigslist can be a pretty solid source for finding affordable rentals in Madison, so long as you know where to look.

Renting in Madison is relatively affordable compared to other major cities and college towns.

The city’s rental market isn’t in awful shape at the moment.

From 2021 on,, rent in Madison has increased by 6%, which isn’t substantially higher than the overall average rent increase throughout the US.

At the same time, Madison’s vacancy rates have decreased to 3.4% which isn’t great, but is less than the national average.

Wisconsin rental laws you should know

Then again, maybe you prefer a more permanent living situation.

In which case, you should consider checking out these areas of Madison that have been ranked as some of the best suburbs in the country. 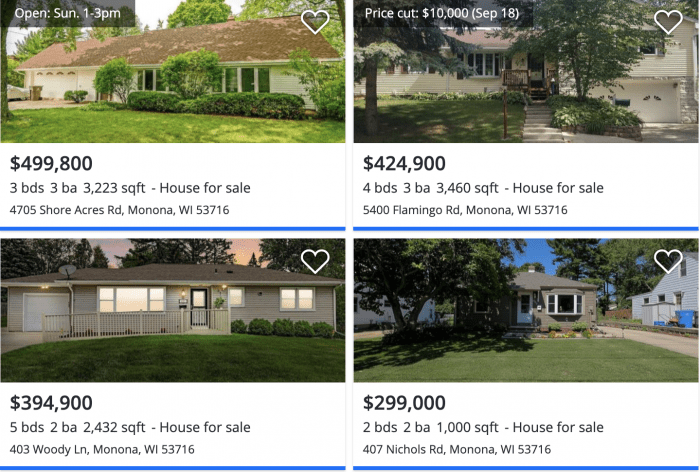 Monona is a small suburb bordered by Madison proper and Lake Monona that packs all the amenities of the city, combined with access to grocery stores and decent school districts, it’s a perfect, cozy suburban package. This is the perfect spot for someone who wants to live in the ‘burbs’ but still have easy access to the big city. 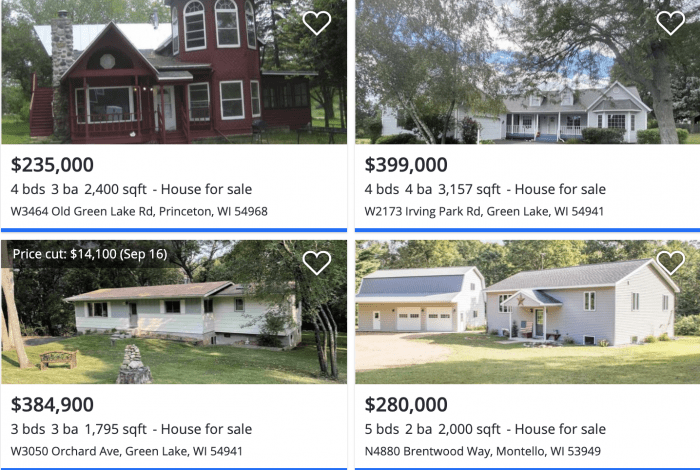 Meanwhile, Marquette is a solid suburb located near the UW-Madison campus. It’s far enough to be a fairly quiet and calm area but still close enough to provide plenty of things to do. It also tends to bring in a lot of recent college graduates and young families who are attracted to both the location and it’s moderately-priced homes and rentals.

Also, if you are coming from out of state, be sure to have a look at our long-distance relocation guide for more info and tips.

In general, the city would prefer you park moving vehicles on private property, such as a driveway or parking lot.

Sometimes, the only option is parking on the street, though. That’s where permits come in.

If you find yourself in need of a special Street Occupancy Permit, you can apply for one here.

The city of Madison has a wide range of great things to do, but the sheer number of options can be a bit overwhelming. 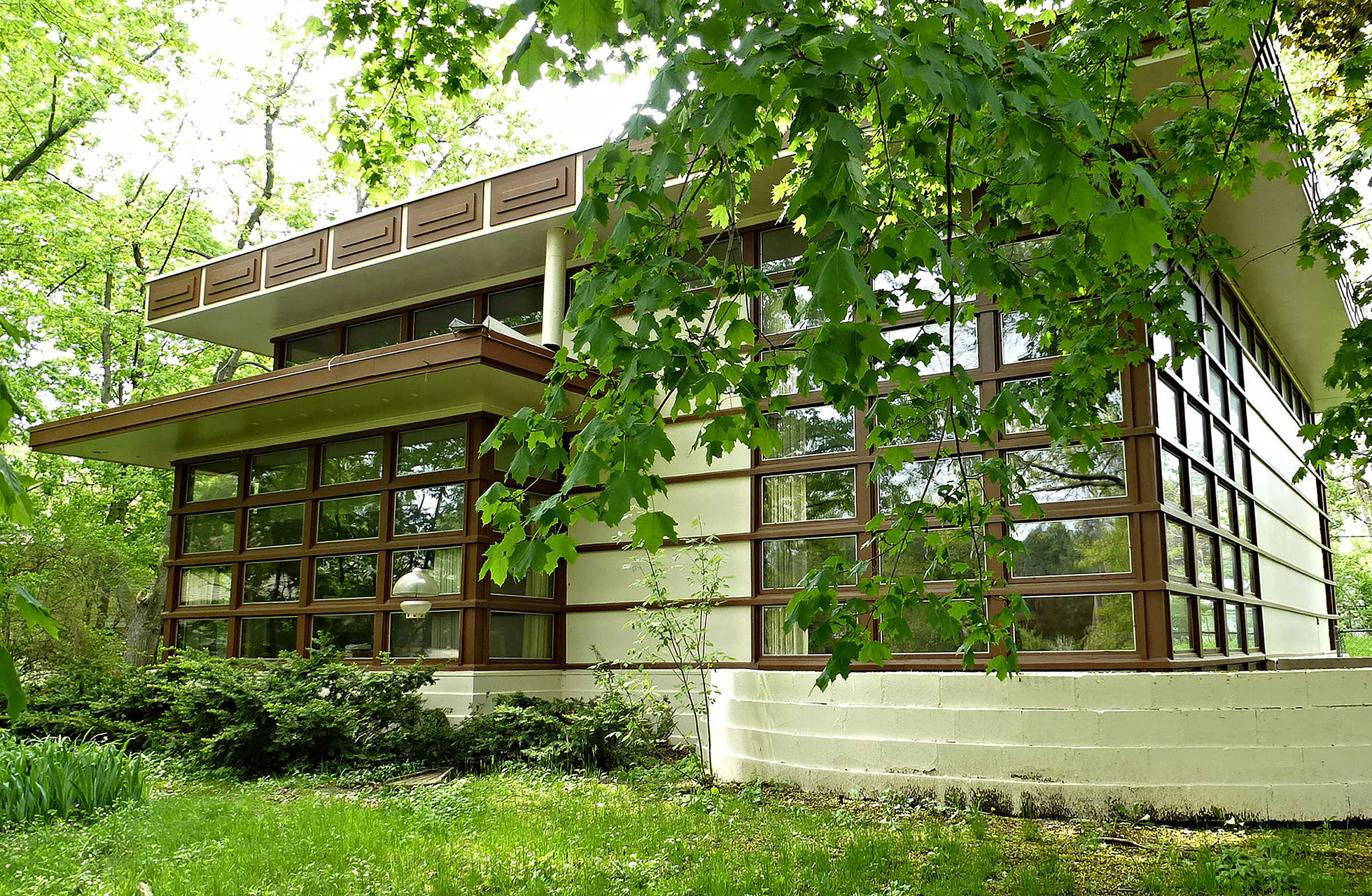 Here are a few go-to’s: Badgers games, Vilas Zoo, the Dane County Farmers Market, and basically anything going on around State Street.

If you’re in the mood for something a bit livelier, the city’s full of nightlife to fit any personality. From the chill vibes of the Vintage Spirits & Grill and the music scene at High Noon Saloon to Five Nightclub’s bumping dance floor, there’s a little something for everyone. 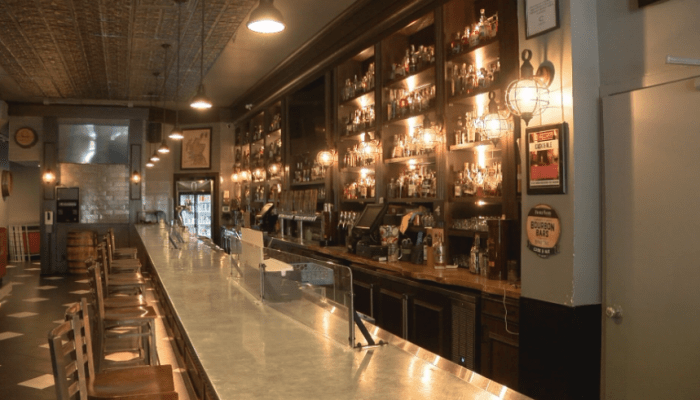 Bar hoppers in Madison will also find a lot to love with Cask and Ale’s immense whisky and spirit selection as well as the dive-y charms of Le Tigre Lounge. There’s also something for you if you’re into the the upscale exclusivity of Merchant Madison’s food and cocktails.

Moving to Madison? Let us know what we missed in the comments! 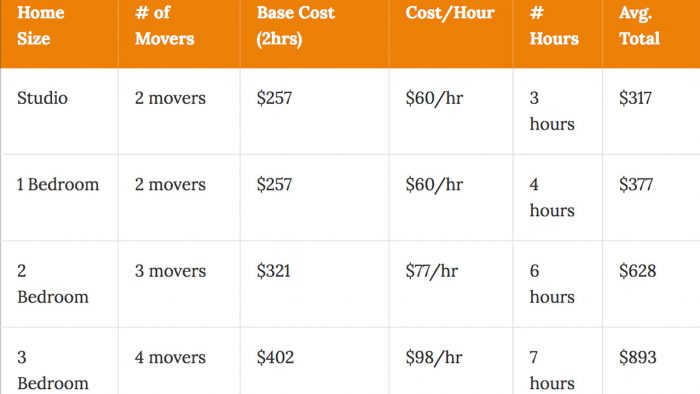 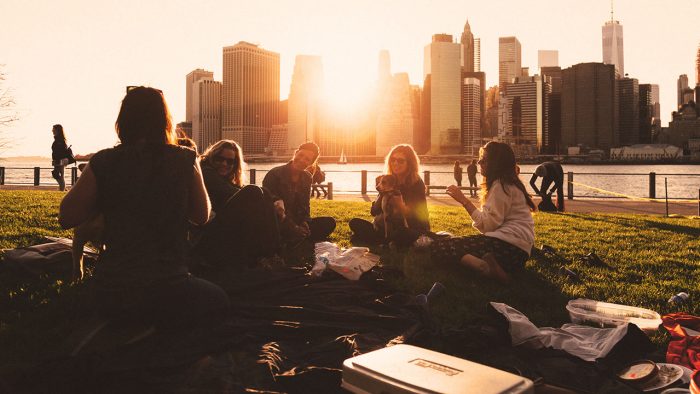