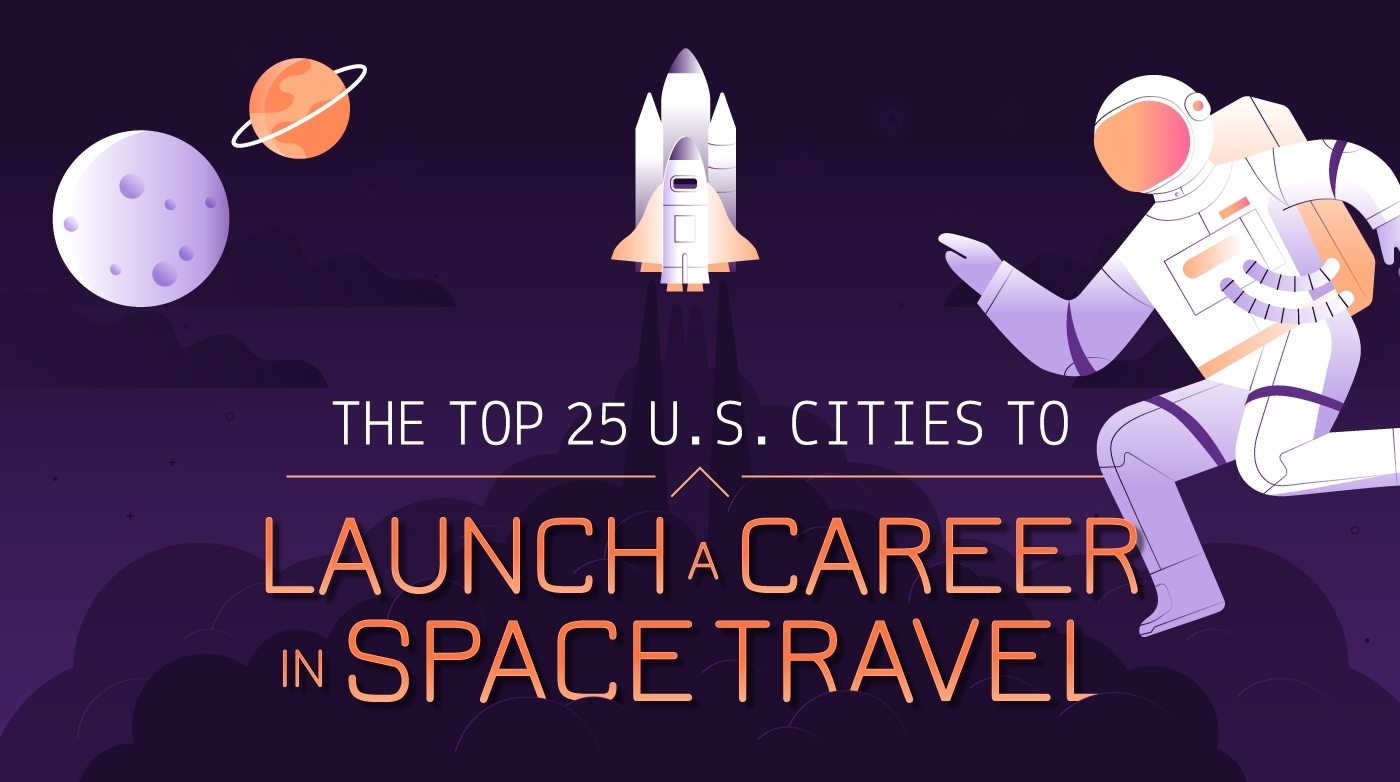 Some careers never go out of style.

The mythical status of astronauts is as powerful today as it was in the days of the original Apollo 11 moon landing. When NASA opened applications for its Artemis Generation of astronauts in 2020, a program to include Mars exploration, they received more than 12,000 applications in just a few short months.

The Space Race has evolved since the Cold War era. Instead of the main players being warring national superpowers, today the most hotly discussed space exploration efforts are those funded by your friendly neighborhood billionaire.

Private enterprises such as Elon Musk’s SpaceX have plans to colonize Mars by 2050, while Richard Branson’s Virgin Galactic is working to create a market for space tourism, and Jeff Bezos’ Blue Origin envisions a U.S. industrial base in space.

Only 600 people in the whole world, both living and dead, have ever been trained as astronauts. But if the ambitious plans of SpaceX, Virgin Galactic, and Blue Origin are going to be realized, the world will soon be needing a lot more astronauts.

We analyzed which cities in America offer the best combination of factors to support the rigorous mental and physical prowess demanded of astronauts. If you dream of floating among the stars, here are the best cities to launch your space career.

Planning a move? Use our moving cost calculator, or check out the best moving companies and containers.

Our analysis of the top cities for aspiring astronauts was limited to U.S. cities with populations of at least 150,000 residents according to the 2019 census estimate. We ranked cities based on scores assigned for three key areas of data: educational opportunities, health and environment, and job opportunities. Read an in-depth explanation of our methodology here.

For education, we scored cities based on their proximity to astronomical observatories and the number of degree programs at nearby universities in related fields – these range from Aeronautical Engineering to Materials Science, and were compiled based on the degrees held by current and past astronauts.

Because astronauts need to have prime physical health, we devised a cumulative health score for each city based on the prevalence of adult diabetes, the regional quality of life, and the air pollution for the area.

Finally, we analyzed the job prospects for aspiring astronauts in each region by scoring the percent of the population who hold degrees in STEM as well as the proximity to astronomical facilities, space exploration companies, NASA locations, and ULA locations.

Here are the results:

The unequivocal best region for aspiring astronauts is the Washington, D.C greater metropolitan area, including D.C. proper as well as Virginia suburbs Arlington and Alexandria. These three cities occupy the top positions on our list.

In addition to a number of prestigious universities in the area offering relevant degree programs and a healthy population and environment, the D.C. area is among the densest in the country when it comes to job prospects related to space travel and astronomy.

D.C. is home to NASA’s headquarters, a SpaceX office, a number of national observatories, the National Air and Space Museum, offices for the ULA, and dozens of other aeronautical and defense laboratories and institutions.

See the complete rankings in this spreadsheet.

The best cities for job opportunities in space travel

Though astronauts get most of the accolades, it takes hundreds if not thousands of hard-working people on Earth to launch a human into space. From rocket scientists to systems engineers to space industry weather scientists, there are many brilliant minds working behind the scenes to make space exploration possible.

Maybe being an astronaut isn’t in the cards for you, but you can still put your brain to work in the space sector in one of these 25 cities, selected for their high concentration of residents with STEM degrees and proximity to job opportunities in space travel, astronomy, and aeronautics.

The best cities in which to raise a future astronaut

Just about every child dreams of becoming an astronaut. But with astronauts being such an elite group, it’s never too early to get started on helping your child reach for the stars.

Kids who are bent on becoming astronauts would do well to grow up with excellent physical health, a STEM-focused education, and early exposure to space exploration topics.

Here are 25 cities where children not only grow up strong but are also more likely to receive a top-quality STEM education and be able to visit observatories and other space travel facilities. 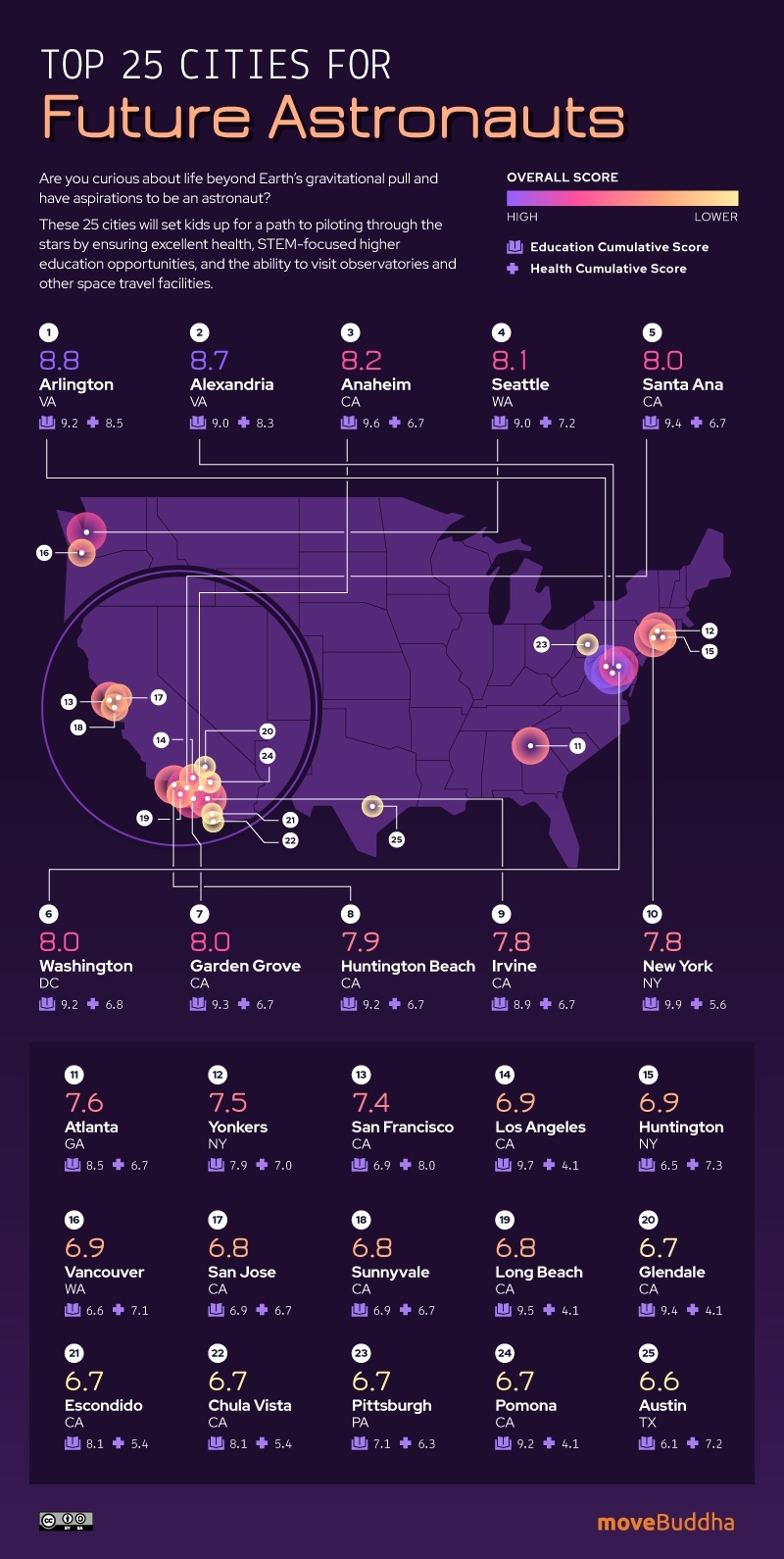 Our analysis of the best cities for astronauts was limited to U.S. cities with a population of at least 150k according to the 2019 census estimates.

Each city received a 0-10 score for three categories; these three scores were averaged together to calculate a final score, which was used to rank the cities.

The three categories, and the factors included in the scoring, are as follows: