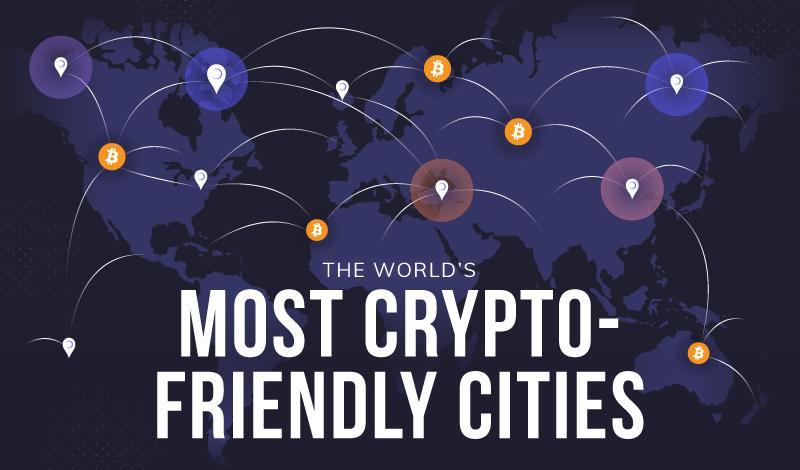 What are the most crypto-friendly cities in the world?

Well, there’s not much in official government data to point the way. So we looked into some alternative sources using the prevalence of bitcoin ATMs and Twitter user data as proxy metrics. (Our moving cost calculator costs 0 bitcoin to use btw, just saying.)

While North America may be the biggest trailblazer in terms of rapidly normalizing cryptocurrency and blockchain, this adoption isn’t taking place everywhere at the same speed – in fact, some small cities are outpacing large metropolitan areas. It might be worth it to relocate to a less populous city.

Despite comparatively lower numbers of bitcoin ATMs outside of North America, these crypto-kiosks also have a noticeable presence in many other countries around the world, including nations with much smaller economies than the U.S. or Canada (like Tbilisi, Georgia!)

Finance writer Jastra Kranjek writes that bitcoin ATMs are becoming an increasingly common fixture “in countries with volatile financial markets whose citizens require a quick exchange of an official currency for a digital asset not regulated by the government.”

Want to know which lesser-known cities around the world are poised to rival major metropolitan areas in terms of bitcoin adoption? Want to live in a city where you’re never too far from a bitcoin ATM or someone taking up time to send out tweets on the topic?

Explore the following lists to learn where in the world bitcoin enthusiasts and those fluent in crypto-culture are popping up in droves – some locations may surprise you. 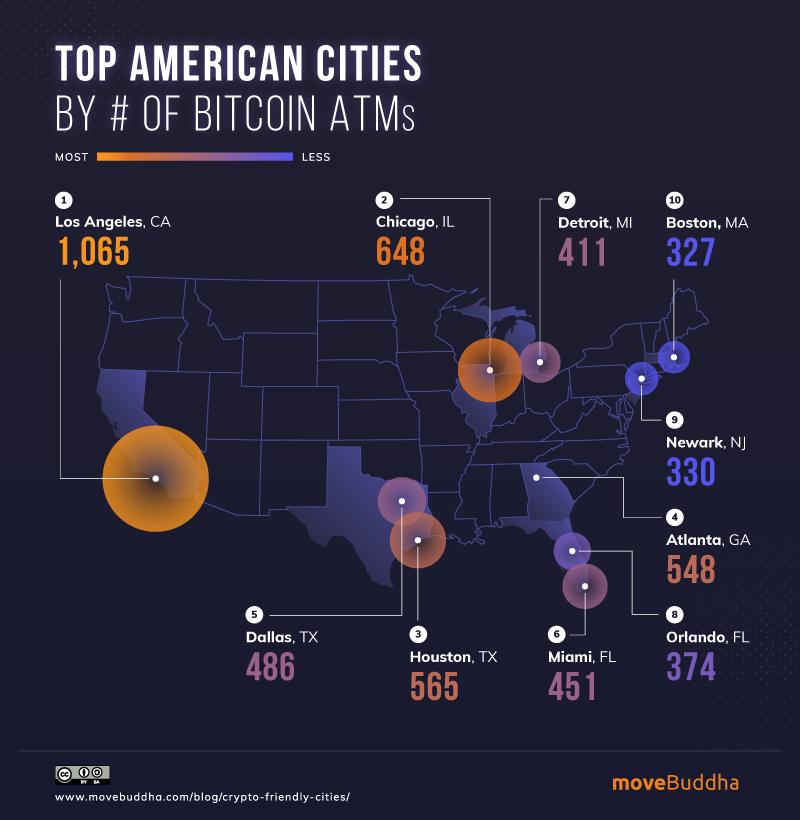 As bitcoin adoption continues to rise around the globe, a growing number of retailers and other business owners are installing bitcoin ATMs in their businesses.

A quick and easy way for users to withdraw and sometimes even purchase the world’s most famous cryptocurrency, bitcoin ATMs can be a passive yet lucrative form of income for operators. Installing these kiosks can also distinguish a business as particularly tech-forward and capture profit from spontaneous purchases.

The United States are currently leading the world (by a tremendous margin) in the number of operating bitcoin ATMs. As of March 2021, there were 14,762 bitcoin ATMs operating within the U.S., more than ten times the runner-up – Canada with 1,323 bitcoin ATMs. To date, no other country has even surpassed 200 bitcoin ATMs.

Looking only at the number of bitcoin ATMs in any given city, the list of top 10 U.S. cities for bitcoin adoption consists exclusively of major metropolitan areas:

But the list of top cities becomes much more dynamic when you adjust for population and local economy. Though not necessarily the most accurate reflection of bitcoin adoption more broadly, the following lists do show some interesting trends and point to the potential for smaller cities to become bitcoin boom-towns in their own right:

Top American Cities by # of Bitcoin ATMs per 10,000 residents 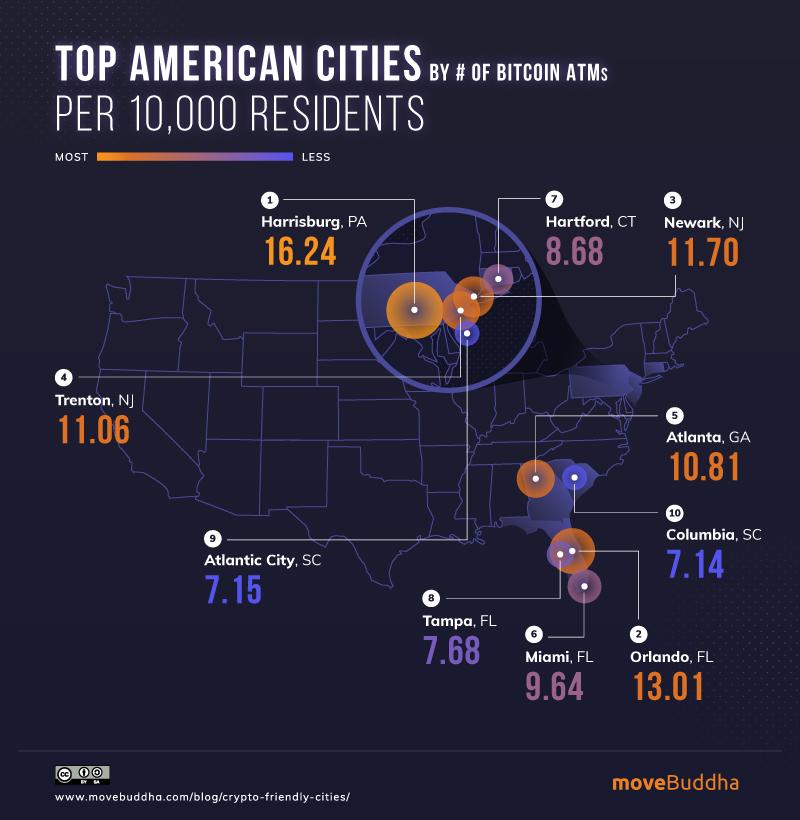 Though a few major cities such as Orlando, Newark, Atlanta, and Miami make both lists, these metropoles are all outranked on a per capita basis by humble Harrisburg, PA, with more than 16 bitcoin ATMs per 10,000 residents.

Despite its relatively small size, the Pennsylvanian capital is home to a thriving crypto community. Harrisburg hosts a blockchain and crypto meetup group that is 300 members strong, a number of cryptocurrency trading hubs and consulting firms, and Harrisburg University of Science and Technology even offers a Master’s degree in Next Generation Technologies with courses on cryptocurrency.

America’s next cryptocurrency hub may also emerge by comparing the prevalence of bitcoin ATMs to the region’s gross product:

Top American Cities by # of Bitcoin ATMs per $10 Billion GDP 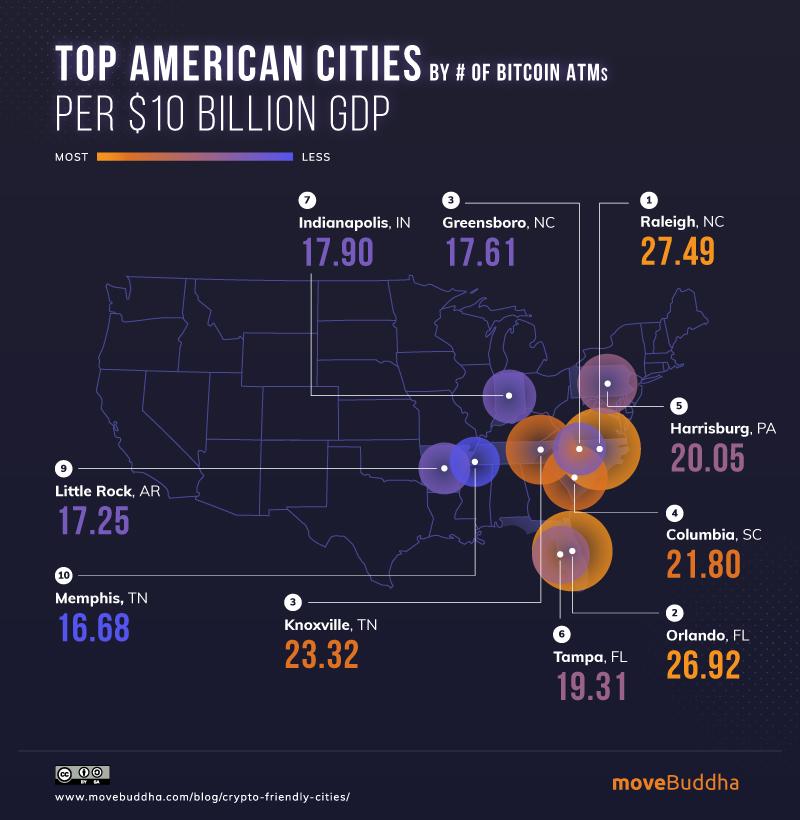 North Carolina’s capital city Raleigh and its neighbor to the west Greensboro both have a high number of bitcoin ATMs in relation to the regional GDPs, suggesting that bitcoin may play a proportionately larger role in the local economies than elsewhere in the country. Indeed, there does seem to be a high concentration of financial technologists in the area. At Duke University in nearby Durham, the Pratt School of Engineering recently launched a FinTech Master’s program and has now installed two blockchain nodes to teach students about how the platforms work.

Another surprising city on this list of up-and-coming bitcoin hubspots is Little Rock – the city with the smallest GDP of the bunch. Arkansas’s first-ever bitcoin ATM appeared in a corner store in downtown Little Rock in 2018, and the number has since grown to over 66 kiosks in the capital city alone. Why is Arkansas seemingly experiencing a boom in cryptocurrency accessibility? One reason may be the state’s cheap power. A low price per kilowatt hour makes Arkansas especially economical for the energy-intensive process of mining bitcoins.

The U.S. may have the rest of the world beat in terms of the number of bitcoin ATMs in operation, but bitcoin adoption is growing in many countries around the world. It will be a while before other countries catch up to the sheer number of ATMs stateside, but high concentrations of bitcoin ATMs per capita make the following countries promising contenders: 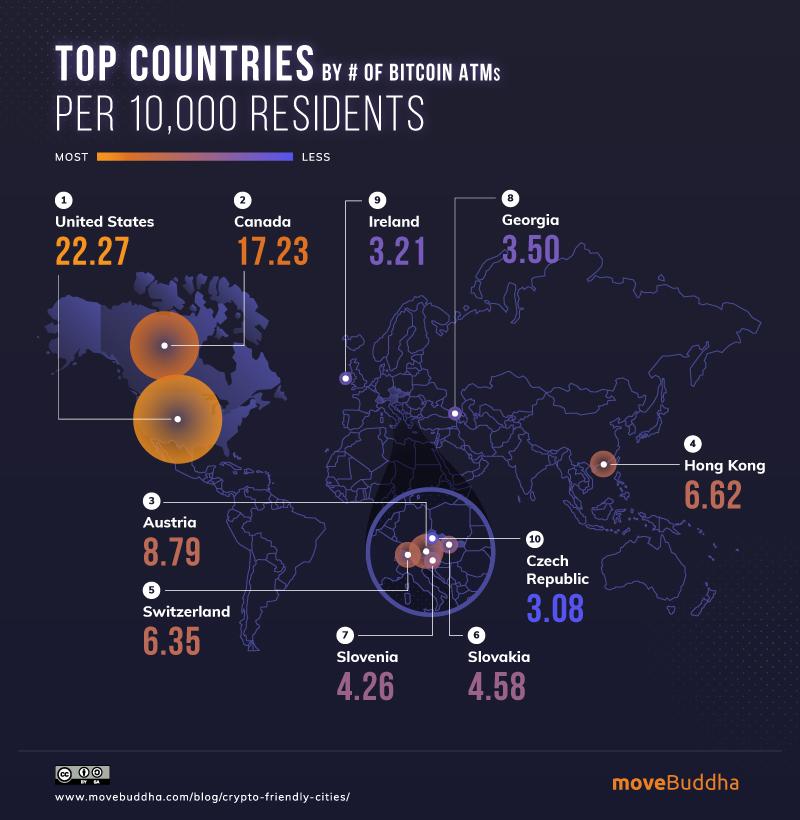 *only countries with at least 15 bitcoin ATMs were analyzed

Unsurprising on this list are Switzerland and Hong Kong, the banking capitals of Europe and Asia, each with more than six bitcoin ATMs per 10,000 residents. Switzerland is even home to Bitcoin Suisse, a financial service provider with over 200 employees all specializing in crypto-investment consulting. But for the thriving cryptocurrency market Hong Kong, the days may be numbered. A proposed law would ban retail investors from trading crypto and force all transactions to go through professional investors. 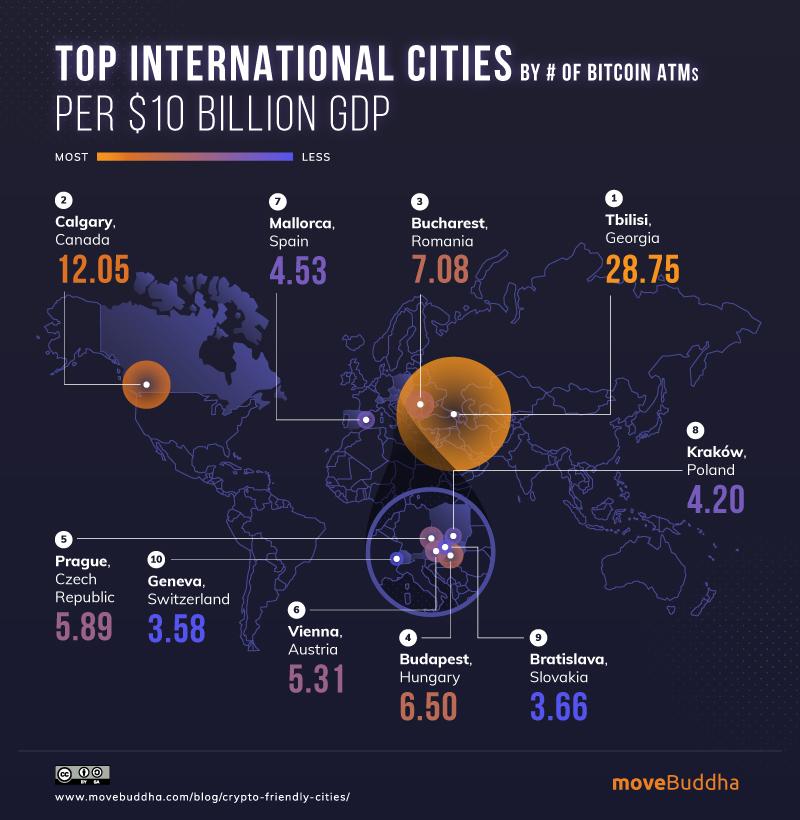 * only cities with at least 15 bitcoin ATMs were analyzed; only the top-rated city per country made the list.

Which city in the world has the highest concentration of bitcoin ATMs in relation to the local GDP, suggesting that cryptocurrencies play a significant role in the regional economy?

The Georgian capital of Tbilisi seems an unlikely contender for the top spot on this list of international cities pioneering bitcoin adoption. But the former Soviet republic of Georgia, with a population fewer than four million people, is now the second largest miner of cryptocurrency in the world. Inexpensive hydropower and a lack of federal regulation have turned the country into a “virtual printing press” for virtual money, giving the 23 bitcoin ATMs in Tbilisi an outsized presence in the Georgian economy.

Bitcoin also has a disproportionately large presence in Mallorca, even compared with Spain’s major metropoles like Barcelona and Madrid. The Mediterranean island region is a veritable playground for vacationing Europeans, making Mallorca an ideal location to offer an additional currency exchange option. Operators report that bitcoin ATMs placed in touristy areas perform exceedingly well, and hotels and restaurants that accept bitcoin payments receive tips that are 20% more generous than usual.

3. Where do Crypto Enthusiasts Actually Live?

Apart from Bitcoin ATMs, we also were curious to know what the top global cities were for bitcoin enthusiasts and if any overlap exists. Since this data is nearly impossible to come by, we took it upon ourselves to get the primary data.

Using advanced techniques, we scraped information from Twitter to identify the top cities listed in the profiles of Twitter crypto users. Profiles were included if they included the words “Bitcoin” or “crypto” variations.

This chart reveals that the top crypto-lover cities line up pretty well with the most populous cities in the world, but with exceptions. San Francisco is a fairly small city on the world stage, not even breaking a million in terms of population since the latest official counts.

Not shown in the data above was a huge amount of profiles listed “Cryptoverse” or “Global” or even “Moon” as their location. This suggests that a sizeable portion of the crypto world considers themselves digital nomads, not tied to one city.

This view includes those half-joke, half-serious locations, and hints at the future:

Metrics and methodology: how we ranked the world’s most crypto-friendly cities

Using information collected by Coin ATM Radar, we compared the locations of bitcoin ATMs against demographic (population [1] [2]) and economic (gross domestic/regional product [3]) data to develop a more nuanced understanding of the prevalence of these machines.

The presence of bitcoin ATMs alone can’t account for a complete picture of crypto-activity in every region of the world. In China, for instance, bitcoin transactions are forbidden and the country has 0 bitcoin ATMs. However, bitcoin mining is permitted, and China is the world’s largest producer of bitcoin – mining as much as 65% of new bitcoin globally. But bitcoin ATMs are a proxy for business- and consumer- interest in cryptocurrencies in any given region. As an easy-to-measure data point, a lot can be learned about the infrastructure and interest in cryptocurrencies in a particular city by looking at the number of bitcoin ATMs operating there.