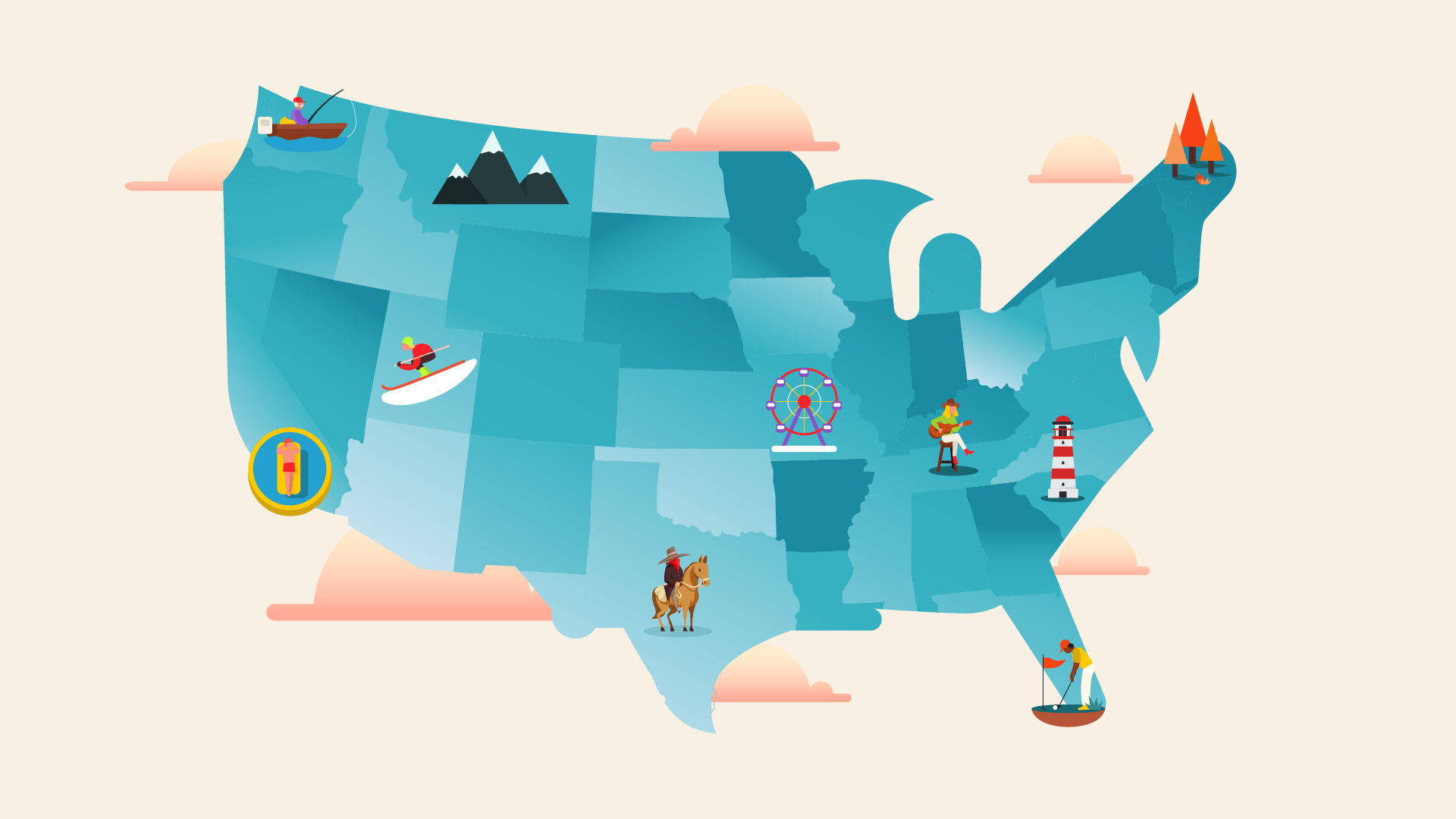 Small cities are a magnet for movers in 2021. From Zoom Towns to Gig Cities, affordable, spacious, and livable spots are seeing sustained growth.

Remote work has been trending for some time, but with pandemic restrictions, the world began to speed full-throttle towards a near-universal work-from-home lifestyle. With less need to commute to work, a recent Gallup poll revealed 48% of Americans are now interested in moving to a small town or rural area.

Remote work requires only a high-speed internet connection and a place to plug in. This new flexibility opens up the possibility to relocate to far-off, middle-of-nowhere communities (natural social-distancing?) or scenic, seaside spots for some fresh and cleansing air.

Whatever the reason for the move, people headed to smaller cities can help revive, diversify, and bring new life to less populous communities throughout the nation. Plus, smaller cities offer affordability and lifestyle opportunities that crowded metropoles simply cannot.

We’ve collected and indexed a list of the most sought-out small cities among those who relocated in 2020.

Our list ranges from neighborly towns with populations of 5,000 to more robust cities of 50,000, both suburban and rural. Some sit on the edge of sprawling cities, such as Katy, Texas, just west of Houston. Others are peaceful, beachside paradises (Myrtle Beach, South Carolina, and Naples, Florida). Remote workers may already be familiar with places like Burlington, Vermont, a long-time attraction for “the remotes.”  And with 23 small cities located in the Sunshine State, we don’t see the Florida-bound moving trend dying down anytime soon.

To see the full list of small cities most popular with movers, check out the full index below.

The Data: Where Movers are Looking to Relocate

Using proprietary data from our own moveBuddha Moving Cost Calculator, we could determine which small cities in the U.S. were most searched as moving destinations in 2020.

Our list is sorted by the most searched, so you can easily see which cities movers were interested in moving to in 2020.

We define small cities as those with a population ranging from 5,000 to 50,000. Some of these are small suburban areas, and others are rural towns.

Why might small cities be so attractive at the moment? Our list of growing small cities includes U.S. Census data points to contextualize the quality-of-life issues that are fueling their growth. It’s important to note that this information is a mix of data collected from 2010 to 2019.

There are many different reasons for Americans moving in 2020. A Pew Research survey found that as 2020 progressed, the reasoning shifted. In June 2020 a majority of 28% cited “Risk of COVID-19” as their most important reason for moving, whereas in November 33% of Americans stated “Financial Reasons” were their number one motivation.

Whatever your reason, these data points are here to serve as further insight into the popular small-town destinations for movers.

In 2018, the UN reported 55% of the world living in urban areas. Under normal circumstances, these dense cities are attractive for economic growth and job opportunities. Plus, they provide ample infrastructure for residents such as public transportation, socio-cultural activities, and healthcare services.

While population density and its relation to the spread of coronavirus is complicated, megacities in pandemic times can become vulnerable. Cases can spread more quickly due to crowded transportation services and shared living spaces. Surges in cases put U.S. medical systems under strain when the number of coronavirus patients outweighs the number of hospital beds.

It stands to reason that coronavirus and social distancing measures might have encouraged people to leave dense urban areas struggling with high coronavirus case counts.

Population density typically decreases as we move away from urban centers or areas with high-rise apartment buildings. NYC is a good example of this, with an overall density value of almost 28,000 people per square mile. When you look closer, Manhattan has the highest population density (71,000), while Brooklyn (36,000), Queens (21,000), and the Bronx (34,000) have lower densities. (New York City, Population Density)

We are still living through the pandemic, so research on the role population density plays in the spread of COVID-19 cases is limited.

One recent data study conducted in November 2020 from the American Institute of Physics indicates that in a global pandemic, movement from big cities to smaller towns indicates a better overall outcome for a reduced spread of disease (vs. shutting down borders).

Whereas others argue that there are not yet enough studies to support the conclusion that population density has an influence on the spread of viruses.

The average commute in the U.S. is 26 minutes for workers 16 years or older according to Census data collected from 2015-2019. This time to travel includes time spent waiting for public transportation, picking up passengers in carpools, and other activities related to getting to work.

33.3% of commuters in a 2020 OnePoll survey reported feeling “strongly” or “somewhat” anxious or agitated thanks to their commute. In a 2019 survey from Robert Half focused on 28 major U.S. cities, 50% of employees said traveling to and from work is stressful.

While many of those moving to smaller cities may work remotely, according to the U.S. Census Bureau the number of minutes it takes to travel to work can shed light on a city’s transportation infrastructure and provide researchers with tools to study how commute impacts population health and subjective well-being.

The Median Household Income is the combined gross income of all household members 15 and older. In 2019, the U.S. median household income was $68,703.

The median income is the middle point of the population’s household income, where half the people in the city earn more, and the other half earn less. Household income across the nation can vary dramatically. A one-person household will have a very different income profile than a household with four working-age individuals earning separate incomes. Often this number is used to measure how well people are living in an area and compare it with the poverty rate: the poverty threshold for a family of four in 2019 was $26,172.

Median household income can also help understand the cost-of-living in a particular community or city. For example, West Virginia has some of the lowest median household incomes in the country ($44,097) but a very low debt-to-income ratio. By comparison, pay rates are typically much higher in Washington, D.C., but so is the debt-to-income ratio. This typically is a reflection of the lower vs. higher cost-of-living in each respective area. Where a lower cost of living makes it possible to get by with lower wages in West Virginia, expensive cities like D.C. often have higher wages to match.

Percentage of 25+ with Higher Education:

Higher education data is collected by the U.S. Census to help understand generational changes in education and to evaluate the average education of the local workforce. Over time census data has indicated that individuals with degrees have higher lifetime earnings, lower unemployment, and better health outcomes.

About 36% of the U.S. population aged 25 and older have completed four or more years of college according to 2015-2019 American Community Survey 5-Year Estimates.

According to the USDA Economic Research Service, adults aged 25-64 with lower education have a higher unemployment rate in rural areas (2010 to 2015).

In a review in 2006 from the Institute of Education at the University of London, researchers suggested that higher education may positively influence mental and physical health behavior.
While higher education is certainly not a necessary path for everyone, cities with higher percentages of 4+ more years of university education may indicate a competitive local labor market and a healthier community.

We used proprietary data from our own moveBuddha Moving Cost Calculator and pod moving companies comparison tool. Comparing YoY data, we determined which small cities in the U.S. were most searched as moving destinations in 2020.