From bed frames and bookcases to table legs and washing machines, getting your items into a rental truck correctly isn’t a skill that many self-movers take to naturally.

In fact, it’s a bit like a life-size 3-dimensional jigsaw puzzle on steroids.

And unlike normal puzzles, the pieces can be pricy and fragile.

They vary greatly in size, shape, and weight too—and some of them have significant sentimental value.

With a little common sense and some professional help, getting your items packed properly for long-distance (or short distance) transport can be relatively easy.

What is the best way to pack a moving truck?

Before we get into the gritty details, here’s a quick summary.

Obviously, there’s a little bit more too it than that, so here are our best and most detailed tips for packing a moving truck.

Start by filling the “peak” of the truck.

Peaks are the overhangs that protrude from the front of the cargo area on top of the cab. Some trucks don’t have them, but most do.

They’re perfect for stowing fragile items, bulky furniture, and other difficult to load pieces like sofas, loveseats and flat-screen televisions.

Some first-timers rush to fill the peak with boxes and other easily loaded items, but it’s a classic rookie mistake that should be avoided.

Because you’ll need them later on, and getting rid of tricky items as soon as possible should be a priority.

There’s an old adage in the moving business…

Hold off on using them as long as you can.

That goes for other easy items like chairs, nightstands, and coffee tables and end tables too.

Reserve them for filling holes in the load later in the day when you’re mentally and physically exhausted.

Then, build a solid base.

When the peak is full, professional movers tend to agree that it’s a good idea to start loading large furniture and bulky items in the front of the truck.

This makes perfect sense for a number of reasons:

Many experienced movers make it a point to deal with upholstered furniture like sofas and loveseats first.

They’re among the trickiest items to load correctly, and though it’s counterintuitive, the best way to transport them is often in an upright position.

Here’s how to do it…

First, give them a good covering with plastic wrap (stretch wrap).

Next, cover them with moving pads and secure them in place with packing tape or loose-fitting bands.

Then, make a square cushion on the truck’s floor using a folded moving pad or two.

With a helper, raise one end of the sofa and gently lift the lower end onto the pad(s), making sure the legs are positioned against the truck’s wall.

If you have two similar sofas, put one on one side of the truck, the other on the opposite side, and fill in the empty space between them with a wide armoire, wardrobe boxes, bookshelves, or a desk.

If you’re moving appliances like dishwashers, washing machines, and refrigerators, you’ll want to avoid placing them next to upholstered furniture. Even if you’ve drained the water from them properly, there will likely still be some left inside. If it leaks out it could ruin your sofa… and your day.

Build tiers to make sure your boxes fill efficiently

Tiers are the individual rows of household goods stacked from the floor of the truck to its roof.

Standard tiers are between 18 and 24 inches deep, and making each one as flat and uniform as possible should be your goal.

This way, when one tier is finished you’ll have a nice flat surface against which to build the next one.

It probably goes without saying, but heavy pieces of furniture belong on the bottom.

Tiers made from oversize items like appliances and sofas are called wide tiers, and getting them out of the way first is wise.

They’re more difficult to put together than standard tiers, and the sooner you deal with them the more smoothly things will go at the end.

The base at the bottom, which should include dressers, chests of drawers and the like.

In the middle, use sturdy night tables, trunks, cartons of dishes, boxes of clothes and linens, and plastic storage bins.

You guessed it—fragile and lighter items like chairs, lamps, baskets, and sofa cushions.

If you find yourself with gaps between the truck’s wall and your tier, don’t fret—they’re perfect places to get rid of longer items like bed rails, rolled carpets, and garden tools.

Wrap them in moving blankets or paper padding for extra protection.

If exceptionally bulky items like hot tubs and playground equipment are part of your shipment, load them first and fill in the empty spots around them the best you can. If you put them off until the end, you may not have enough space.

Make sure you distribute weight properly

Especially if you’ll be making a long-distance trip in a vehicle from a truck rental company like U-Haul, you’ll want to make sure the load is distributed evenly.

Moving vans are notoriously top-heavy, so keeping the majority of the weight near the floor and spreading it evenly over the truck’s length is key.

This is particularly important if you’ll be driving in mountainous terrain, through inclement weather, or are just inexperienced in handling a large truck.

It’s also a good idea to avoid weight disparities from one side of the truck to the other, and to keep as much as possible between the front and rear axles.

Many moving vans have overhangs that extend well beyond the rear axle.

As the weight in the back of the truck increases, there’s a corresponding decrease in the front.

That means less weight on the steer axle, which can make turning, maneuvering, and changing lanes sloppy, unresponsive, and downright dangerous.

Lopsided trucks are more likely to make it onto someone’s YouTube driving fails video. Don’t be that guy (or gal).

How to Drive a Moving Truck

Secure your load so nothing falls or breaks

Everything is finally loaded.

Your helpers are thanked, paid, or at least well-fed.

It’s time to make the drive to your new home and begin the move-in and unpacking process.

You’ll need to secure your household items like a professional moving company would, or by the time you get to Denver they may be strewn all over the back of the truck like a tornado blew through.

Nearly all rental trucks have metal rails embedded in their walls which are used as tie-down points for heavy-duty load securement straps.

These straps have retractable clasps on each end that lock into place when inserted into the grooves.

In the center, you’ll find a simple cinch or ratchet mechanism, both of which eliminate slack and make strong bindings that should help hold your items in place.

If your last tier isn’t particularly even, you can use flat furniture items like dining table tops, headboards, mattresses and box springs as bulkheads to help keep everything from shifting during transit.

Don’t be shy about using straps.

Two is OK, but there’s no shame in using three or four.

If you are hiring professional movers, they will take full responsibility for loading the moving truck. We recommend hiring movers as they will know exactly what to pack first, and how to load the truck safely and efficiently.

What should I do with my mattress?

Make sure you cover your mattress with a mattress cover or a mattress bag. If it is a very heavy mattress, pack it towards the beginning by sliding it along one of the sides and locking it in with other heavy boxes or large items. Think of it as a game of Tetris. Find a space that makes sense.

What should I pack first?

Start by filling the peak of the truck, the overhangs that protrude from the front of the cargo area, with fragile items and boxes that fill well into that area.

What should I bring with me, instead of packing in the truck?

Whether you’re doing a DIY move or hiring movers, make sure that you pack a separate bag that has a change of clothes as well as your important documents that you don’t want to have to dig out of the truck. 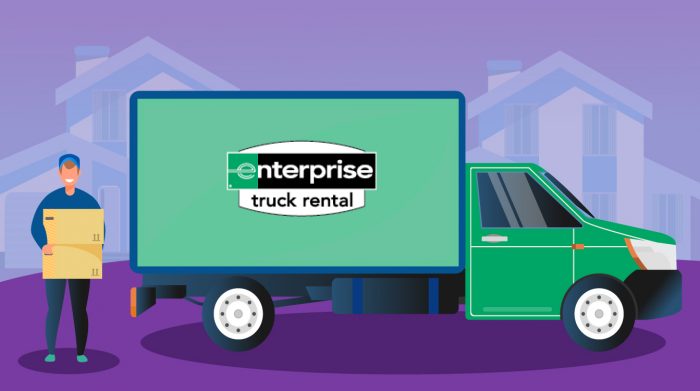 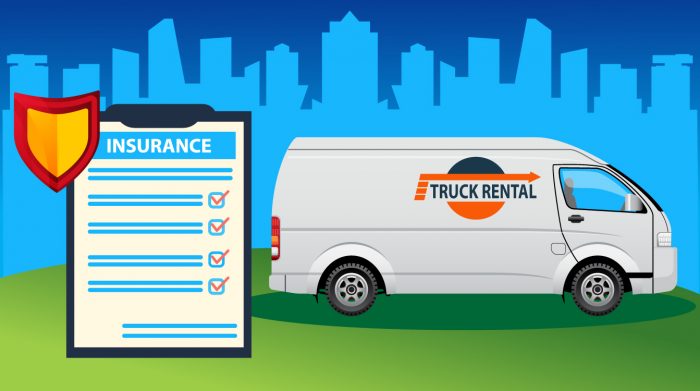 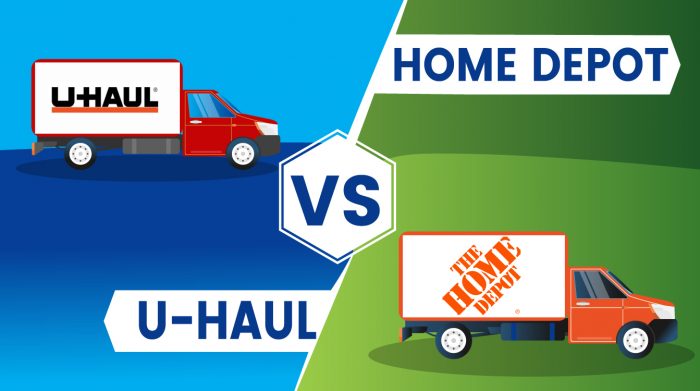 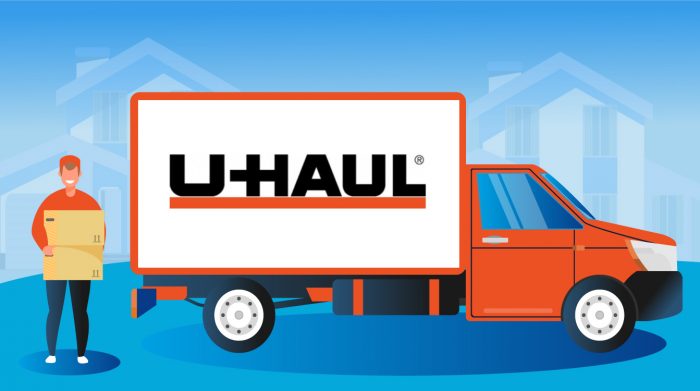 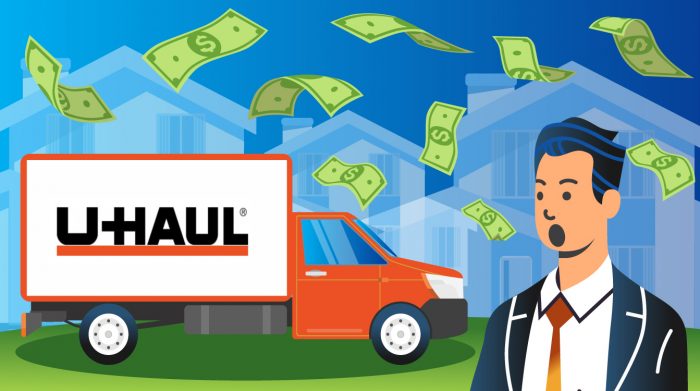 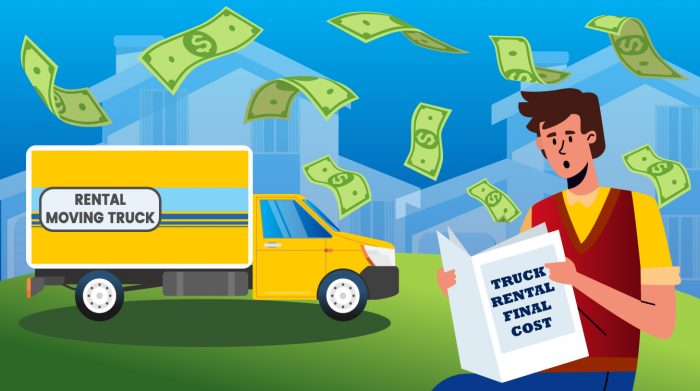 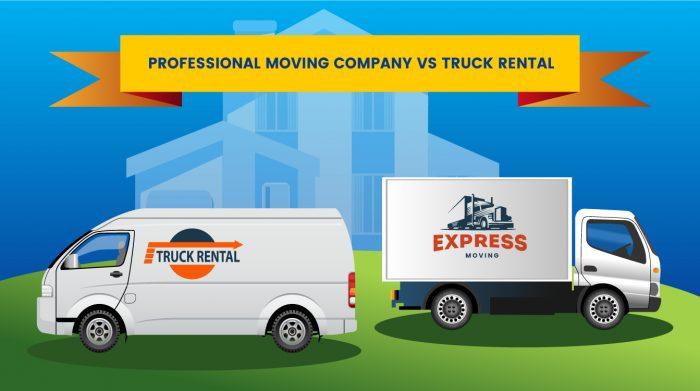 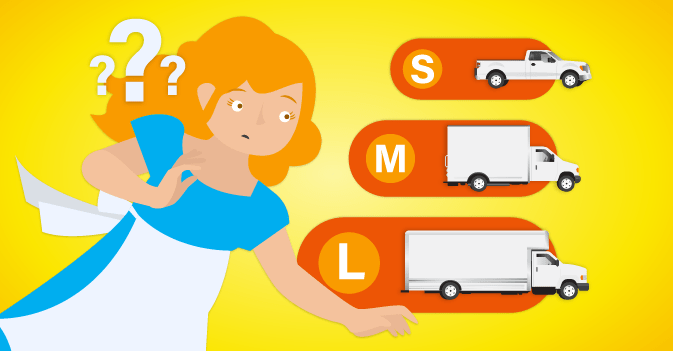 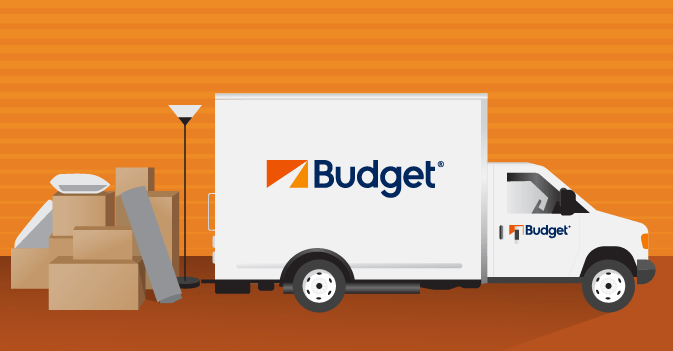 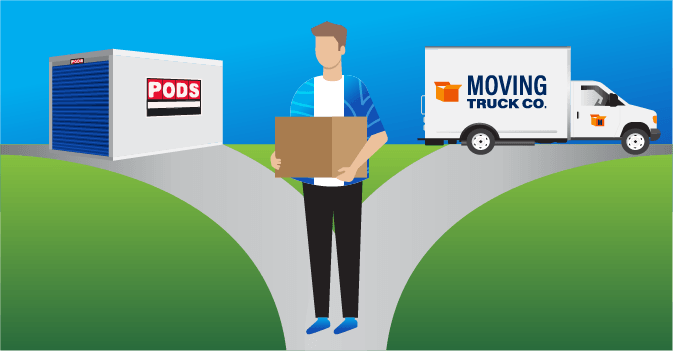 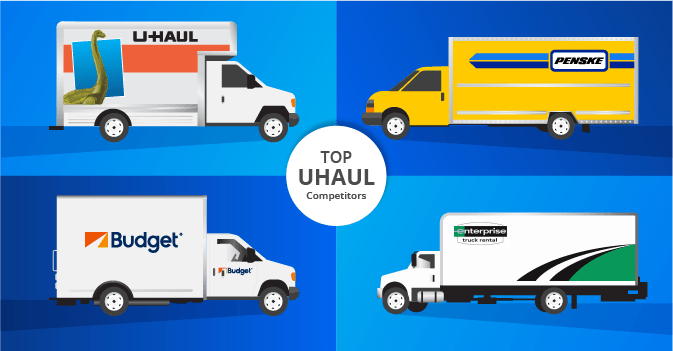 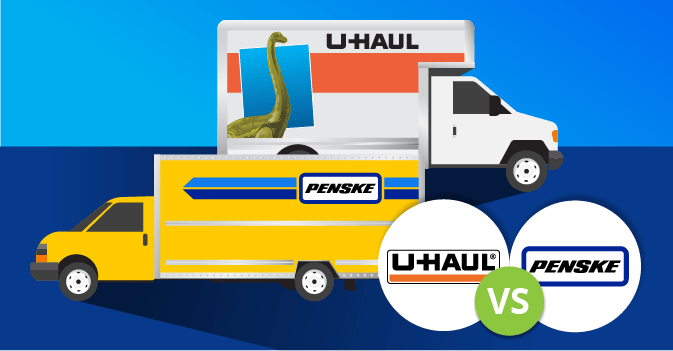