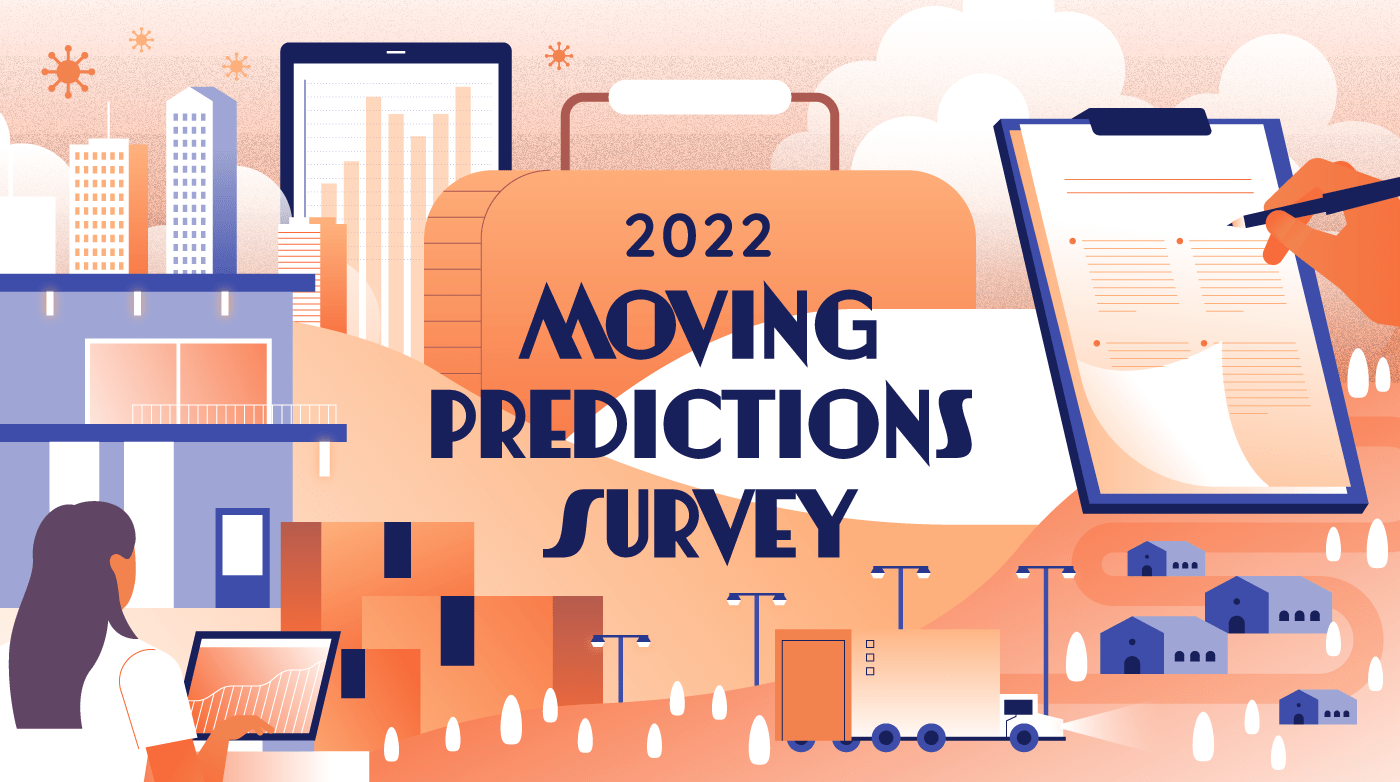 19% of respondents are either planning on or considering relocating to a new state this year. Which states are people fleeing, and what is driving these moves?

After the global upheaval of 2020, our 2021 Migration Report shed light on how American moving trends are beginning to adapt to some semblance of a new normal. What does 2022 have in store for domestic migration patterns?

In January 2022, we ran three surveys, each with over 1,500 respondents spread across all 50 states, to better understand if and why Americans are planning a move in 2022.

Migration since the pandemic

In July 2021, we polled over 1,011 US residents to determine how many Americans had moved homes since the start of the pandemic, and whether or not COVID-19 had influenced this decision.

We ran this same poll a few months later in January 2022  (this time reaching more than 1,500 respondents) to see if anything had changed in the months since. 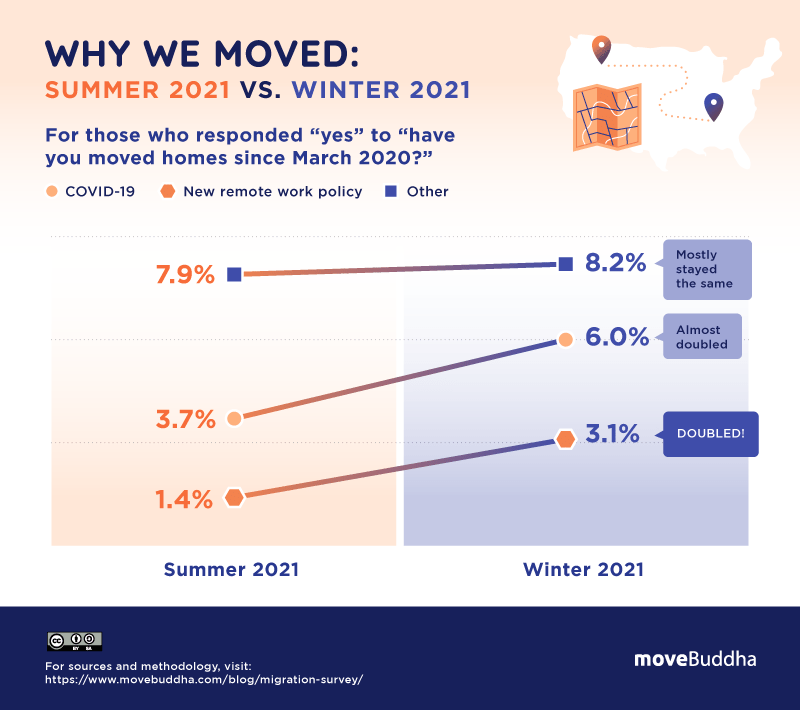 Over the course of five months, the number of people who reported having moved since the beginning of the pandemic rose from 13% to 17%.

What’s more, where only 1.4% of July respondents cited remote working arrangements as an influencing factor, 3.1% of January respondents reported that the ability to work from home was a motivation for the move – a more than 120% increase.

Similarly, COVID-related concerns and regulations was a driving motivation to relocate for 3.7% of July respondents. In January, however, as many as 6% of respondents cited these factors as decisive in their recent move – a 62% increase in six months.

Given the notable rise in moves between July 2021 and January 2022, we wanted to see if an increase in interstate moves can be expected for 2022.

Our January 2022 survey of nearly 1,400 US residents showed that nearly 1 in 10 people are planning to move across state lines this year. What’s more, another 9% are considering such a move. 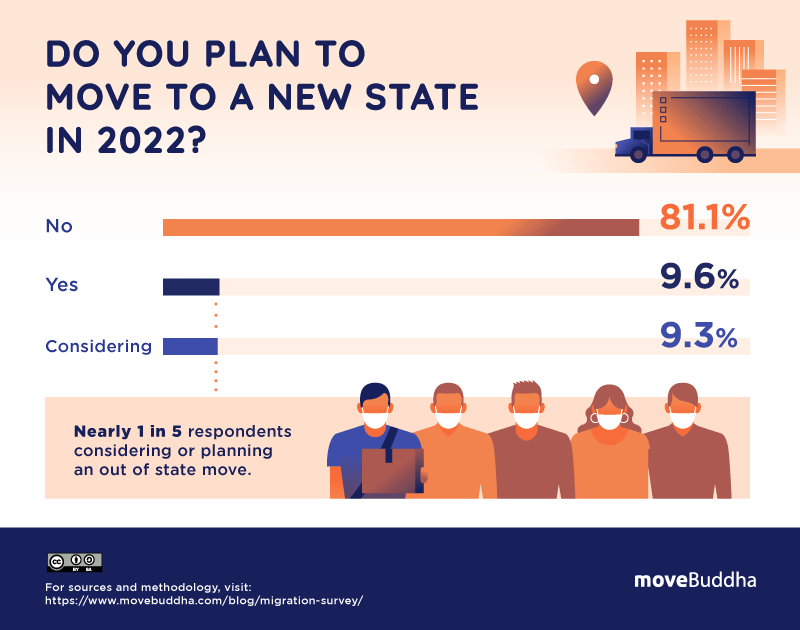 With nearly 1 in 5 people either planning or considering a long-distance as we head into the third year of a pandemic, we wanted to better understand the motivations for picking up and changing states.

Are people moving for the same reasons they always have, or has life in a pandemic led people to reconsider their priorities? 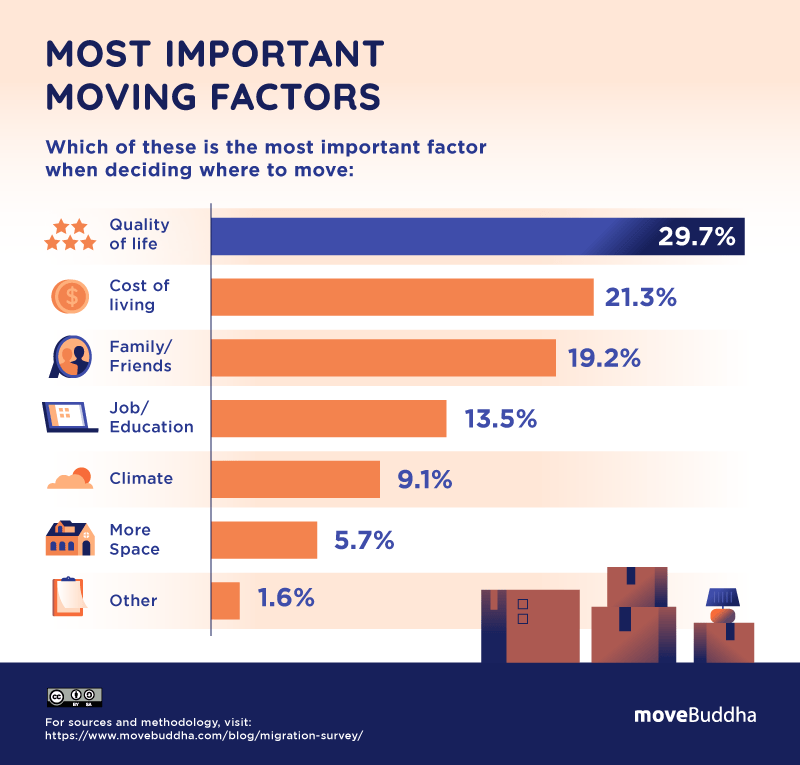 Our survey of nearly 1,000 US residents showed that “Quality of Life” was the most important factor that people consider when choosing a new home, with nearly 30% of respondents choosing this option.

That Americans are increasingly prioritizing quality of life in 2022 makes sense both in terms of the unique moment we are living through as well as established trends that precede COVID-19. The United States has seen a sustained decline in markers of quality of life over the last decade, an outlier in terms of developed countries.

The second most important factor for a moving destination was “Cost of Living,” selected by 23.7% of respondents.

These results represent a dramatic departure from earlier surveys about the motivations for moving. For instance, a Census Bureau survey of Americans who moved between March 1999 and March 2000 found that only 5.5% of people who relocated that year did so to find less expensive housing.

Another major departure between the 2022 survey results and Census data from 2000 is a marked increase in people moving to a place due to its more preferable climate.

While only 0.7% of people who moved between March 1999 and March 2000 cited a change of climate as their primary motivation, 22 years later, 8.8% of respondents reported that the climate was the most important factor they would consider when deciding where to move.

Not looking to upgrade

While it may be tempting to assume that two years of social distancing and increased confinement at home would make people eager to live in a larger, better home, our survey suggests this isn’t what the majority of movers are prioritizing at the moment.

Only 5.7% of respondents in 2022 reported having more space as the most important factor to consider when moving. This is a dramatic decrease from two decades ago, as 18.5% of movers in 1999 and 2000 reported that a new or better home was the primary reason for their relocation.

As our survey found that nearly 1 in 5 Americans were either planning or considering an interstate move in 2022, we were curious whether residents in specific states or regions were more or less likely to stay put. 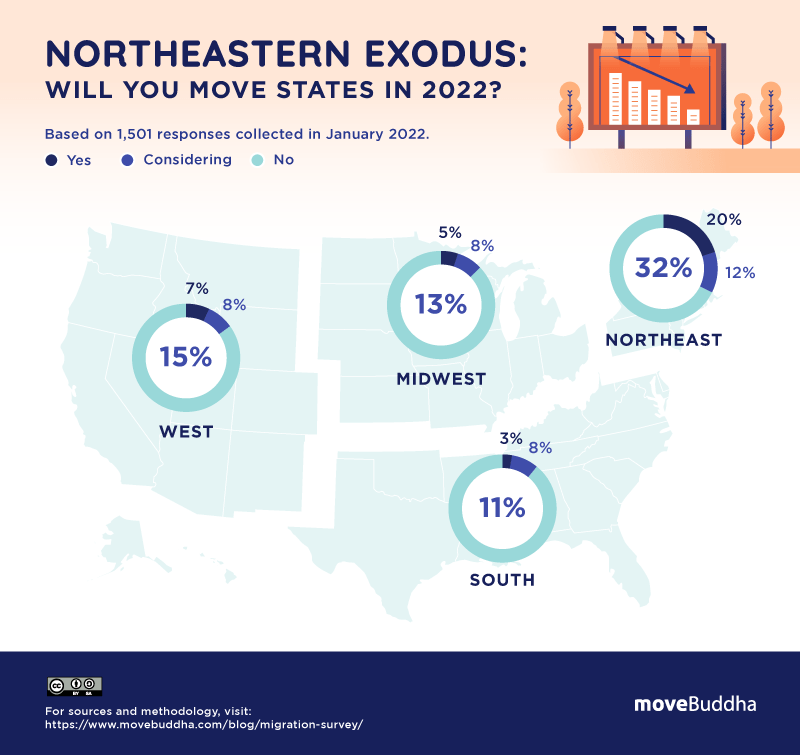 Staying in the South, escaping the East

1 in 3 respondents from Northeastern states reported that they were either planning or considering an out-of-state move in 2022. As much as 20% responded that such a move was planned, and an additional 12% were considering it.

On the other hand, respondents residing in Southern states were the least likely group to move in 2022. Only 3% of residents reported having an out-of-state move planned for 2022, and only 8% were considering one.

It is worth noting that, on the whole, Northeastern states are geographically much smaller than states in other regions – so the likelihood that a move of 100 miles will cross state lines is significantly higher. However, this trend does seem to reinforce discussion of a mass exodus from coastal cities into “the New Heartland.”

Of survey respondents residing in New Jersey, a startling 42% said they were already planning to leave the state in 2022, while another 18% said they were considering it. With only 39% of New Jersey-based respondents set to stay put this year, the Garden State was by far the most likely to lose to residents in 2022. 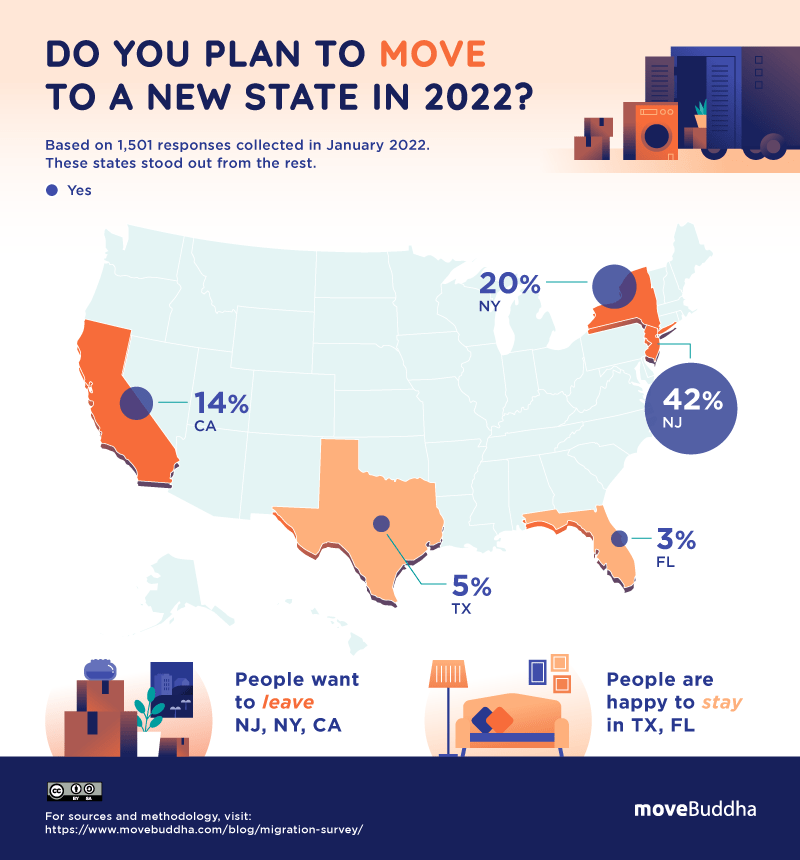 After New Jersey, New York state ranks as the second state which current residents are most likely to depart in 2022: 20% of NY-based respondents said they were leaving the state, and another 8% were considering it.

California is another state whose residents seem eager to leave: 21% of California-based survey respondents said they were planning or considering an out-of-state move in 2022.

These results align with our recent analyses of the ratio between inbound and outbound moves to and from each state.

States to stay put in

On the other hand, survey respondents based in Texas and Florida showed less propensity to move in 2022 compared to the survey average.