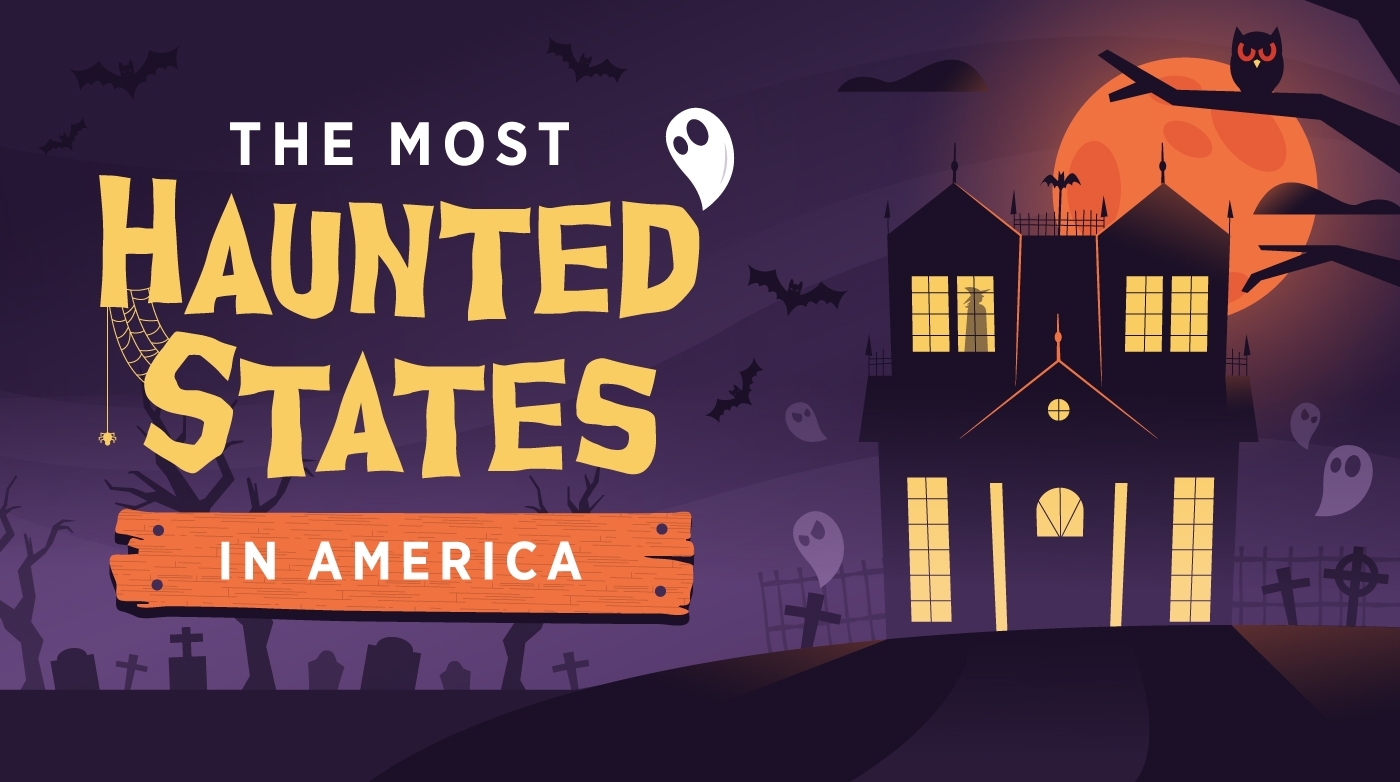 American dream? Let’s talk about American nightmares. This expansive and storied country is brimming with ghost stories and other tales of unexplainable happenings that date back centuries and persist to modern-day. In which states are horror aficionados most likely to get their fix of the heebie-jeebies?

With Halloween right around the corner, we wanted to find out which state is the most haunted. We uncover the hotspots across the nation with the highest potential for spooky and spine-chilling encounters. Here’s how we scored each state: 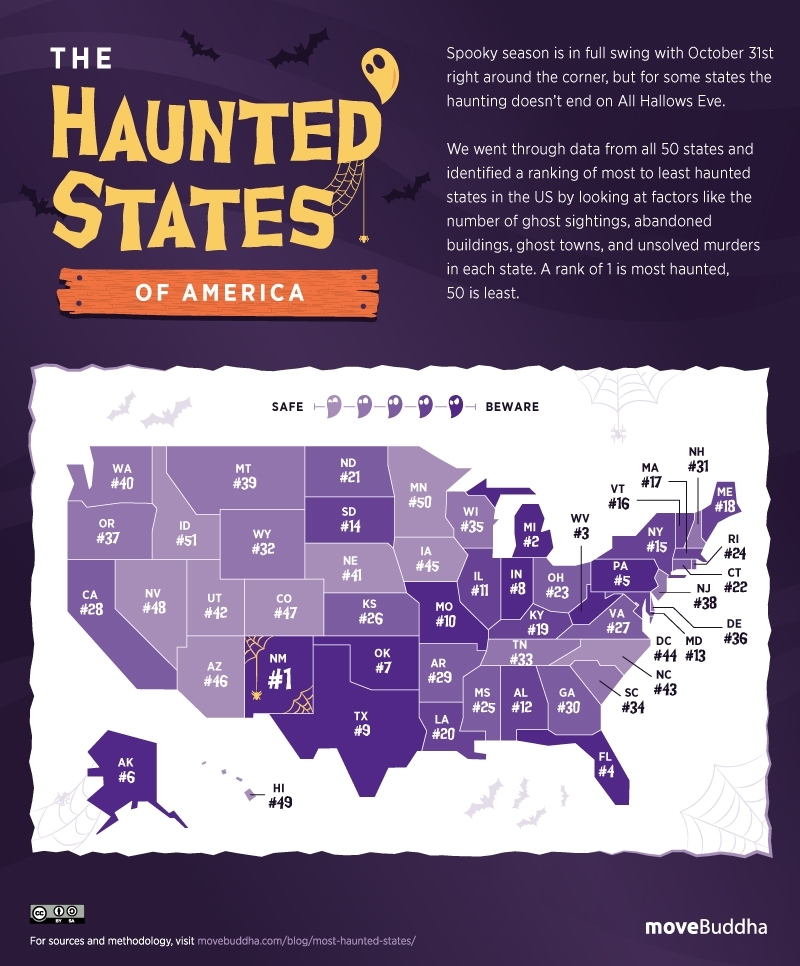 *Read more about our sources and methodology here.

• New Mexico is the spookiest state in the nation. Home to places such as the Acoma Pueblo, which is considered to be the oldest continuously inhabited region in the entire Western Hemisphere, this southwestern state is the ideal location to commune with spirits of the distant past.

• Did you just feel that? New York has the highest Creep Score of any other state, with a very high rate of unsolved murders and more notable abandoned places than anywhere else in the nation. Perhaps this is one small factor for why people are leaving New York in record numbers?

• Lovers of spooky cemeteries should head to West Virginia. This smaller state with less than 2 million residents is home to over 18,534 graveyards, the oldest of which dates back to 1734.

• Terror tourists will be thrilled to find over 290 ghost towns and almost 1,900 documented ghost sightings in the state of Oklahoma.

The Top 10 Most Haunted States of America

Whether it is ancient cemeteries, abandoned factories, or brushes with the supernatural that really give you the creeps, you’re sure to find a rush of adrenaline in one of these super spooky states. 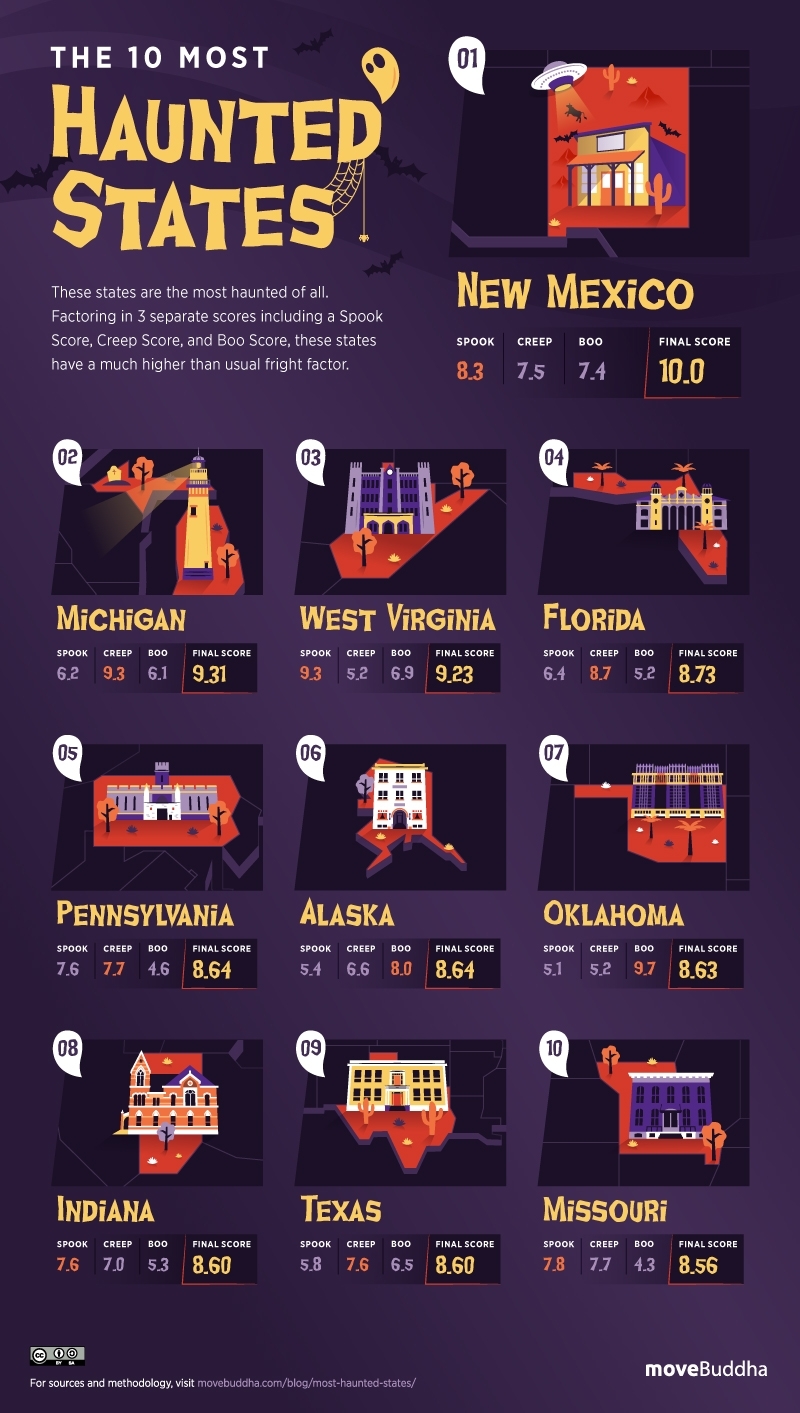 Old-timey New England may be the most haunted region in the American imagination, thanks in no small part to famous legends such as Sleepy Hollow and the horror writings of authors like Edgar Allen Poe. But in terms of ancient history, rugged southwestern New Mexico has New England beat.

The most haunted state in America, New Mexico has been home to human beings since 9200 BCE. Between abandoned adobe cities made by Ancestral Puebloans to the time of the colonial Wild West, New Mexico has plenty of fodder for spooky stories.

Tip of Terror: The Acoma Pueblo, 70 miles west of Albuquerque, may be the oldest continuously occupied site in the Western Hemisphere. Acoma Indians lived in a village atop this sprawling mesa as early as 600 CE, and Spanish missionaries arrived at the end of the 16th century. With thousands of years of history, including a brutal massacre of 800 Acoma Indians, the 2000 sq ft graveyard located literally in the shadow of the mesa is among the most uniquely spooky places in the United States.

West Virginia may be known among outsiders for its coal mining industry, but to local horror enthusiasts, this Appalachian state is home to an exceptionally high rate of cemeteries. This small state with fewer than 2 million residents has over 18,534 cemeteries, and each is seemingly the scene of a spooky tale. The Hatfield Cemetery in Logan County, for instance, is where many members of the Hatfield family (famous for their feud with the McCoy’s) are buried.

Tip of Terror: One of America’s most monstrous creatures has roots in West Virginia. The glaring red eyes of the Mothman were first spotted in 1967 near the abandoned WWII bunkers in Point Pleasant. Since then, the Mothman has evolved into the town’s most feared and beloved urban legend. Point Pleasant is now home to a 12-foot steel statue and an entire museum dedicated to this humanoid creature.

If it is ghost towns that get your adrenaline pumping, then look no further than the plains of Oklahoma. With fewer than 4 million residents, the Sooner State has 290 ghost towns to explore, and plenty of ghost stories to match. Many of these abandoned communities were oil boom or lumber mill towns that met their demise during the Great Depression. Tornadoes flattened others.

Tip of Terror: Located in between Stillwater and Yale, the town of Ingalls, Oklahoma looks like something out of a classic western movie. This ghost town, now home to just 150 people, was once a growing and thriving oil and coal mining town. But to the detriment of the town’s promising future, it was also a hide-away used by outlaws, including the infamous Doolin-Dalton Gang in the early 1980s. When the U.S. Marshals learned that many members of the gang were convening at a local saloon, they sent 27 deputies and the Indian police to Ingalls. The ensuing gunfight resulted in the death of three deputies and two local bystanders and is memorialized on a plaque near the boarded-up Old West town’s center.

Top 10 States That Will Give You the Creeps the Most

Not all fodder for ghost stories is ancient history. Many of the creepiest places in America are those where persistent housing and income inequality have been met with sharp economic downturns, leaving ruins and urban legends in their wake.

We developed a Creep Score for every state according to its rate of unsolved murders and noteworthy abandoned places noted by Atlas Obscura. Here are ten states where you can catch a ghostly glimpse of the broken dreams and crumbling buildings of America’s more recent past.

New York, especially its western and upstate regions, is home to more notable abandoned buildings than any other state in America. The perfect scene for urban legends is the abandoned Wonder Bread Factory of Buffalo, which shuttered in 2004. Though the Wonder Bread brand has long been associated with images of homegrown American wholesomeness, the demise of this factory isn’t a particularly comforting one: the food processing facility was forced to close due to asbestos, eliminating 150 jobs.

Often described as a playground for America’s rich and famous, more people have seen their dreams crumble in California than come true. Many sites, such as L.A.’s Cecil Hotel, in which at least 80 people have died (some under very mysterious circumstances) since it opened in 1924, are still in operation today. Another example, an abandoned waterpark in the middle of the Mojave desert, seems a perfect metaphor for the ghosts of American hubris: Lake Dolores.

Illinois, Michigan, Maryland, and Washington D.C. also appear among our top 10 creepiest states in America. Chicago, Detroit, Baltimore, and D.C. are cities with some of the highest rates of violent crime in the country, a statistic that is intimately tied to persistent poverty and a history of housing discrimination. In these states, urban explorers and adrenaline junkies will find plenty of abandoned buildings where they can commune with the ghosts of American industry.

Terrified that you live in one of the most haunted states in the U.S.? Use the moving cost tool to find the best way to pack your bags and head for a ghost-free state!

To find the spookiest states in the USA, we assigned each state with a relative score of 0-10 according to factors in three categories:

All state population data is based on the most recent estimations from the census.