If you love the idea of living in a capital city with a small-town feel, want to be close to Seattle, and be in the same environment that inspired some extremely influential bands, you should consider moving to Olympia. 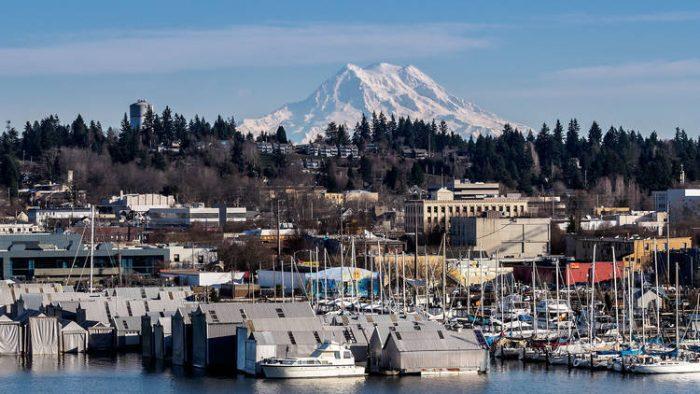 Olympia is one of the smallest capital cities in the country, but it’s quickly growing in popularity due to its pleasant atmosphere, proximity to Seattle, and low cost of living.

Despite its size, Olympia is still a bustling capital city with a lot going on. To the outsider, it can be an intimidating place to move.

Luckily, we created this guide to walk you through the ins and outs of moving to Olympia, Washington.

And if you’re looking for more info on moving to Olympia, check out our Olympia move cost guide.

Now, before we get into the details of moving to Olympia, check out this video to familiarize yourself with the city’s beautiful landscapes

For such a prominent city, Olympia isn’t nearly as subdivided as many would expect. 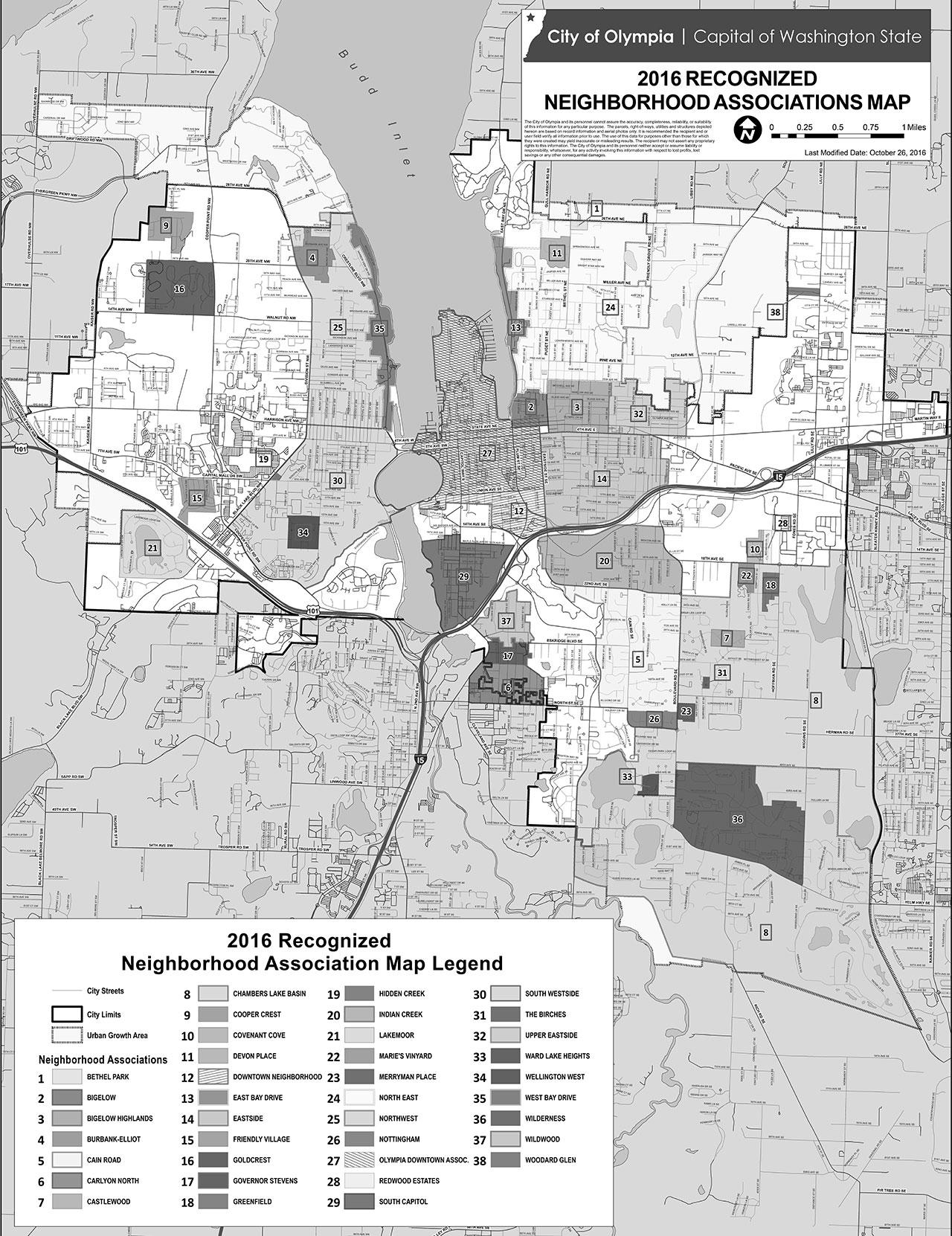 The city can be most easily divided into four quadrants: East Side, South Capitol, Johnson Pointe, and West Olympia.

East Side and West Olympia border Downtown to the east and west, respectively, and are popular among people looking to settle down in quieter neighborhoods that still have easy access to the action.

South Capitol is the trendier side of town that resides south (duh) of Downtown. Johnson Pointe contains some of the pricier areas north of Downtown near Puget Sound.

As you can see from the image above, the city’s rent prices are pretty consistent throughout.

Still, there are slight variations

Still, no matter where you live, you’ll probably want to feel like you belong in the community.

Take a quick look at this alternative map to get an idea of what the areas you’re looking at might be like: 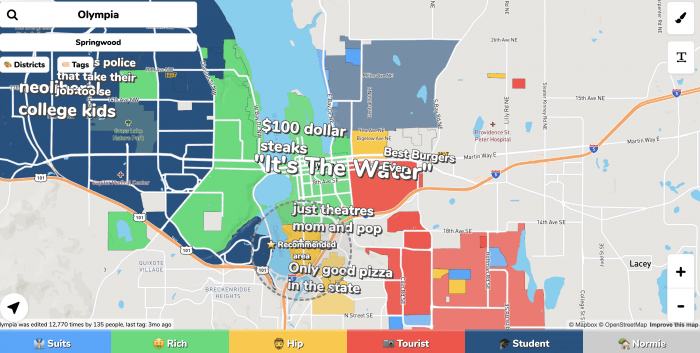 We all want to live near people that we fit in with and Esri’s Zip Tapestry tool helps you find exactly where those areas are. 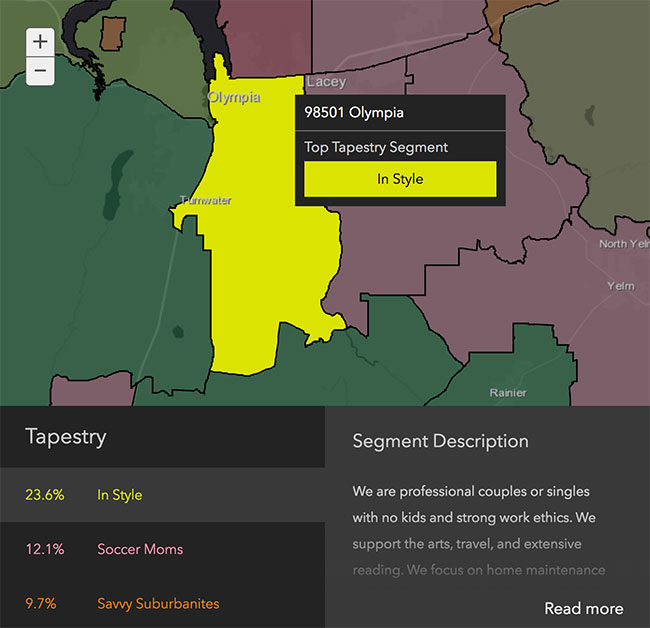 For example, if you were to plug in the zip code for South Capitol (98501), you’ll get a full breakdown of the area’s three largest demographic subsections. It’s extremely helpful!

Now that you like your neighbors, let’s make sure you can get to work on time.

It’s not that the city doesn’t have other transportation options, but they’re pretty limited and driving is going to be significantly more convenient.

But hey, at least commute times are short, so that kinda makes up for the lack of public transit.

In fact, more people are concerned about commuting outside of Olympia than commuting within it.

Many people choose to live in the fairly inexpensive Olympia while working in larger cities such as Seattle or Tacoma. However, some have realized the monstrous commute isn’t worth the hassle once the time and cost of gas are factored in.

So, what’s someone living in Olympia to do if they don’t want to own a car? Well…

A walk score of 38 is far from abysmal, but it still isn’t very good.

Even though the city is fairly small, it isn’t laid out particularly well to accommodate walking as a primary means of transportation.

That isn’t to say it can’t be done. Downtown, South Capitol, and East Side are all fairly walkable, but the futher you get from these areas, the less walkable things get.

IntercityTransit provides the bulk of Olympia’s public transportation and it does a job that’s serviceable, at best which is echoed by the city’s transit score of 35. 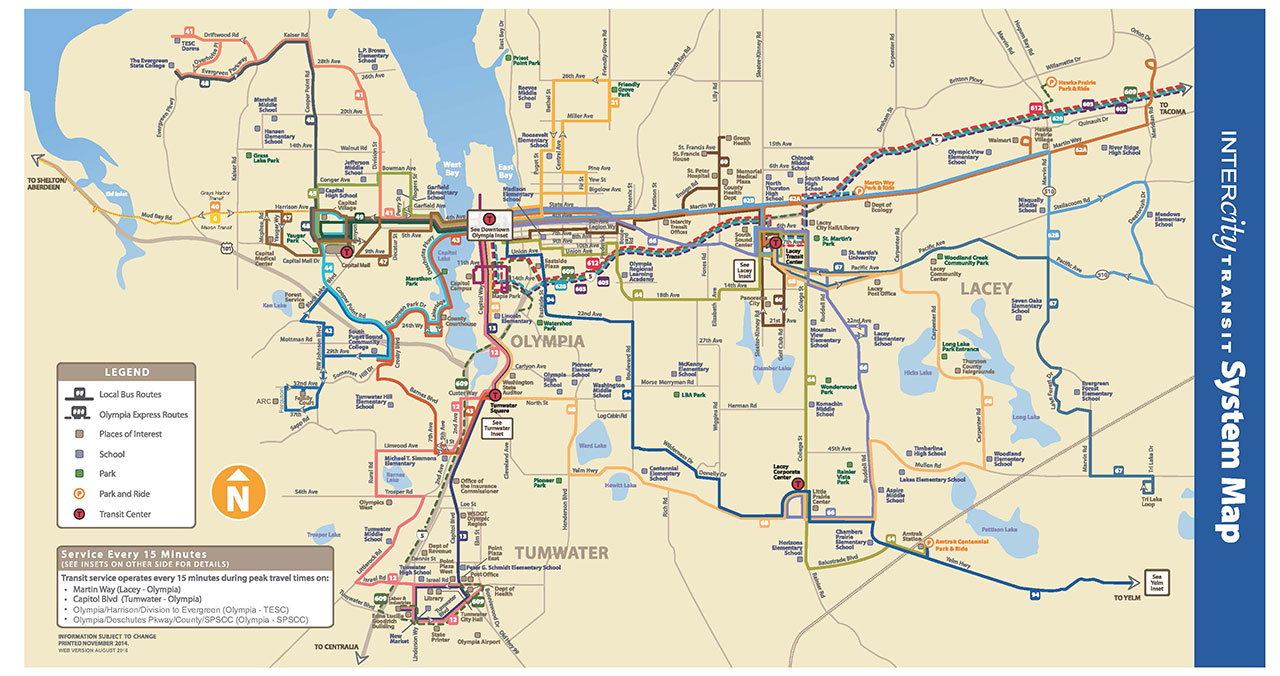 As you can see from the Olympia Bus System Map above, there is a solid route that covers the central area of the city, but it doesn’t extend far into the corners.

The bus system does have daily routes to and from Seattle which are nice to have but will also eat up huge chunks of your day.

Olympia’s bike system doesn’t have a ton of reach, but it’s perfectly serviceable in individual areas.

Basically, if you’re living in a central area, you could probably get around fine on two wheels. 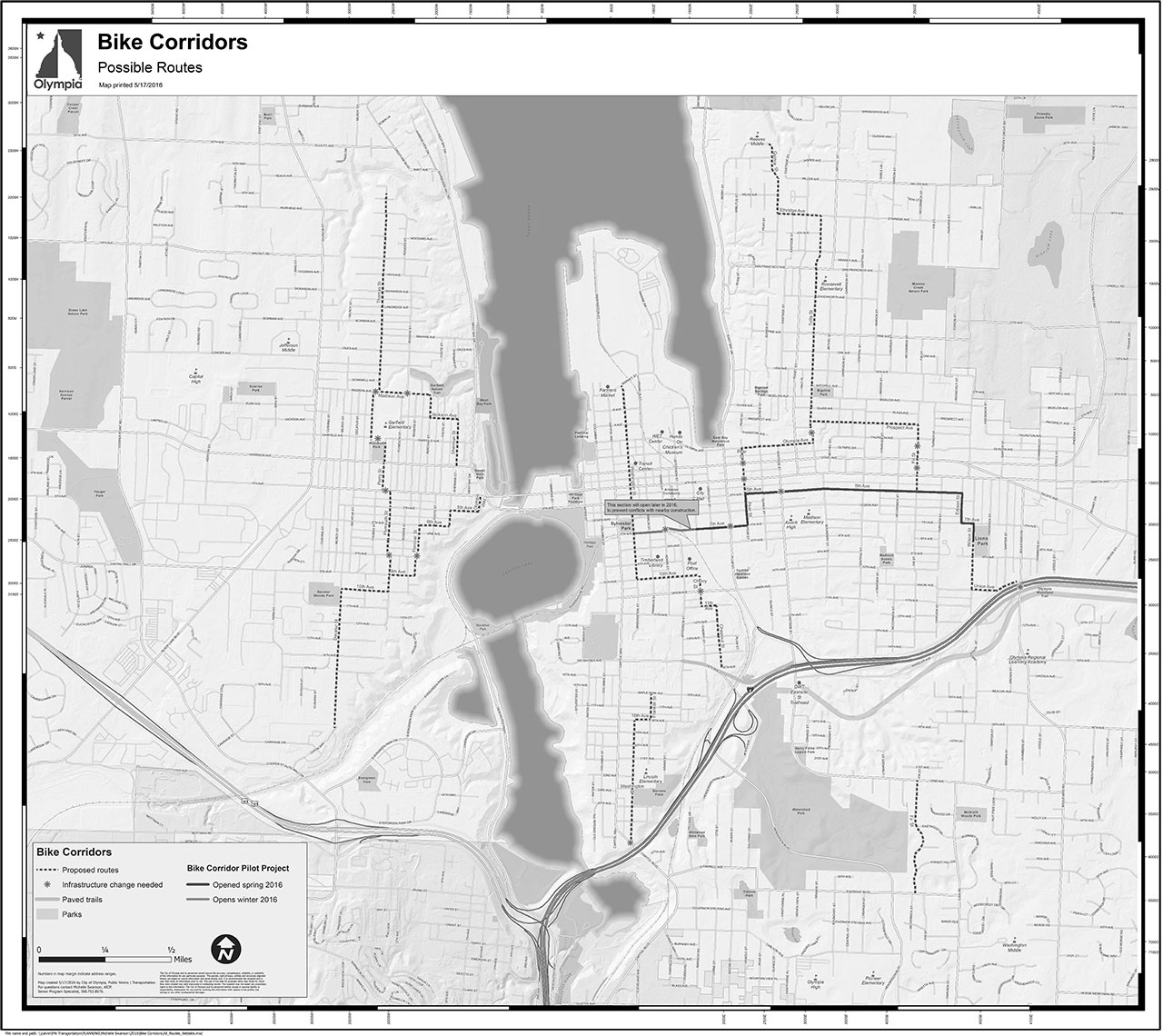 Biking as a primary means fo transportation is only really an issue if you’re coming from outside of the city’s center.

The city of Olympia seems to be aware of how lacking the current offerings for cyclists are. They are working on a bike corridor system to better connect some parts of the city.

Of course, no matter where you live or how you travel you’ll probably want to know about the area’s crime statistics.

Crime is nearly inescapable no matter where you live, so it’s best to approach crime rates and statistics with a certain amount of context and perspective. 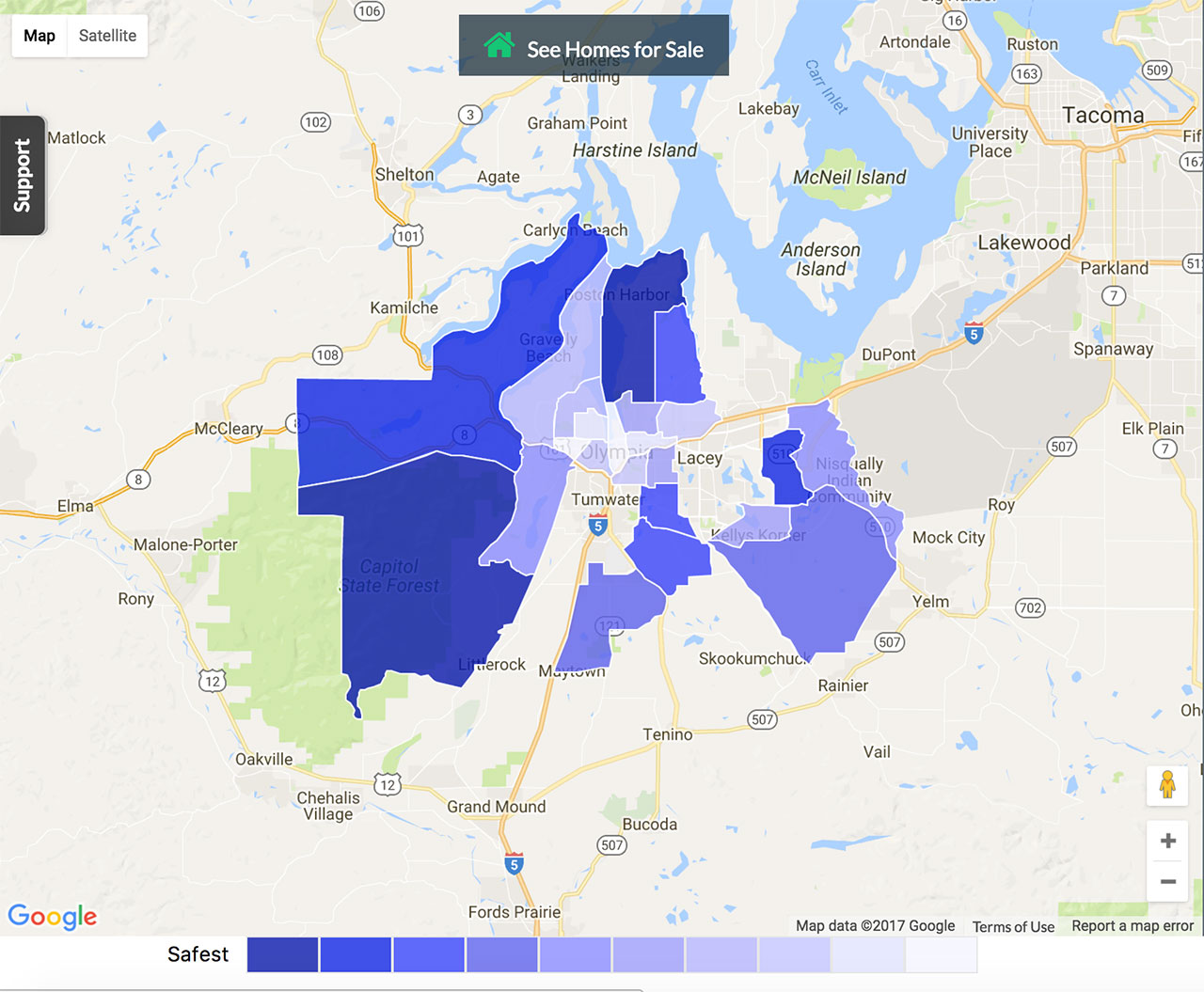 That being said, according to NeighborhoodScout Olympia’s crime score is a measly 5 out of 100.

BUT being aware of trouble areas is the first step in avoiding an incident.

People’s biggest mistake when looking at crime stats is equating crime with violence, which is very misleading.

In Olympia, violent crime only accounts for 7% of all reported incidents. And while there’s still a lot of property crime the situation is neither dire nor dangerous.

No matter how bad crime is in your area, as long as you stay aware of your surroundings and avoid putting yourself in dicey situations, you’ll be fine in Olympia.

Alright, now that the basics are out of the way, let’s look at actually finding a place to live.

Your first concern should be the accommodations you’ll need

Seeing as Olympia is located squarely in the Pacific Northwest, you’ll want to account for some seasonal weather variations. 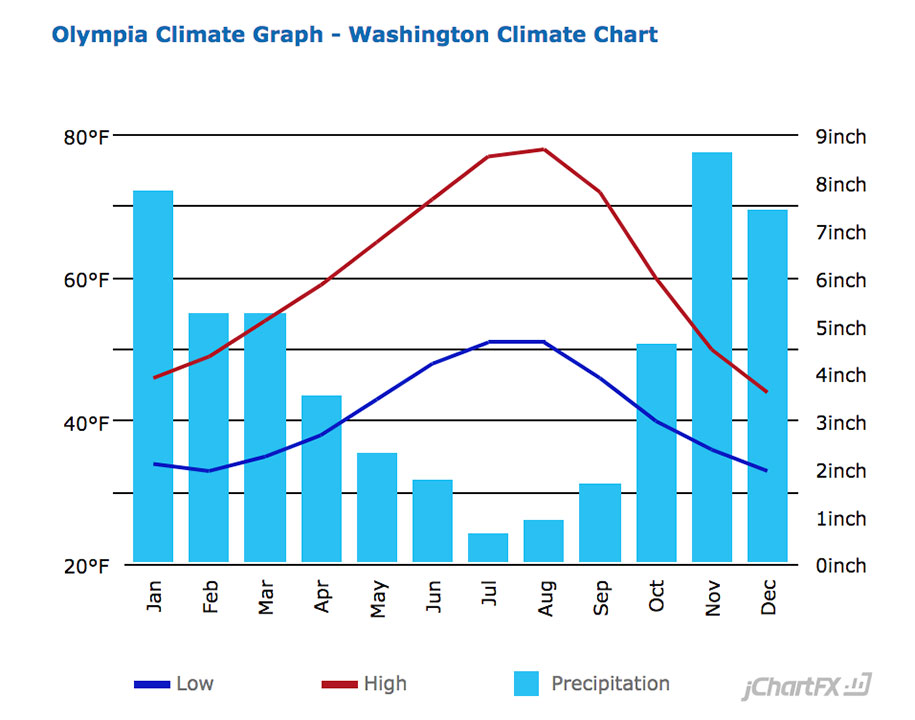 The summers here are going to be fairly mild, but winter can get downright chilly. Because of this, you’ll probably want a place that has heating and air conditioning.

You’ll want to think about your budget when looking for apartments too, considering utilities like the cost of internet per month.

And, due to the city’s poor walkability, an apartment with a washer/dryer is going to be preferable to searching for laundromats.

Resources for finding Apartments in Olympia

Looking for a new place can be extremely stressful.

Because of this, we’re compiling all the best resources available to make sure you find the best possible deal.

While it isn’t the most conventional method, Craigslist can be a solid resource for finding affordably priced rentals that don’t get listed on bigger sites.

The rental market in Olympia is getting expensive.

Between the end of 2017 and the beginning of 2018, the average rent for an apartment in Olympia has increased by 4.37%. While that may not make a huge difference, it’s still substantially more than the decrease of 0.4% in the national average.

And a recent study conducted by the Department of Numbers has the Olympia vacancy rate listed at 3.53%, as of 2018. That’s not fantastic, and it’s very far behind the national average of 5.85%.

So, as you can see from the data and chart above, the rental market in Olympia isn’t the greatest, but it isn’t necessarily getting worse.

In every major city, there’s bound to be a few sketchy landlords just waiting to scam you. It’s in your best interest to be aware of Washington’s rental laws to make sure a bad landlord doesn’t pull one over on you.

For those looking to put down roots, Olympia has some fantastic suburbs to choose from.

Seeing as prices are trending upwards, you’ll definitely want to consider cost when looking for a home. 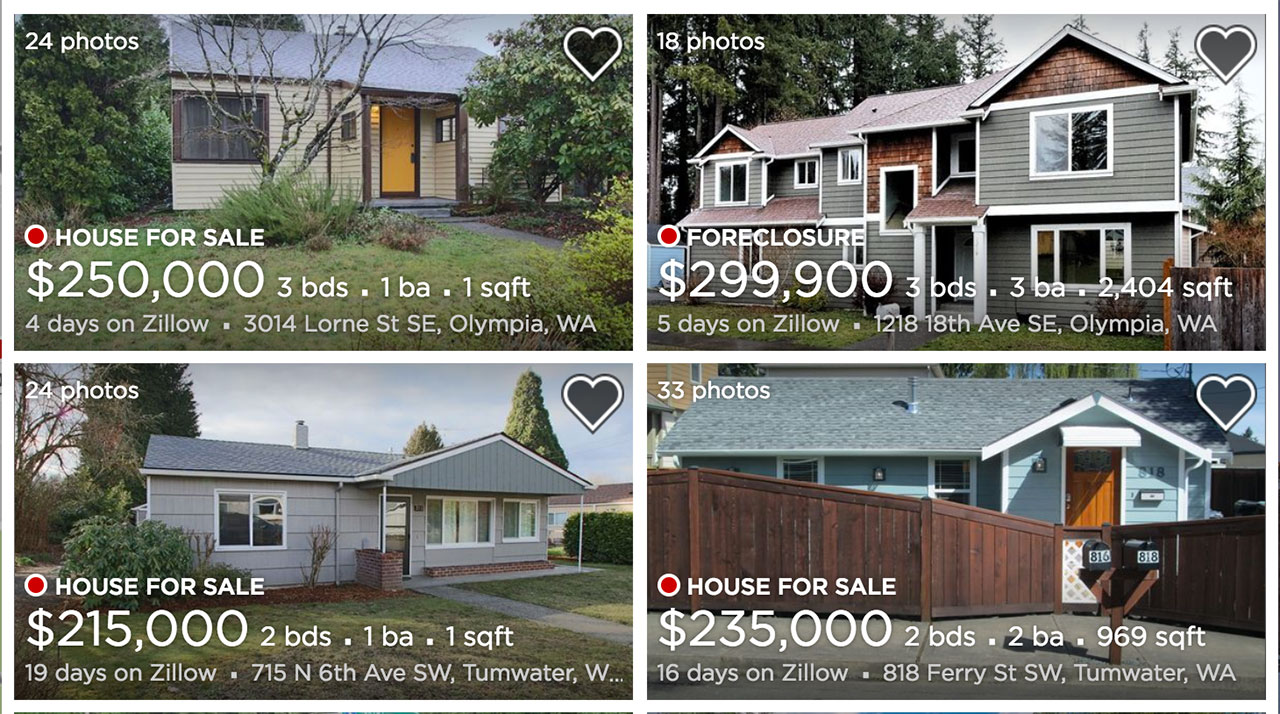 South Capitol is one of the most popular neighborhoods in Olympia, particularly for young professionals and newly married couples. It’s also one of the more expensive places to live, but it balances that out with beautiful historic homes and proximity to the more active Downtown areas. 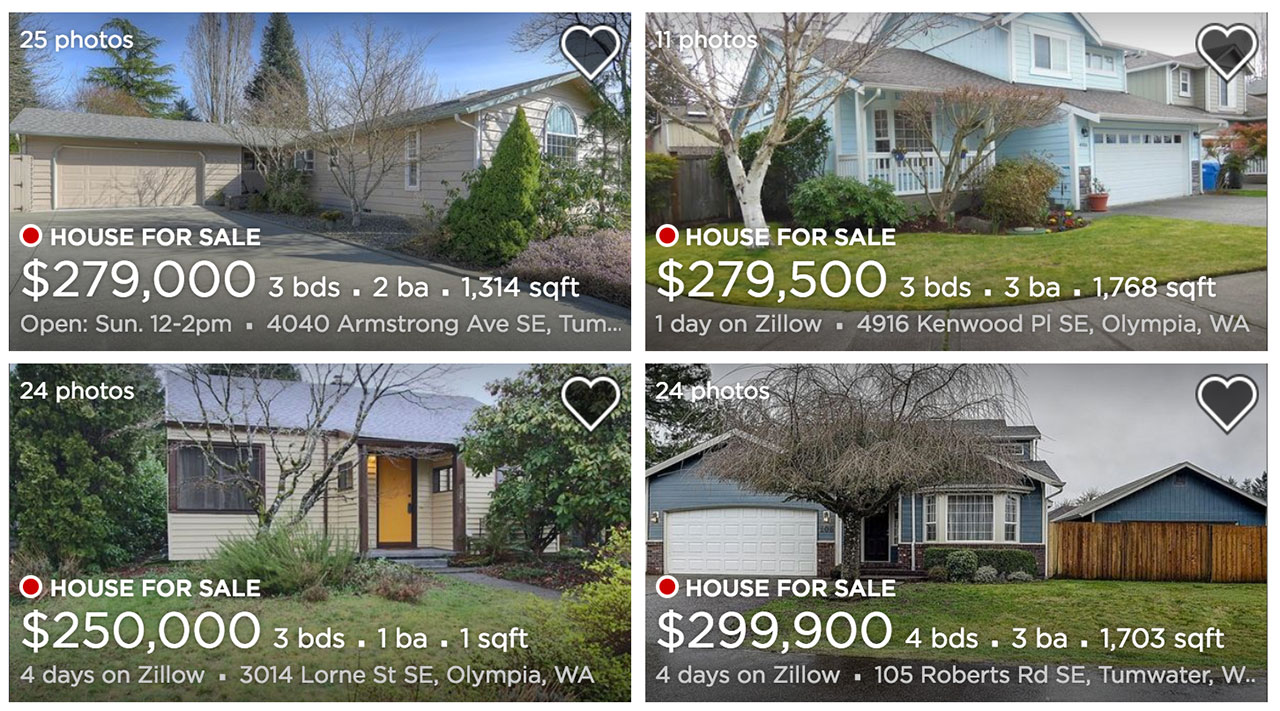 For families with children Holiday Homes has a lot to offer with fantastic schools, extremely low crime rates, and larger, high-value homes. This also happens to be one of the most expensive neighborhoods in the area.

Use our moving cost calculator to estimate what it will cost to move to Olympia.

If you plan on parking a moving truck on a public street in Olympia, you might need to register for a Residential Parking Permit.

You can register for a parking permit from The City of Olymipa for a $10 processing fee.

Congratulations! You’ve gone through all the hard work and are now an official Oly resident. But before you get too settled, there are a few things you still need to take care of.

While it constantly gets outshined by the neighboring city of Seattle, Olympia has plenty to offer in terms of both culture and nature.

It might seem a bit obvious, but a solid first place to look for cool stuff to do is the Visit Olympia website, which lists a ton of stuff most people wouldn’t immediately think to check out. 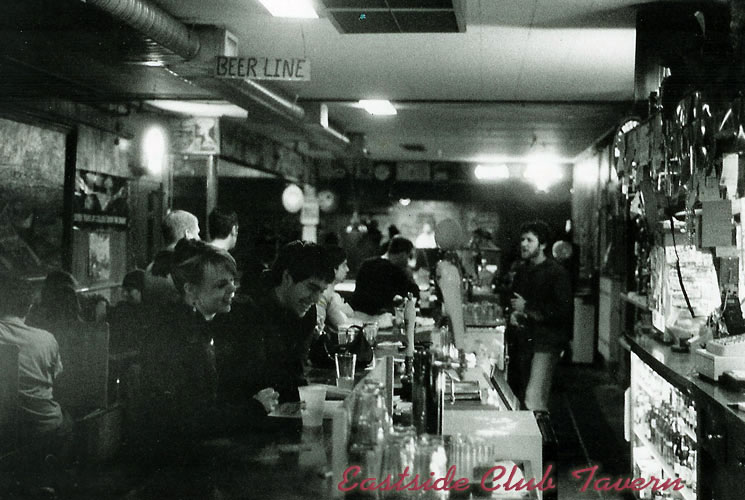 Now, if you’re looking to find your new favorite bar, there are a ton of options. Some local favorites that might kickstart your search include: The Eastside Club Tavern, The Brotherhood Tavern, and The Mark are a few options that offer a variety of styles.

And for people seeking something a bit less Boozy, Turnwater Falls Park, Olympia’s Hands-On Children’s Museum, the Olympia Farmer’s Market are all great options for children and adults alike.