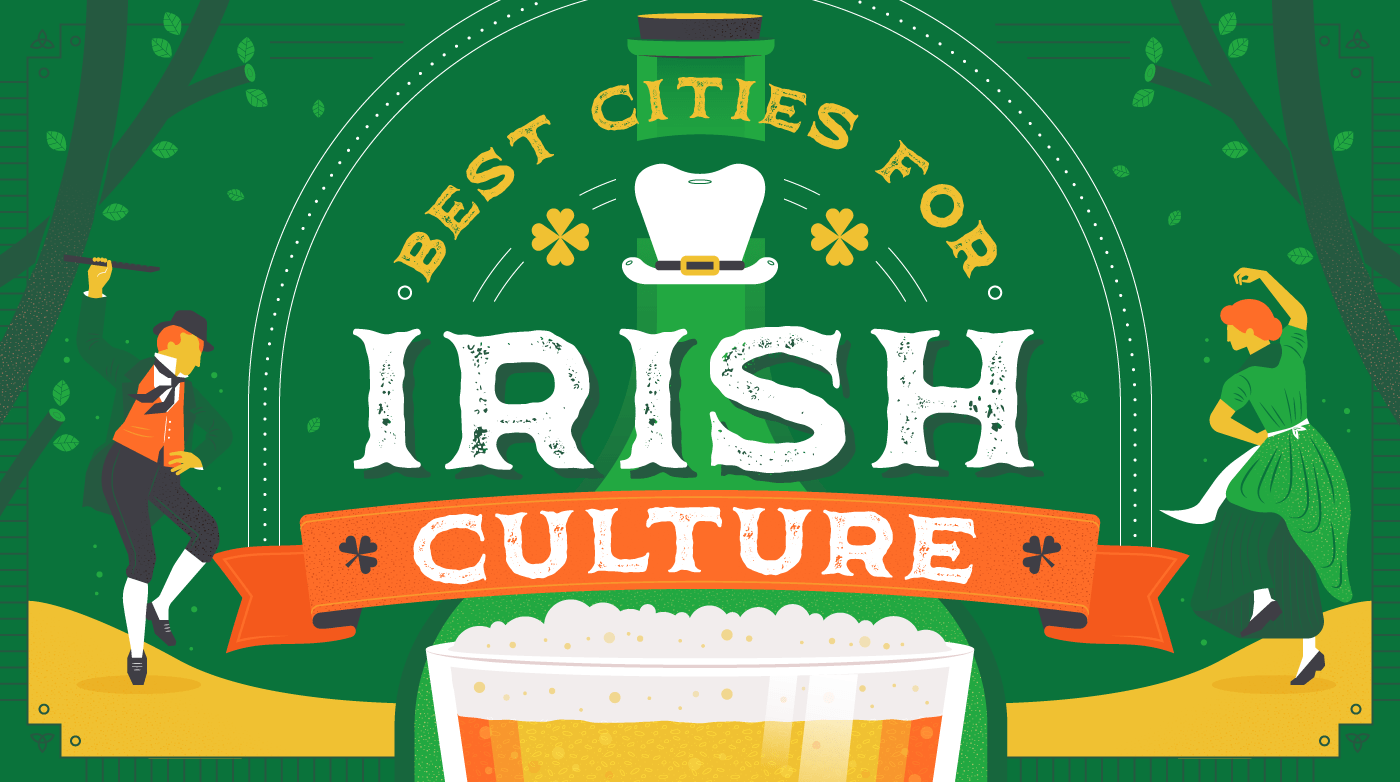 In practically every corner of the United States, there lives a pocket of Irish culture, whether it be locals of Irish ancestry or a pub named O’Connor’s. In fact, nearly 10% of Americans identify as Irish, including U.S. President Joe Biden. (Finnegan is his mother’s maiden name.)

If we look back into American history, the first Irish colonists’ arrival was as early as the mid-1600s!

Over time, Irish-American presence flourished in major cities like Boston, Chicago, and New York. In fact, it was in these cities that the country’s first St. Patrick’s Day festivities expanded from small local events to city-wide celebrations.

While St. Patrick’s Day may have started as an Irish Catholic commemoration of a sainted shepherd, now it has become a day of celebrating Irish culture in a plethora of ways. So whether you are Irish, enjoy Irish spirits or simply have a hankering for a Celtic springtime festival, we’ve uncovered the best cities across the nation for Irish culture year-round.

Details on our full methodology here.

To uncover the US cities best for celebrating and embracing Irish culture all year round, we’ve analyzed the 200 largest cities in America and scored them based on a variety of factors including:

Sorry, Chicago — that green river may be hard to beat on March 17th, but these 25 cities take the cake the other 364 days of the year. 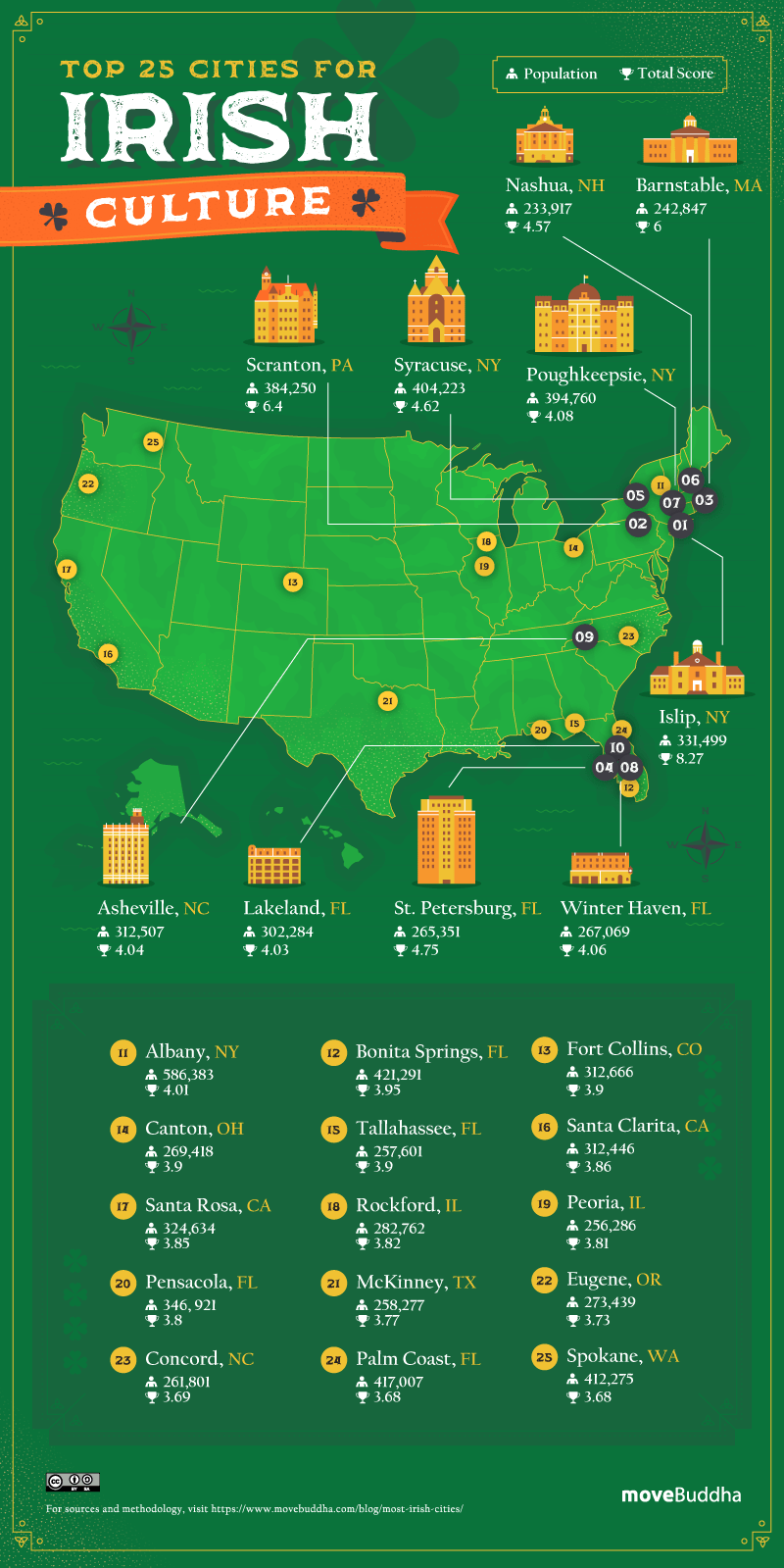 The Most Irish City in America: Islip puts the ‘I’ in Irish

Islip, NY topped our list as the #1 best city in America to celebrate Irish culture, scoring exceptionally high for having a high percentage of residents with Irish ancestry at just over 30% of the population. The only two other cities that even came close to this ancestry percentage are #2 Scranton, PA and #3 Barnstable, MA – both just over 25%.

In general, cities that scored highest when we looked only at the local Irish population density are concentrated on the east coast. Which is no surprise.

For instance, New York saw a major influx of Irish emigrants in 1845 due to the Irish Potato Famine. Irish families left their homes in Ireland in droves to seek a better life in America. The decade that followed saw over 900,000 Irish emigrants entering the U.S. through Ellis. By 1855, the population of New York state consisted of 25% Irish-born. This time period laid the foundation for the establishment of a strong Irish-American community on the east coast.

Of course, these and other Irish families dispersed throughout the country as the years went on.

Of all the 50 states, Florida has the 2nd highest number of Celtic festivals celebrated year-round. Meaning that even without the bloodline, Irish and Celtic traditions run strong.

For example, St. Augustine, FL is actually America’s oldest Celtic city. (Although, the local population here is so small that it wasn’t able to be included in this city ranking.)

In St. Augustine, you will find one of the country’s best Celtic celebrations, the St. Augustine Celtic Music & Heritage Festival. Plus, only a short drive up the coast will take you to our #24 Palm Coast, FL.

The Luckiest 10: The Best of Irish Culture

Every single city in our top 10 is located along the Eastern edge of the nation.

These lucky 10 are a mix of cities overflowing with local lads and ladies of Irish ancestry to others perfect for getting a taste of the lively culture. 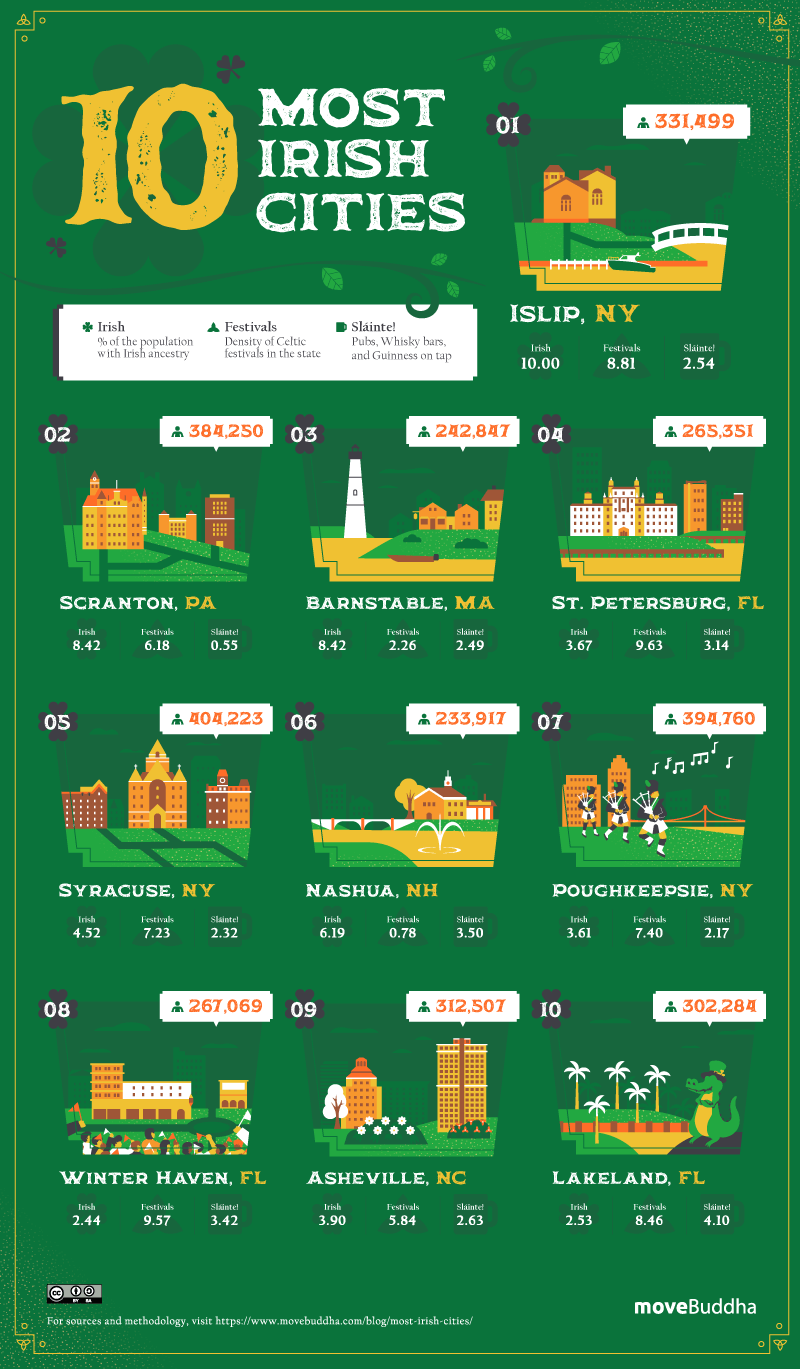 While the U.S. can’t ever measure up to the Emerald Isle (Ireland), a few of these top cities almost make the cut — namely: Scranton, PA (#2); Barnstable, MA (#3); Nashua, NH (#6); and Asheville, NC. With a mix of Irish folks, Celtic celebrations, and a number of options to get your hands on a classically-Irish bevy, we’re sure these cities have more than enough Irish luck to spare.

Nashua, NH in particular ranked #3 of all 200 cities with the best prospects for finding a proper keg of Guinness. Sláinte, Nashua!

We also wanted to know what Americans do to celebrate Irish culture on St. Patrick’s Day.

But first, how many are actually celebrating? 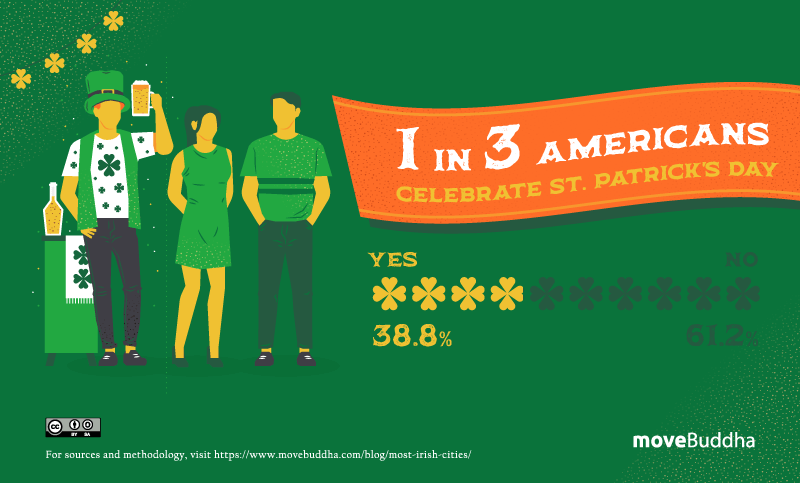 We asked our sample, “What do you do to celebrate St. Patrick’s Day?”

1 in 3 respondents indicated they celebrate this important Irish Holiday in a variety of Irish-inspired ways: 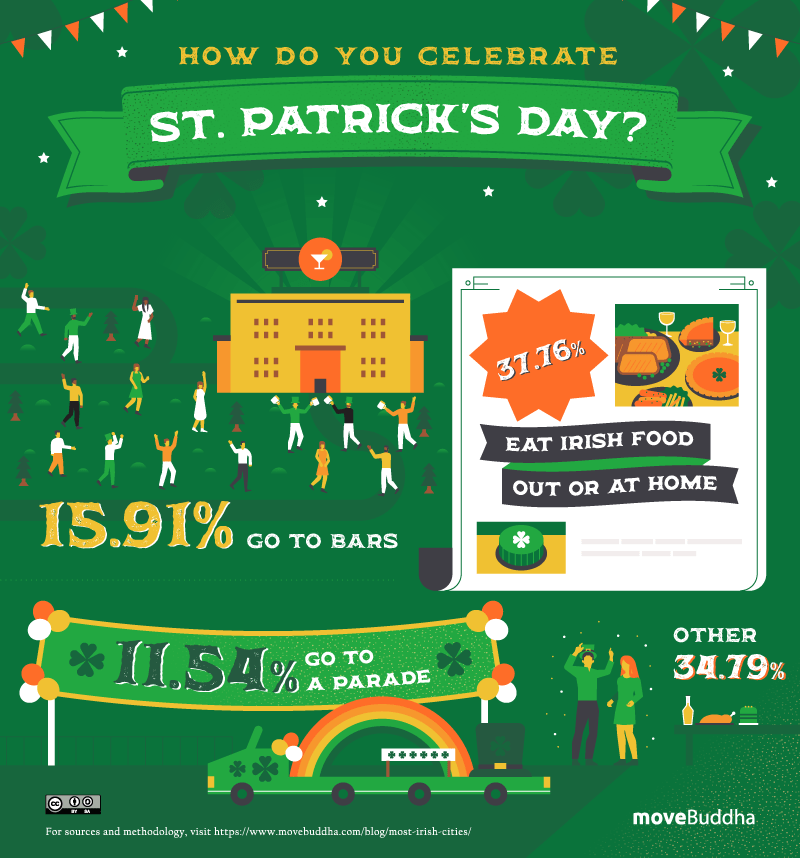 Break out your soda bread and shepherd’s pie recipes – what’s more festive than celebrating with a feast? Of those who do celebrate St. Patrick’s Day, the majority of respondents celebrate by eating Irish food out or at home. Survey respondents aged 65+, in particular, celebrate with food more than any other age group. 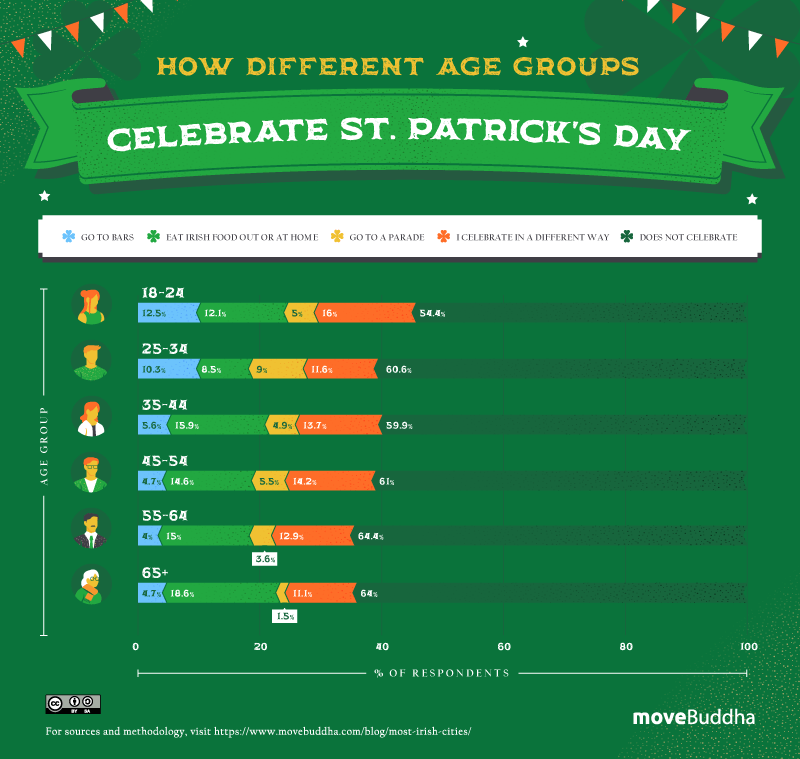 Millennials will be out and about on March 17th. Whether a pub crawl or St. Paddy’s parade, 25-34 responded that bars or a parade are their preferred way to celebrate.

While you probably don’t use “i gcrích” as a substitute for “in conclusion”, there are many English words with Gaelic roots. For starters, ‘whiskey’, ‘galore’, ‘boycott’, and even ‘trousers’ are taken from Gaelic.

There are very few nationally recognized holidays that are in honor of another country, such as Ireland’s St. Patrick’s Day. Despite the fact that St. Patrick’s Day is very much a time to declare patriotism to the Emerald Isle, across America folks both Irish and not deck themselves out in green.

We know March 17th isn’t the only day worthy of celebrating Irish culture! Irish immigrants have played a leading role in the American culture we know today. Thankfully for those interested in discovering more about all things Irish, our top 25 cities are a great place to start.

For each city, we assigned a relative score of 0 to 10 for a range of factors related to Irish population, Celtic celebrations, and where to get an Irish drink. Scores closer to 0 indicate the city had a low level of Irish culture compared to other cities on the list, whereas scores closer to 10 indicate a richer culture.