Since the advent of COVID-19, Illinois residents are leaving the state at faster rates than years before.[1] From January 1 to September 23, 2020, moveBuddha received 2,455 requests (37%) for assistance to move into Illinois and 4,822 (66.3%) requests to move out of state, meaning nearly twice as many people moved out of the state in 2020 than entered.

Additionally, our moving data from 2019 shows that 36.8% of Illinois moving requests represented inbound movers vs. 63.2% for outbound movers. In 2020, inbound movers dropped to 33.7%, and outbound movers increased to 66.3%— indicating a 6.1% net increase of outbound domestic residents from the previous year.

Along with Washington and New York, the state of Illinois was effectively ground zero for much of the country’s initial exposure to COVID-19. The first travel-related case[3] in the United States appeared in Washington on January 15, 2020, with the second case occurring in Chicago on January 24.[4]

While isolated cases continued to appear in several states, little was known about the virus throughout February or how it would affect the U.S. By March 9, Illinois Governor J.B. Pritzker declared a state of emergency[5] after the state’s covid case number reached 11.

Shortly after The World Health Organization declared COVID-19 a pandemic on March 11, Gov. Pritzker ordered schools and nonessential services to shut down temporarily. Before the announcement, Illinois maintained a typical inbound vs. outbound moving rate of 33.6% vs. 60.3%.

Only after March 11, and with the implementation of Illinois’ stay-at-home order on March 20[6], did numbers go askew. For the last two weeks of March, outbound moving requests dropped to 39.7% while inbound requests rose to 66.4%.

Only after unemployment rates began decreasing in August, landing 10.2% in September, did the percentage of Illinois moving traffic drop as well. However, there isn’t a significant correlation between the increase of interstate moving, new COVID-19 cases, and unemployment rates. The only connection between all three factors is that the occurrence of the pandemic accelerated existing moving trends. 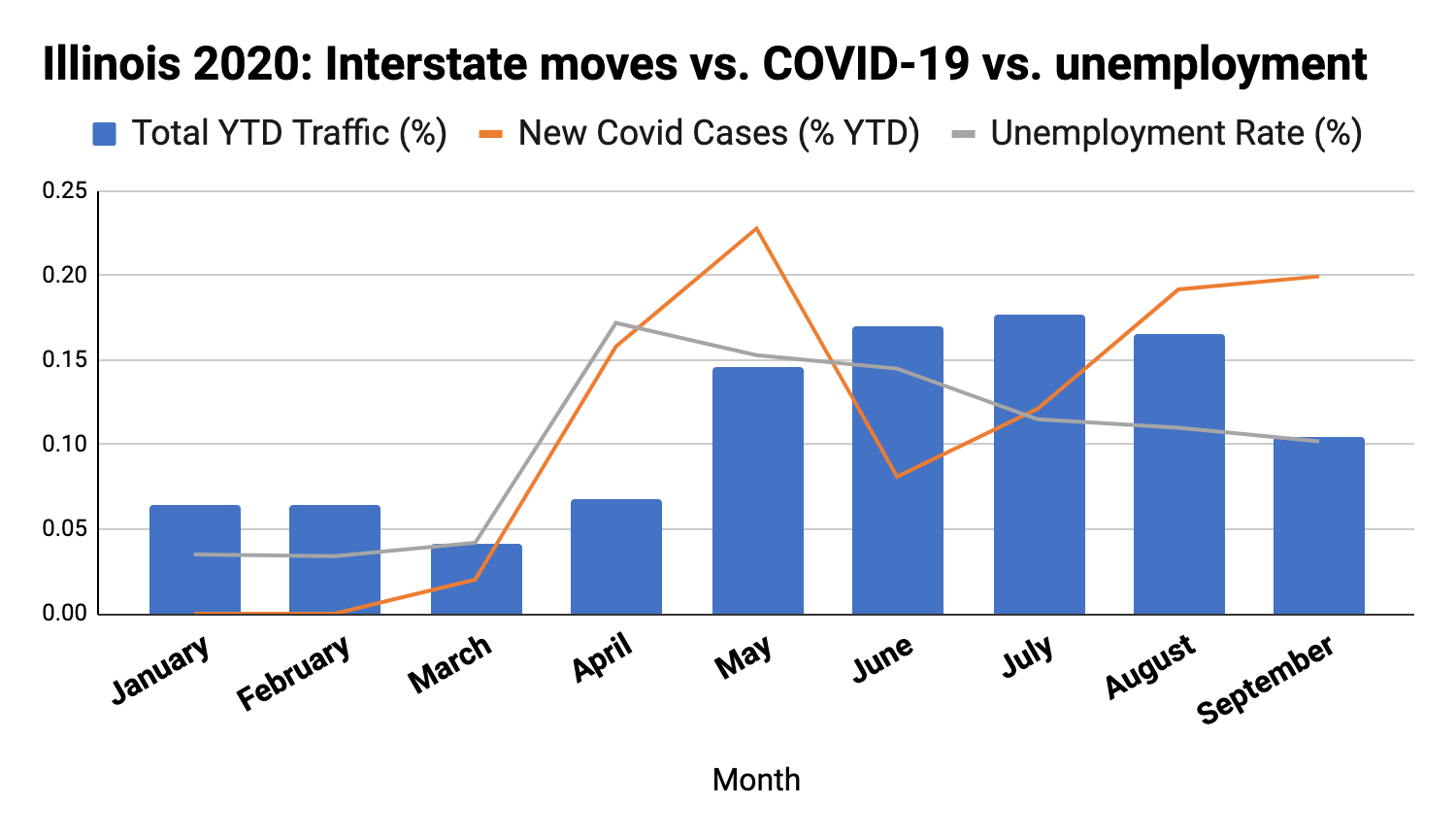 According to the Chicago Tribune in 2016, Illinois residents typically move to southern states with lower taxes and less winter.[11] But considering how most Illinoisians moved to states with similar or worse unemployment levels, it’s more likely that people leave to find more affordable housing.

Indeed, Chicago is a large tech hub with residents who now work remotely.[12] As more companies switch to remote-only employment, fewer people are likely to stay in large cities if they can earn the same salary and pay less rent.

It’s also possible that many Illinois movers originally migrated from other states to find work, as several moving destinations are associated with new Illinois residents. For example, 0.13% of Illinois’ estimated population in 2018 lived in California the year before.[13] Whether this estimate represents native Illinoisians or not, we can infer that a fair amount of people moved home in response to the pandemic.

Other relevant factors that may contribute to people leaving Illinois include:

moveBuddha’s 2020 data indicates the majority of outbound Illinoisians relocated to historically popular states, such as California, Florida, Texas, or Arizona. However, we also noticed how the popularity of individual states changed after the advent of COVID-19.

Data source: moveBuddha’s Moving Cost Calculator Data
The state of New York dropped from the 2020 chart to No. 13, while Michigan rose nine spots from the 18th spot of 2019.

To develop an understanding of why Illinois residents move to these states, let’s compare Illinois against the Top 10 destination states regarding the following economic factors:

Between January 1, 2019, and March 11, 2020, most outbound Illinois residents moved to cities like Seattle, Denver, Phoenix, Los Angeles, and Austin. After March 11, however, several lower-ranking cities moved into the Top 10.

As we can see, Atlanta held the No. 14 spot in 2019 before moving to No. 8 after March. Another surprising trend involves Las Vegas, which rose five spots from No. 10 in one year.

What our 2020 list doesn’t represent are the cities that held a top-spot in 2019 or nearly made the Top 10 before COVID-19. For example, Dallas initially had the No. 9 spot before plummeting to No. 25 in 2020. Portland, Oregon, and San Diego also came close both years but fell short of Nashville’s lead.