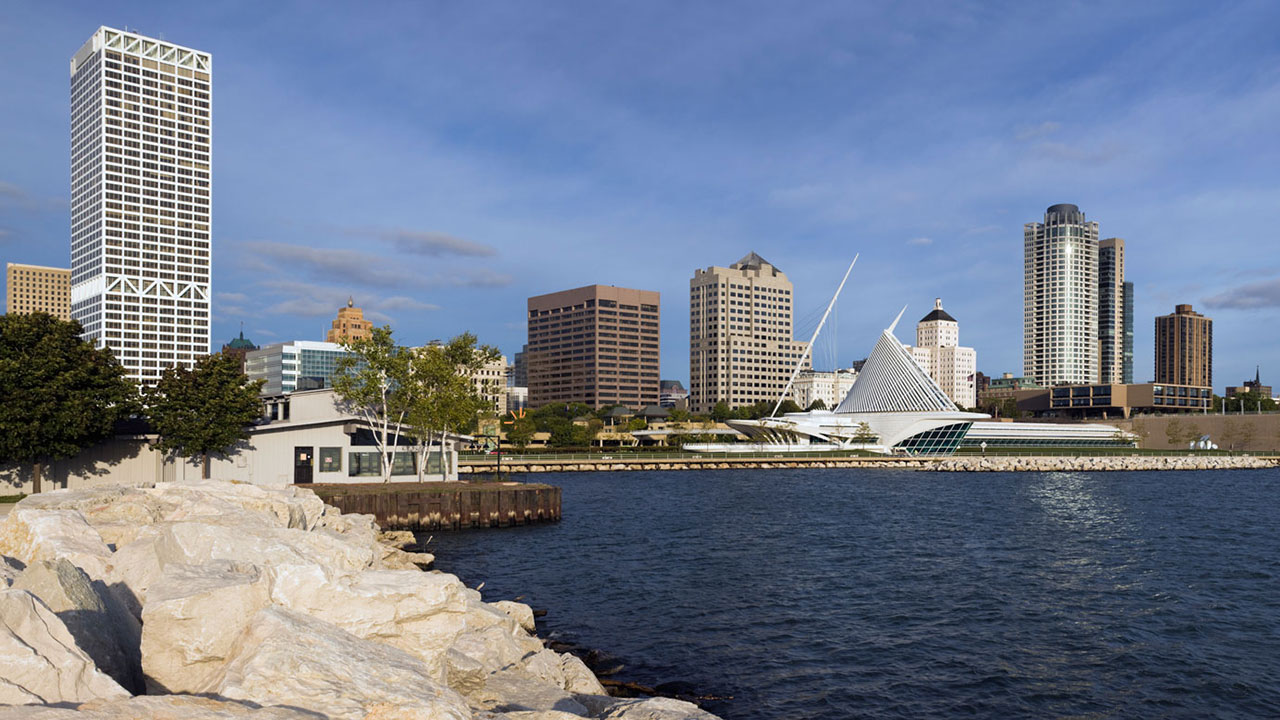 With more than just cheese curds and the home of Pabst Blue Ribbon, the city of Milwaukee offers a midwest lifestyle including idyllic lakefront views along the shores of Lake Michigan. 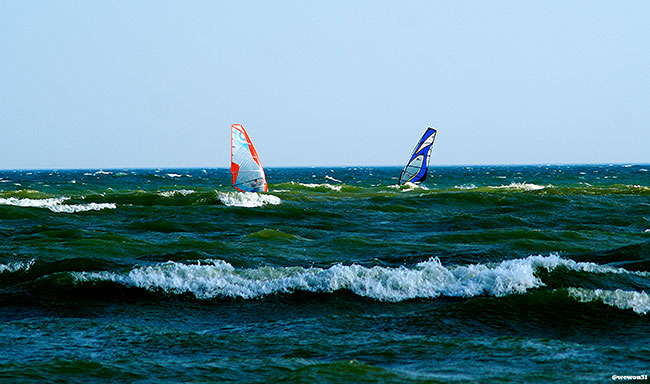 You can go out for some of this brew city’s famous bratwursts and frozen custard and then go windsurfing out on one of the famous Great Lakes. It’s home to the historic Third Ward, Harley-Davidson, the Milwaukee Bucks, and the “world’s largest music festival”, Summerfest.

If you’re looking to move to a new city and can handle heavy snowfall in winter and enjoy lakefront breweries in the summer, check out what it’s like Milwaukee.

Check out some of our best resources for making your move as easy as possible. There are plenty of reasons why someone might like to move here, but you can decide for yourself.

And if you’re looking for more info on moving to Milwaukee, check out our Milwaukee move cost guide. 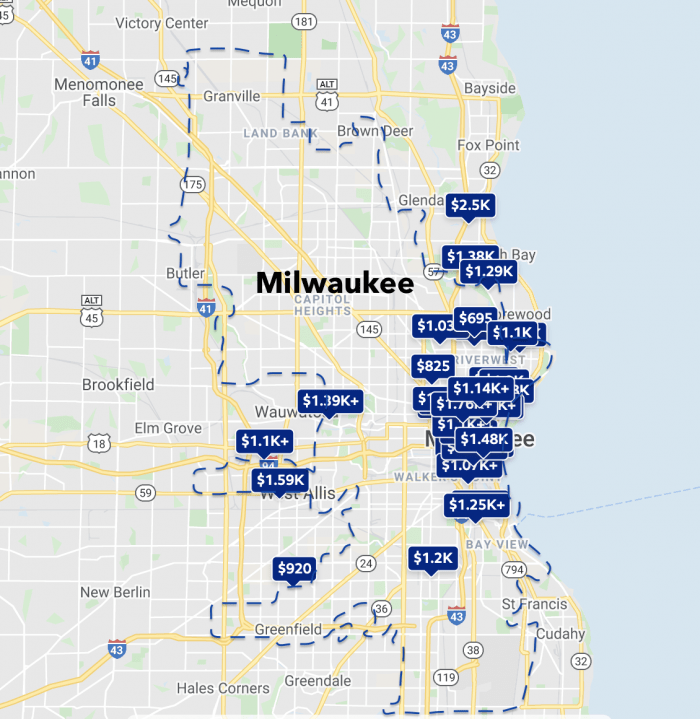 Milwaukee has 13 main neighborhoods, and it’s sometimes referred to as the “Big City of Little Neighborhoods.” Like in all cities, each neighborhood has its own vibe and character, along with its own rental prices. This website does a really great job of describing each neighborhood.

To help you budget for a Milwaukee apartment, we’ve compiled data from Trulia to demonstrate how much each region will run you. 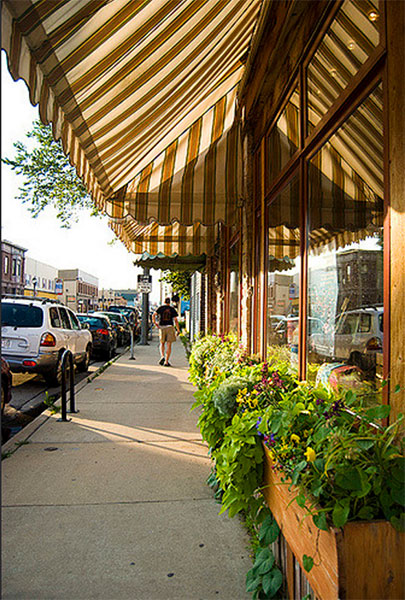 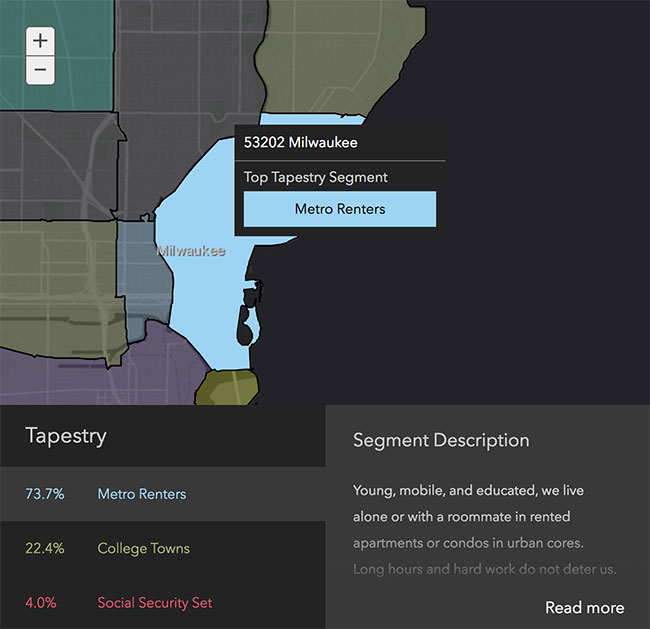 Everyone wants to live near people they have things in common with. Esri.com makes finding those places easy with their zip Tapestry tool, showing you the dominant demographic groups of any neighborhood.

For instance, plugging in the zip for the Historic Third Ward (53202) shows you a cross-section of the three largest demographic groups in the area. It’s pretty amazing.

That perfect neighborhood could have a horrible commute. Be sure to figure out how you’ll get to work before you sign a lease (or a mortgage!)

Here’s a breakdown of what it’s like getting around the city:

If you want to have a car…
Milwaukee is super accessible by car. Due to its well-planned and maintained roads and two interstates, travel is easy for Milwaukeeans.

The average commute time is 22 minutes, which is the THIRD LOWEST of America’s metro areas. By comparison, Atlanta is more than a half-hour!

As usual, peak rush hour times are between 7 and 8:30 a.m. for traffic headed into the city and from 4 to 5:30 p.m. for traffic leaving downtown. But don’t forget, the Milwaukee area is known for being a city of festivals, so first-time visitors should check to see if there’s anything going on before heading out. 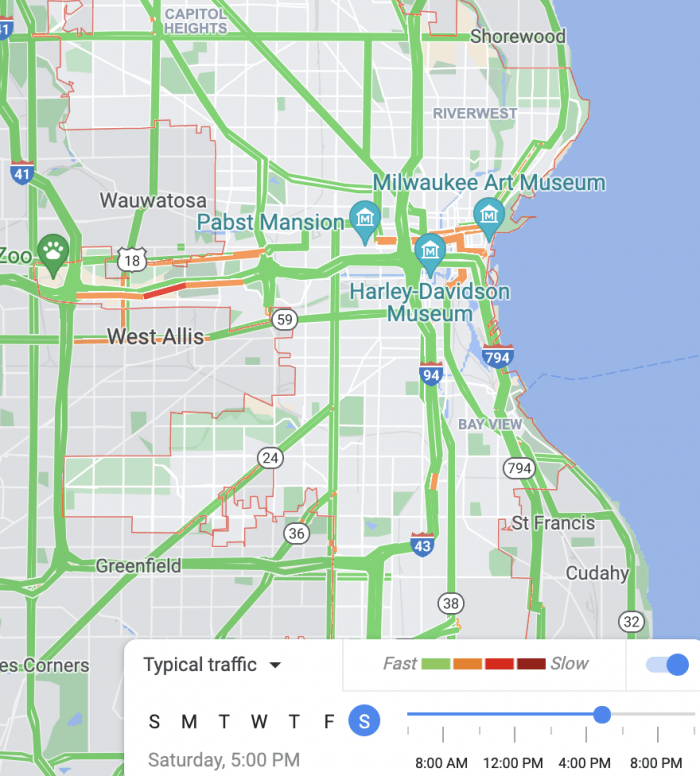 Below are some of the major choke points throughout metropolitan Milwaukee: 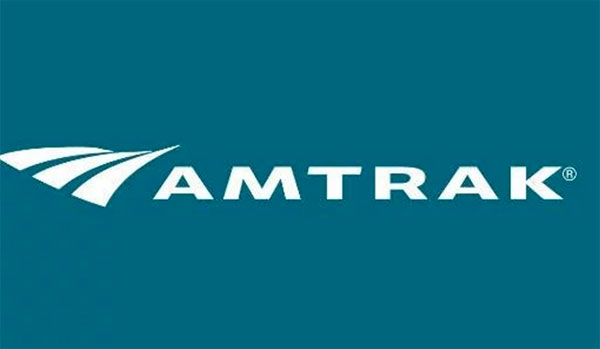 Though it doesn’t have its own subway system like New York, Milwaukee does have an extensive bus network.

Below is a snapshot of Milwaukee’s bus map. For instance, if you live near Marquette University and need to get to the US Bank Center downtown, you could take the 30 bus on a straight shot! Here is a huge guide and full map of Milwaukee’s public transit system. 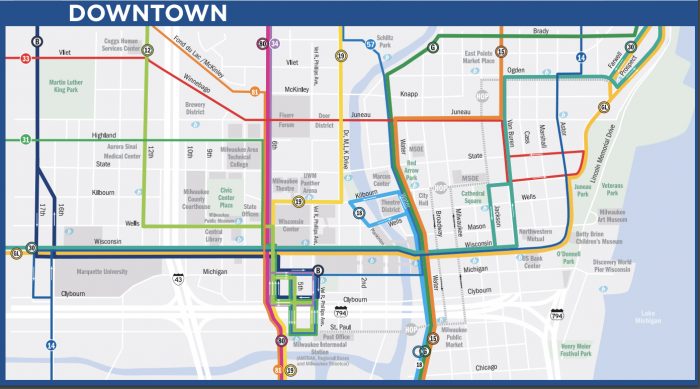 If you plan on commuting to Chicago, it’s about a 90-minute Amtrak train from Milwaukee. The Amtrak station is located right in the middle of downtown at the Milwaukee Intermodal, so it’s super convenient.

Bottom line: with a transit score of 48, the public transportation system is good, but still not great. It can get you almost anywhere inside the city within an hour. If you’re not planning on having a car, you’d better get used to taking the bus, because you’ll be taking it to lots of places.

In terms of walkability, Milwaukee is pretty good! With a walk score of 63, it’s a bit better to walk than it is to take public transportation.

Downtown Milwaukee is very walkable, from the Upper East Side down to the Historic Third Ward.

Below is a walk score map, similar to the rent price heat map we talked about earlier. The greener the better. If you don’t like walking, stay away from the yellow when looking for neighborhoods to live in. The good thing for you is that Milwaukee doesn’t have any red zones! 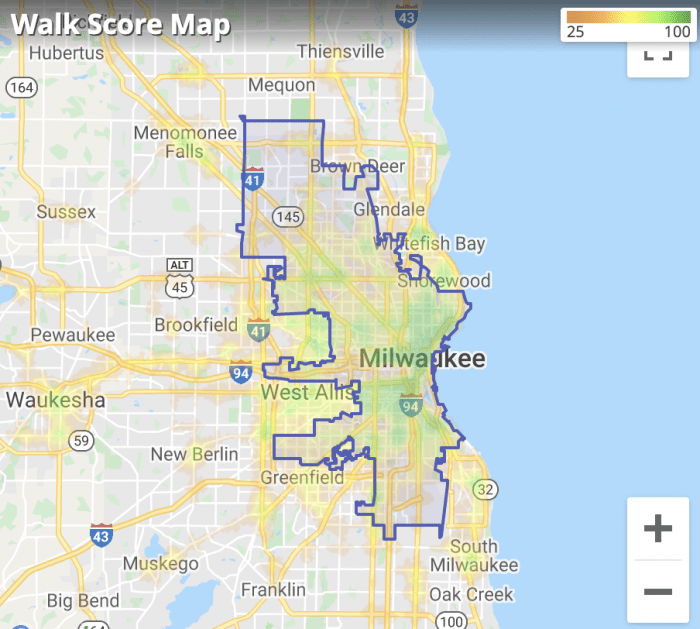 The Harley-Davidson Museum. This place was built to thrill you with the history of life in the fast lane. 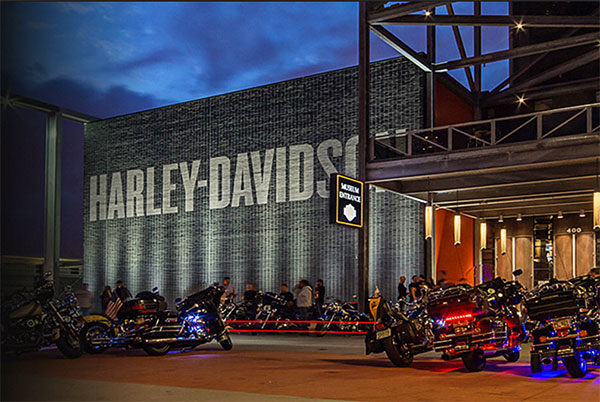 Miller Park is the home of the Milwaukee Brewers, and also some of the best beer and brats in town. You can also ride down Bernie Brewer’s slide in the outfield! Yeah, it’s just as much fun as it sounds. 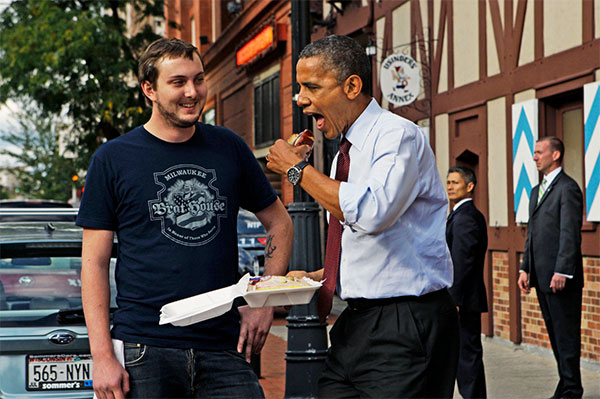 We’ve talked about Milwaukee’s beer and brats. If you’re downtown and looking for a good time, check out Milwaukee Brat House, between Avenues West and the Lower East Side. They’re so good, The President had to try some!

So beer has lots of calories right? If only there were a way to burn off those pesky pounds while you drink! Well, look no further than Milwaukee’s Pedal Tavern. It’s a 16-person bicycle-powered party on wheels! If you’re into craft beer and biking, this is for you.

Milwaukee is a great place to be for foodies. With the Friday night fish fry honored at many restaurants in the city and in greater Milwaukee, ice cream from the dairy-loving capital of America, and all types of cuisines served during the many cultural and ethnic festivals throughout the year.

Milwaukee scores 8 on the crime index. For reference, 100 is the best.
Here’s a crime hotspot map: 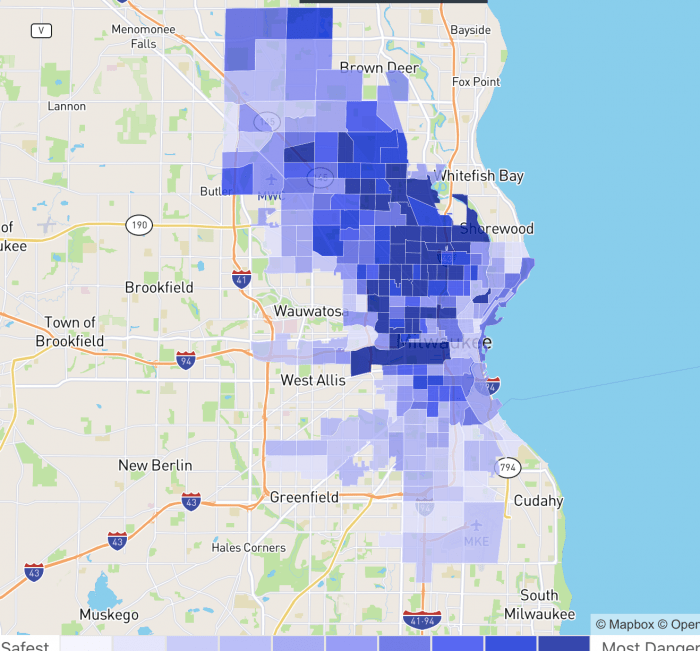 The Fifth Ward/Walker’s Point are areas to be a little more vigilant, especially at night.

Like any city, Milwaukee has its crime issues but it’s a relatively safe city. As long as you don’t go seeking trouble, you should be fine. 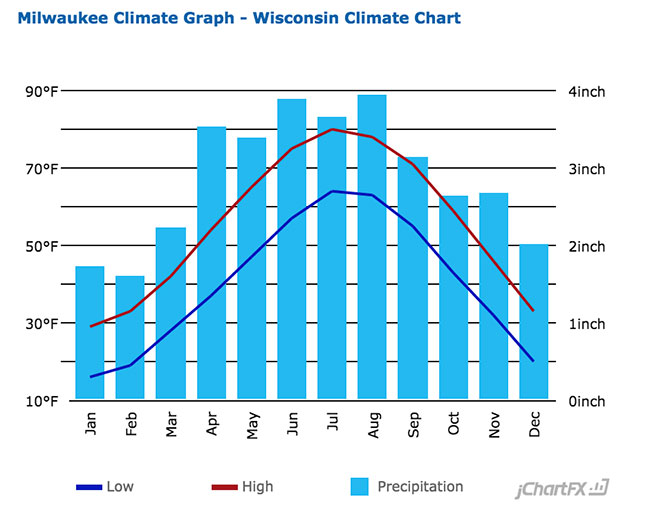 Yeah, it gets cold. In January the 24-hour average temperature will be 22 degrees.

In fact, Milwaukee has the second-coldest average annual temperature of the 50 largest cities in the United States–so you’ll definitely need a heated apartment.

Surprisingly, the highs in July can get above 90 degrees! You should probably look into a place with AC, though it isn’t as vital as heating.

Laundromats aren’t hard to come by, but if you’re planning on going without a car, a washer/dryer is a must-have. You don’t want to be walking around the neighborhood carrying dirty undies.

When budgeting for an apartment, you’ll want to think about what your average gas bill will be for heating your home.

Where to look for apartments in Milwaukee

Here are some good websites to find apartments. Use the sort functionality to drill down on your desired number of bedrooms, cost of living, etc.

It might surprise you, but Craigslist is actually a very useful site for finding apartments.

Finding an apartment in Milwaukee is very competitive

Milwaukee’s rental market is just about as competitive as it is throughout the country.

Essentially, Milwaukee rent is high and not lowering fast, but an influx of new developments is helping to increase vacancy and lower prices.

There’s a couple of things to keep in mind when managing your time while finding an apartment. Leases usually begin on the first day of the month, so at the very latest you should start looking two weeks before the start of the month you’d like to move in.

Milwaukee is home to Marquette University, so leases in the Avenues West area will be ending in the spring, probably May 31st. If you can, the ideal time to start looking for apartments there is in April or early May, and be ready for a June 1st move-in. 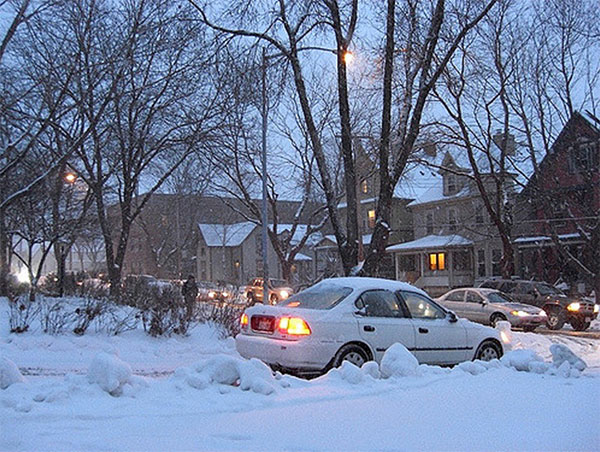 Additionally, Milwaukee’s winters are very cold and bring lots of snow. Try to avoid moving during the winter or you might get snowed out.

At the same time, beware of a spring move-in: potholes will be everywhere because of the melting snow.

Just in case the city life is too much fun for you.

The nicest suburb of Milwaukee is Whitefish Bay. It’s about a 15-minute drive from the city, but keep in mind that this trip can be longer during rush hour.

Like most fancy suburbs, it has beautiful Tudor-style homes and large yards. It’s also technically a “village,” so that’s pretty neat.

You can look for homes in Whitefish Bay here.

Now for the real fun–moving!

If you want to get an idea of the cost of different moving services, check out our moving cost calculator. If you’re moving pretty far, you also may want to have a glance at our moving out of state guide.

A few other things you’ll want to keep in mind.

Moving Permits: moving to the city is always difficult because of thin roads, sidewalks, and constricted space.

For a moving van, you must provide an RPP permit number, the street address where the van is to be parked, the license plate number of the vehicle, the state of issuance, and a description of the vehicle.

If you’re moving outside of the city limits, check with your local town hall or parking authority for street parking requirements.

That’s about it! Let us know down in the comments how your move to Milwaukee goes.