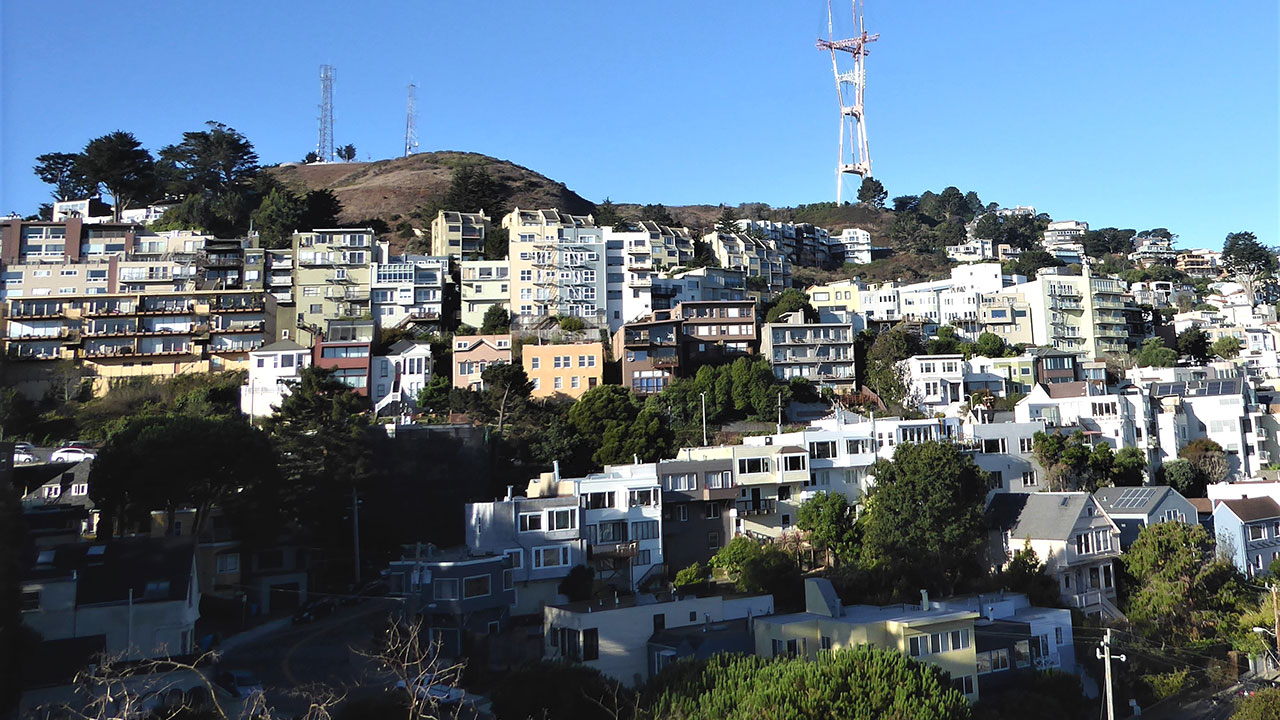 The population of San Francisco has been in something of a state of flux in recent years. With the tech boom initially attracting people to the city, the rising cost of living has begun driving people away.

With so many people coming and going so quickly, it might be helpful to get an idea of where exactly these people are coming from and what areas they’re leaving for. To do this, we’ve combined all moving data from the past year to help provide a clearer picture of the city’s migration patterns. 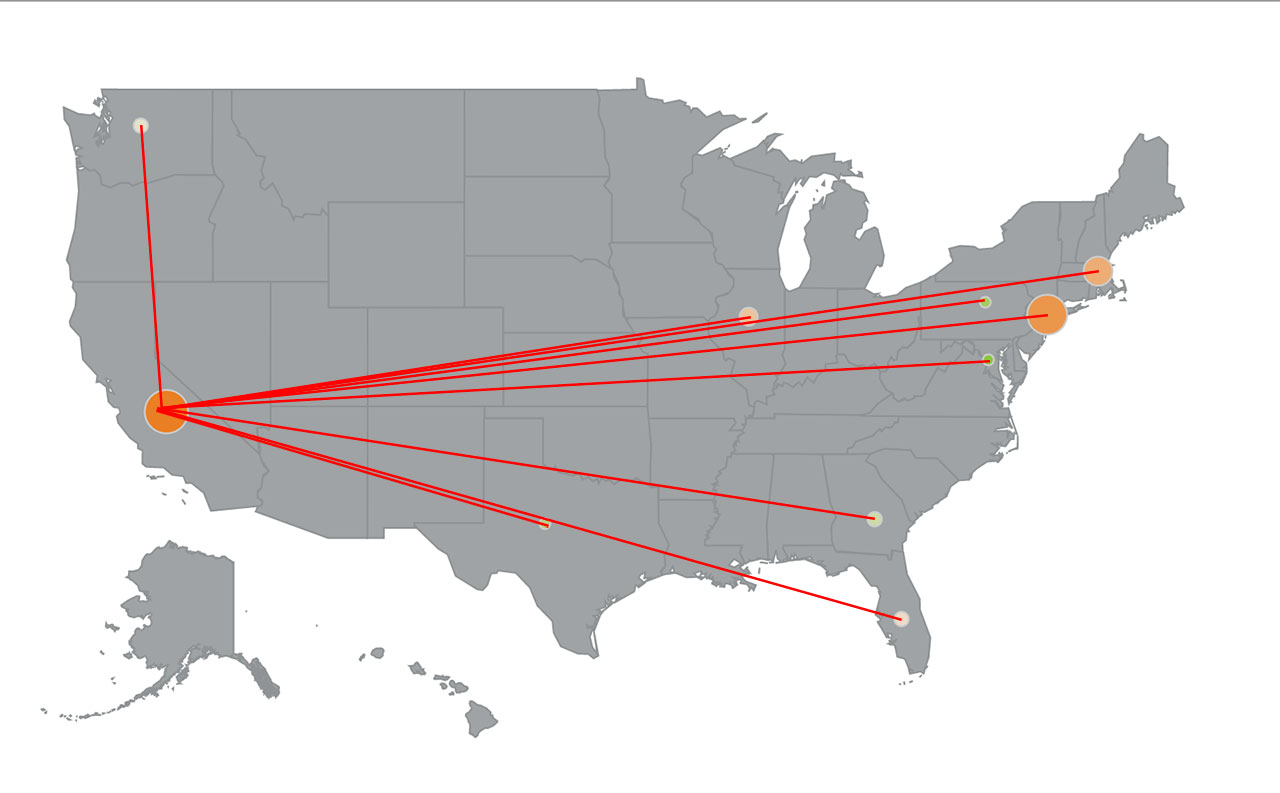 On a broader spectrum, you’ll see a lot of the typical states with major cities on this list, including New York, Illinois, and Massachusetts.

And since it’s one of the larger cities in the state, it makes sense that people from throughout California are drawn to San Francisco.

Surprisingly, Florida made it on the list with no individiual city ranking in the top ten.

And speaking of individual cities…

Where are people moving to San Francisco from? 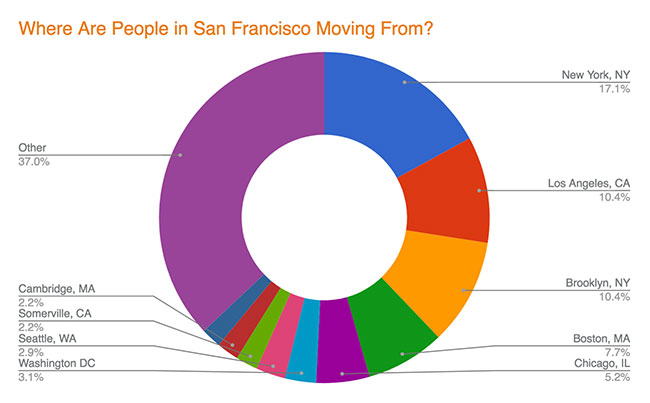 And cities with sizeable tech scenes like Seattle, Atlanta, and Austin also have a pretty strong showing.

It’s somewhat surprising that Somerville ranked so high, but it is located fairly close to San Francisco.

Even with a decent influx of people, there are plenty looking to get out of the Bay Area.

You’ll notice that people in San Francisco are going to a lot of the same places people are coming from. 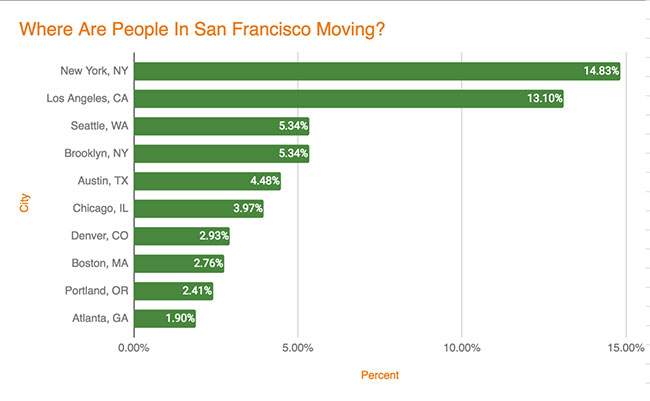 Top 10 Cities People in San Francisco Are Moving to 2018

There’s a lot of exchange between the major US cities, most likely due to people switching between major companies and regional branches.

There also appears to be a lot of people leaving San Francisco for other, (relatively) more affordable cities within the tech industry.

It would also appear that “trendier” cities like Portland and Denver are drawing people away.

So what happens when we put all the data together?

Between the large population fluctuations and the fact that people are coming from and going to the same cities, the best way to get a good idea of the data is by looking at net gains and losses. 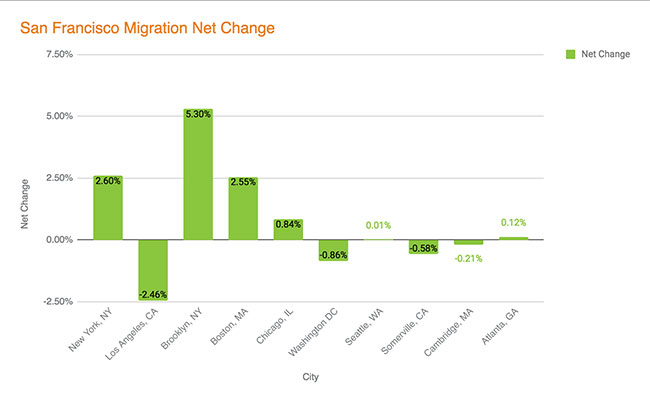 While the percentage difference may not be large, it’s interesting that San Francisco is losing people to four cities out of the top ten people are coming from.

Brooklyn has the largest gain by far, probably due to East Coast entreperneurs heading to Silicon Valley.

It’s also interesting that Seattle is essentially losing as many people as it’s gaining from San Francisco.

Hopefully, these numbers help to give you an idea of who are drawn to the city and whether or not moving to San Francisco is a good fit for you.

Our Data:
Throughout our years of facilitating long-distance moves, we’ve noticed many trends which might be of not to people trying to get a feel for a new city. Below, you’ll find a breakdown of where people are moving into Philadelphia from and more based on our own data as well as info from the US Census Bureau.