In mid-June of 2022, Jarom, his wife, and their dog made a work-related move from Springville, Utah to Tampa, Florida.

Since they were only moving about 1,000 pounds of boxes and furniture, Jarom booked a portable moving container with U-Box.

As a refresher, U-Box is the moving and storage container service offered by U-Haul – the biggest name in the do-it-yourself truck rental niche. 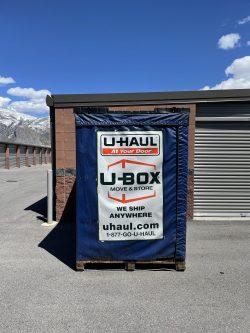 Unlike some of its biggest competitors, U-Box only offers one container size. That said, they’re perfect for small moves like Jarom’s.

Throughout his move, Jarom participated in our Better Moves Project by sharing his experiences with U-Box.

In this post, we’ll look at what went well, where improvements could have been made, and whether Jarom would use U-Box again.

Keeping moving costs low was a priority, but working with a reliable, experienced, and trustworthy company was equally important.

In addition, Jarom wasn’t keen on driving a moving van from Utah to Florida. Moving containers made the most sense since he and his wife were only moving the contents of a 1-bedroom apartment.

They moved a few pieces of art, but nothing particularly valuable or fragile.

In the early going, their biggest concerns were managing the logistics of their move and ensuring that nothing got damaged.

Jarom’s move at a glance

The quote process was easy

Jarom knew about his relocation about six months before his move date.

Since he was serious about working with a reputable company, he spent nearly a week researching and vetting candidates.

During the process he:

Each company had its pros and cons, but U-Box came through with the lowest quote that included transportation and one month of storage.

Jarom chose U-Box for its reputation and competitive pricing

Jarom’s decision to use U-Box boiled down to affordability and positive reviews.

He booked his container online but verified everything via phone.

Later, he received helpful information about what to expect on move day and how to load the container properly.

Jarom prepared by finishing the packing and ensuring everything was ready to go on move day.

He opted to purchase additional insurance and paid a $1,200 deposit the month before his move.

Throughout the quote and booking processes, Jarom felt confident that he and his possessions were in good hands. 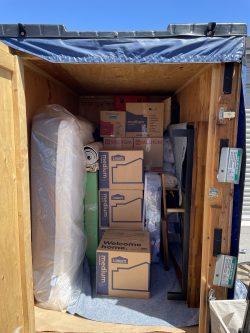 U-Box confirmed Jarom’s services and dates by text and phone.

The truck arrived on time at 9:00 AM on move day, and the driver placed the container exactly where Jarom wanted it.

Since everything was packed and staged, loading took less than two hours.

Afterward, Jarom called U-Box to let them know his container was loaded and ready to be picked up.

Delivery was equally as painless

Jarom got a text message when his container arrived in Tampa and another confirming the delivery date to his new residence.

A local U-Box Partner delivered the container. Jarom’s quote didn’t include labor, but the movers that dropped off the container helped him unload it free of charge so they wouldn’t have to come back later.

Ultimately, his container was delivered on time, nothing was missing or damaged, and he got free labor to boot.

Talk about a smokin’ deal.

Jarom paid the remainder of the bill by credit card on delivery day. Later he received a post-move survey from U-Box via email.

The verdict – how did U-Box stack up?

There were no surprises or annoyances on Jarom’s move. Jarom was satisfied with how the move went and was pleasantly surprised by the lack of surprises that came up along the way.

He’d use U-Box again and recommend the company to anyone planning a move like his.

What Jarom learned along the way

According to Jarom, there’s no better way to move a studio or 1-bedroom apartment affordably and efficiently than with U-Box.

In his case, U-Box was far cheaper than the competition and even less expensive than renting a moving van when gas, food, lodging, and tolls were factored in.

If you’ve ever wondered how much you can fit in a U-Box, you can ask Jarom next time you see him in Tampa.