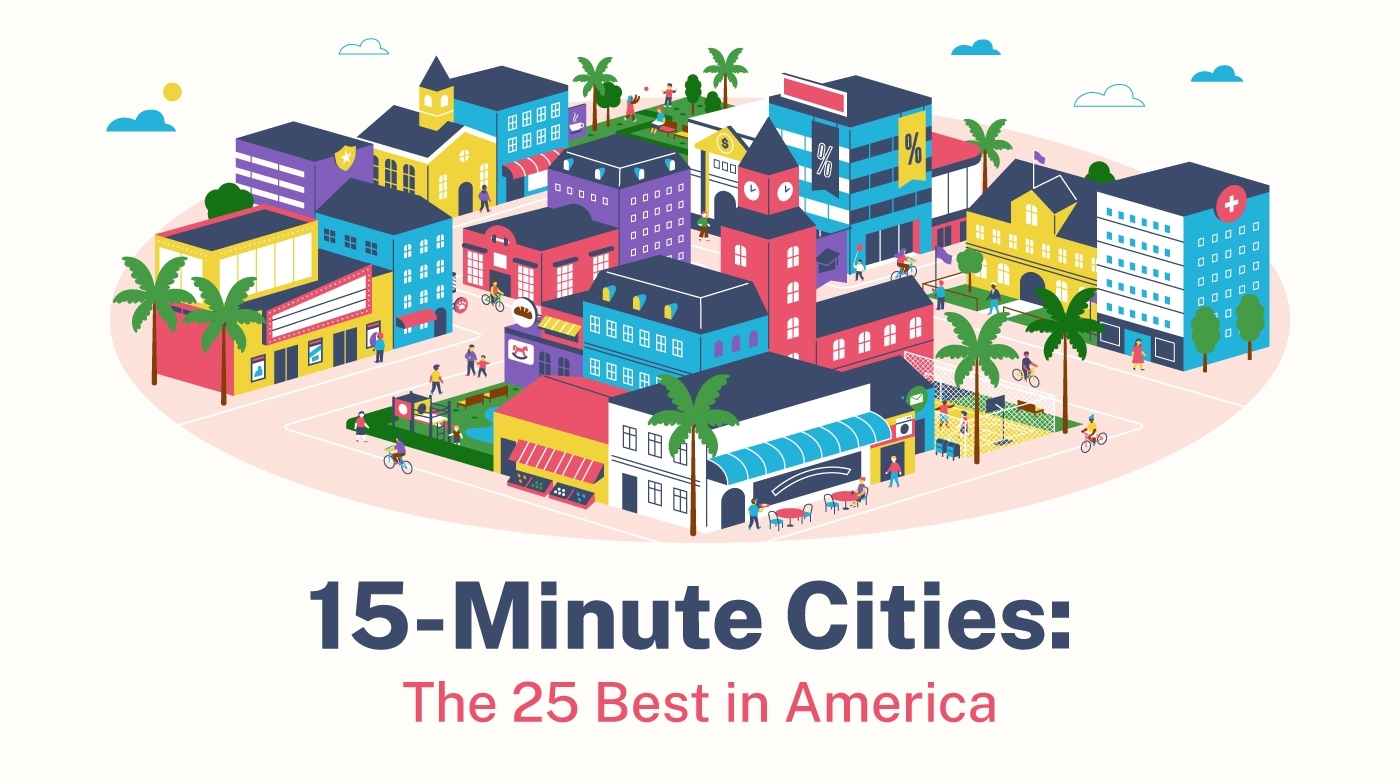 Pandemics are tragic and scary. However, they often highlight opportunities to meaningfully improve urban living for individuals and the community.

For instance, the 1793 yellow fever outbreak in Philadelphia launched city-wide clean-up initiatives and the installment of a waterworks system.

One popular concept hailing from Paris is the 15-minute city.

It’s a city in which, wherever you live, everything you need is located within a 15-minute walk or bike ride away.

While European in concept, many American cities such as Portland, Detroit, and Seattle are also looking for similar solutions. They endeavor to rebuild their cities into walkable, bikeable, and socially connected communities.

Following this concept, we wanted to know: which of America’s largest cities have the greatest potential for transitioning into a 15-minute city?

Looking to move to one of these cities? Try our free moving cost calculator, and check out the other materials on out site, including recommendations for the best moving companies, container companies, and useful moving tips.

For simplicity, the 15-minute city ideal brings to mind European cities like Amsterdam, Copenhagen, and, of course, Paris.

The simple formula is that everything you need (food, healthcare, schools, green spaces) should be within a 15-minute walk or bike ride from your home. 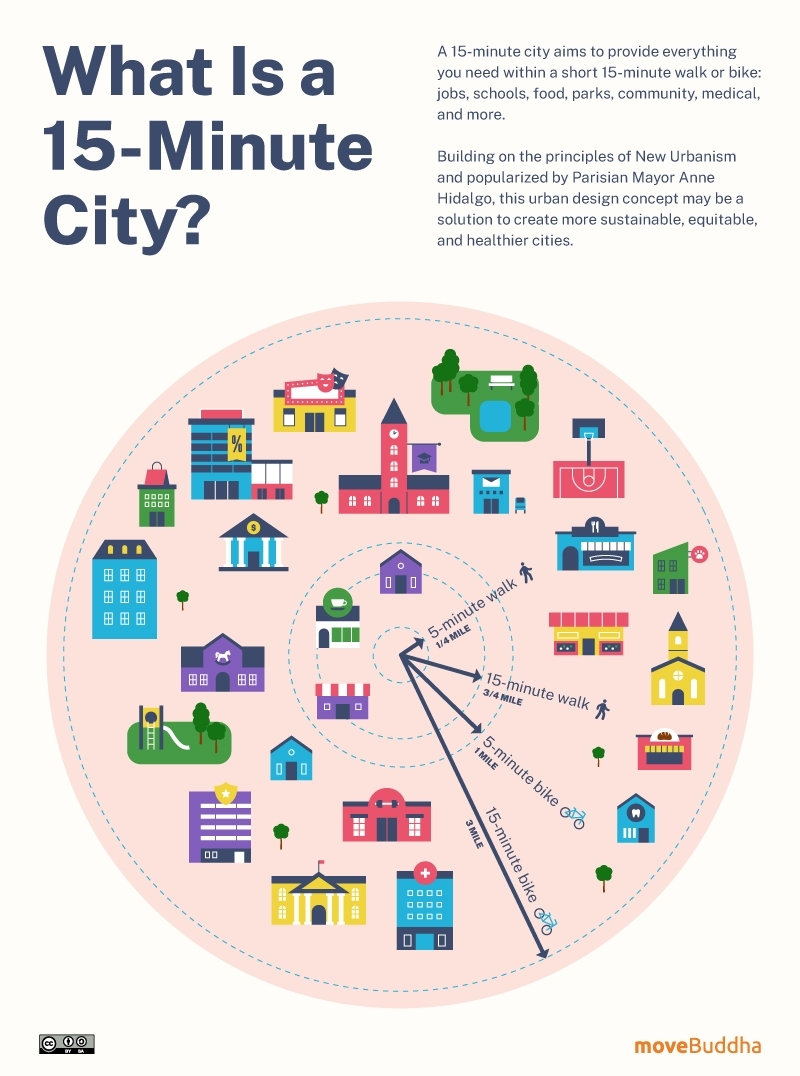 Some definitions include public transit, but that can present a multitude of discrepancies, especially when evaluating US cities. Most modern American cities were designed with cars in mind, which would make it difficult to adapt the infrastructure for sweeping 15-minute walking and biking accessibility.

Projections suggest that by 2050 around 89% of the US population will be living in cities, and some studies find that changes in urban planning could reduce mortality by an estimated 20%. With this in mind, implementing changes to urban areas that promote health, encourage social interactions and movement, and reduce pollution could reap positive benefits for years to come.

We evaluated the walkability and bike-ability of American cities alongside the density of necessities to uncover the US cities with the most potential for transitioning into a 15-minute community.

Our list of cities includes the country’s largest metropolitan areas with populations of 250K+. A quick glance at the top 25 clearly shows that cities with populations between 250-750K are dominating the best-of 15-minute cities.

Two exceptions to this trend are sprawling Chicago, IL, and Philadelphia, PA. Philly urbanists have dreams of banning cars from the city center and transforming streets by planting one million trees. While Philly offers significantly better walking weather than Chicago, if you can face the wind, Chicago is composed of many different neighborhoods that offer opportunities to implement a 15-minute city strategy.

The average walk and bike score for all cities in our analysis sit at a medium 5.9. The top 25 best 15-minute cities all have much better scores, averaging 7.2.

Lexington, KY just makes it into our list coming in right at #25 with an absolute perfect walk and bike score of 10. A relatively small city (323,152 pop), Lexington has a historic downtown and a program in place (Town Branch Commons Corridor Project) for developing and expanding bicycle and pedestrian access across the city. In 2016 the city was awarded $14.1 million to complete the project, and the Town Branch Fund is leading a $50 Million capital campaign.

The top two cities are Miami, FL, and San Francisco, CA. Wasn’t there a migration from one to the other this past year?

Miami may not be the first city you’d suspect as a 15-minute locale, but thanks to a collection of small urban meccas across the city with pedestrian-friendly designs, the transformation is in full swing. Other efforts include projects like the Underline working to repurpose surfaces under the Metrorail into gardens, walking paths, and open-air gyms.

Miami is also home to start-up REEF, building a network of hyper-local urban hubs to connect local residents to local goods and services in cities across the nation.

One limitation we can quickly see for both cities is affordability. Luscher himself observes that exceptionally designed neighborhoods are desirable and rare, which can drive up the cost of living and price out lower-income residents.

That’s where cities like Pittsburgh, Baltimore, Minneapolis, and Cincinnati can offer more affordable options for those who prioritize walkability and bikeability. All four cities have populations under 500K, great access to a wide range of necessities, and, best of all, have housing affordability scores that are much more feasible.

Sold on the idea of moving to a 15-minute city? Consider comparing the costs with our moving cost calculator before deciding. You can get a quote for the moving costs between any two cities in the U.S. in minutes.

We compiled data from a range of sources to understand the density and diversity of community services and community amenities for local residents.

We divided each of these into one of 5 categories, to emphasize, commutability, social and physical health, childcare (education), medical health and safety, and home affordability. After grading each factor, we determined the scores on a scale of 1 to 10, with 10 being the best.

Final rankings: First we compiled the factor scores (1-10) within each of the 5 categories into an average score. Then, taking the average of those 5 category scores, we scored all the cities and ranked the scores accordingly.

Our analysis was limited to the largest American metropolitan areas. We include all with populations greater than 250K residents, limited to the 78 largest.

Note: We excluded Boise, ID and Louisville, KY for lack of access to the walk and bike scores.

The walk and bike scores were sourced from WalkScore.com.

*2021 County Health Rankings Data. Using city size and population we estimate a proportion measurement for all associated data. This approximate score is attributed to the city in question.