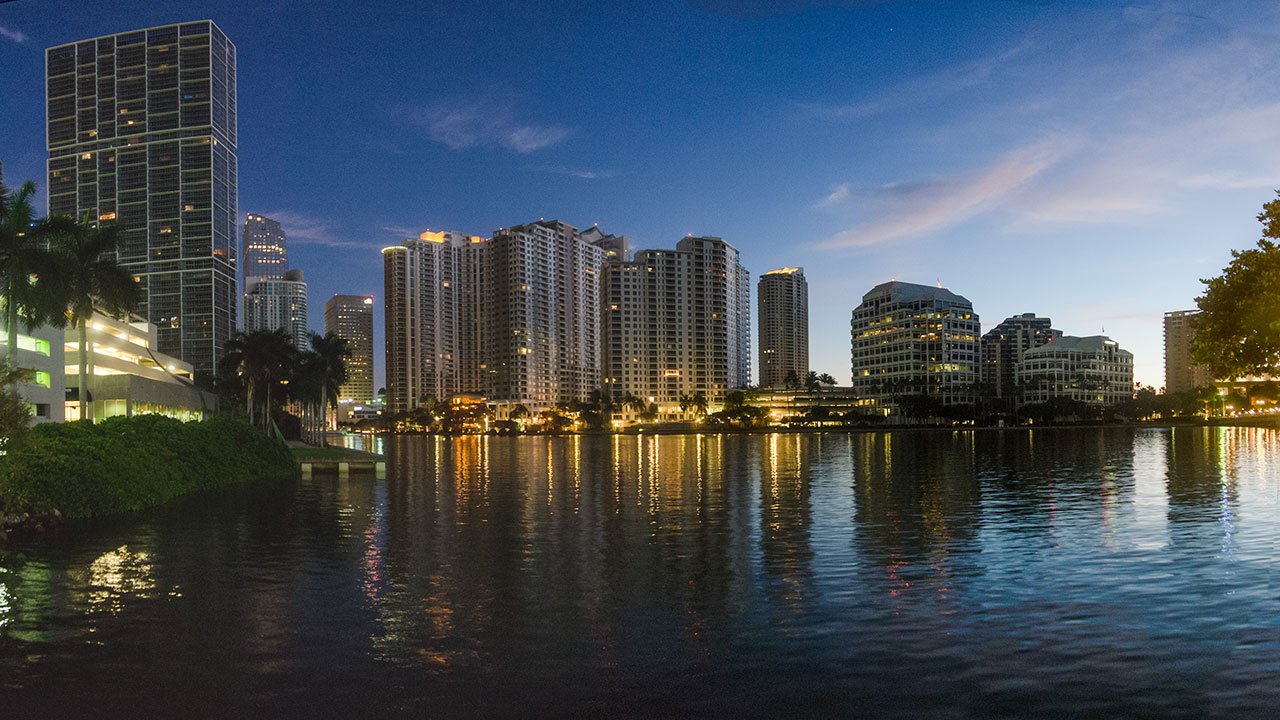 Miami is a major hub of all things interesting: finance, media, entertainment, and trade. It’s a famously clean city and home to South Beach, the bikini capital of the world.

Being the only US city to act as an Art Basel host, Miami also boasts a stunning design district with art deco-inspired architecture.

It’s also the center of Cuban-American heritage, and has been called the “Capital of Latin America”. This Florida city is known for being a “melting pot” with many cultural influences from its the Caribbean, Haitian and Hispanic residents.

Miami has a lot to offer but it can be an intimidating city if you don’t know your way around. Lucky for you, we’re here to help!

Now, in the words of Will Smith, Welcome to Miami!

And if you’re looking for more info on moving to Miami, check out our Miami move cost guide.

Here’s a drone tour of the city to help you get your bearings.

Okay, now that you’re sold on moving to Miami, let’s talk about where to live.

First thing’s first: set a budget. I’ll give you a minute, so take your time.

Check out some rental prices around different neighborhoods between Miami and Miami Beach. The further from the coast you’ll find new and old homes, while coastal Miami offers more high-rises. 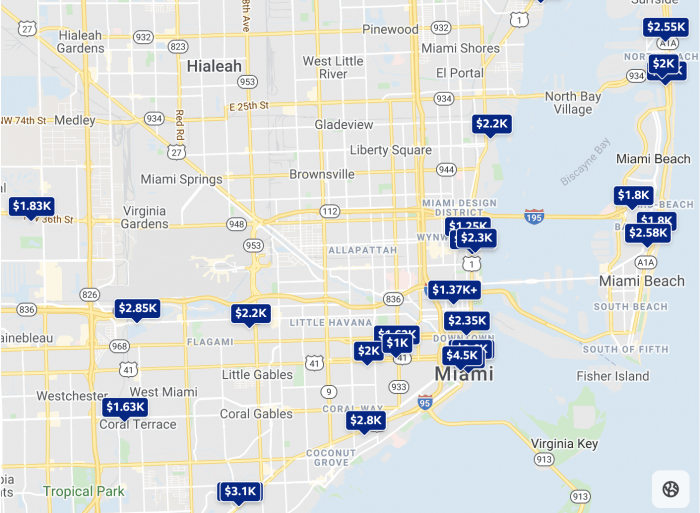 Basically, the rule in Miami, like in most other coastal cities, is that the closer your house is to the water the higher the cost of living will be. That’s the price you pay for South Florida real estate! 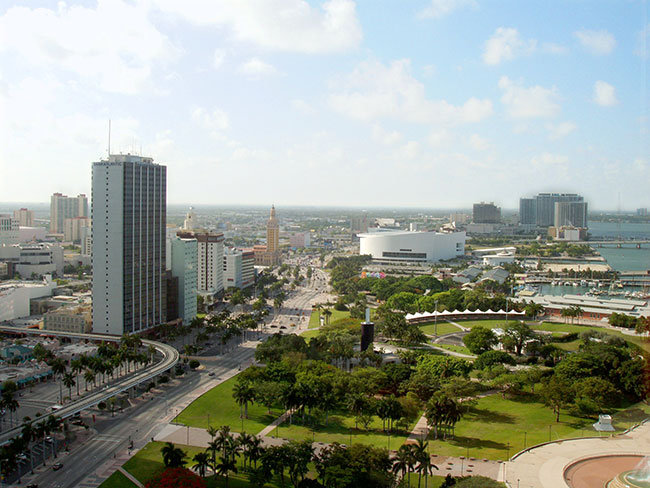 So let’s get this out of the way now: if you’re on a tight budget, look to Miami Lakes, North Miami, or Little Havana. If cost is no object, look to Brickell, Miami Beach, or Key Biscayne.

We all want to live near people who are at similar points in their lives and the website Esri.com does an amazing job breaking down city demographics by zip code with their ziptapestry tool. 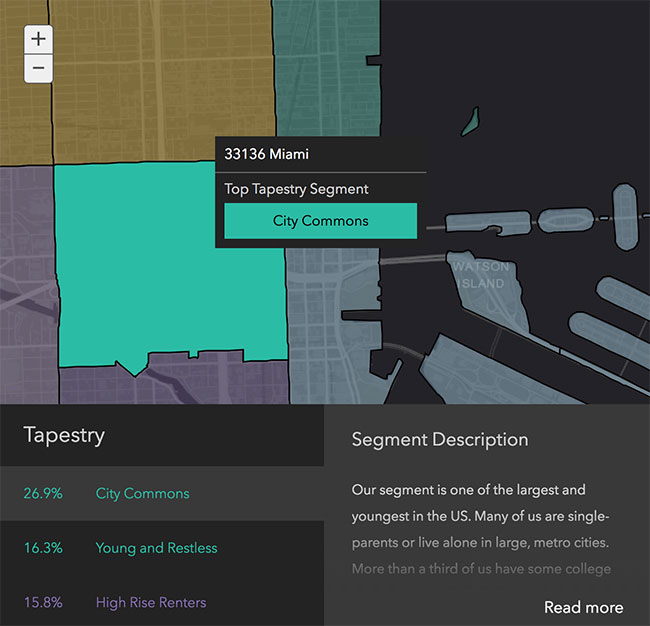 For example, if you plug Downtown Miami (33136) into the tool you’ll get a full breakdown of the primary types of people living in that area. It’s that easy!<

Okay, now that you’ve found the best neighborhoods for you, you need to make sure it’s close enough to where you work and play so you aren’t wasting all your time commuting.

If you want to have a car…

Miami is definitely accessible by car. This site does a great job of breaking down car costs associated with living in Miami like gas and insurance.

Like in all big cities, parking can be a real nightmate, but you can purchase parking permits here.

Miami-Dade County runs a public transportation system with a Metrobus, Metrorail, and Metromover. 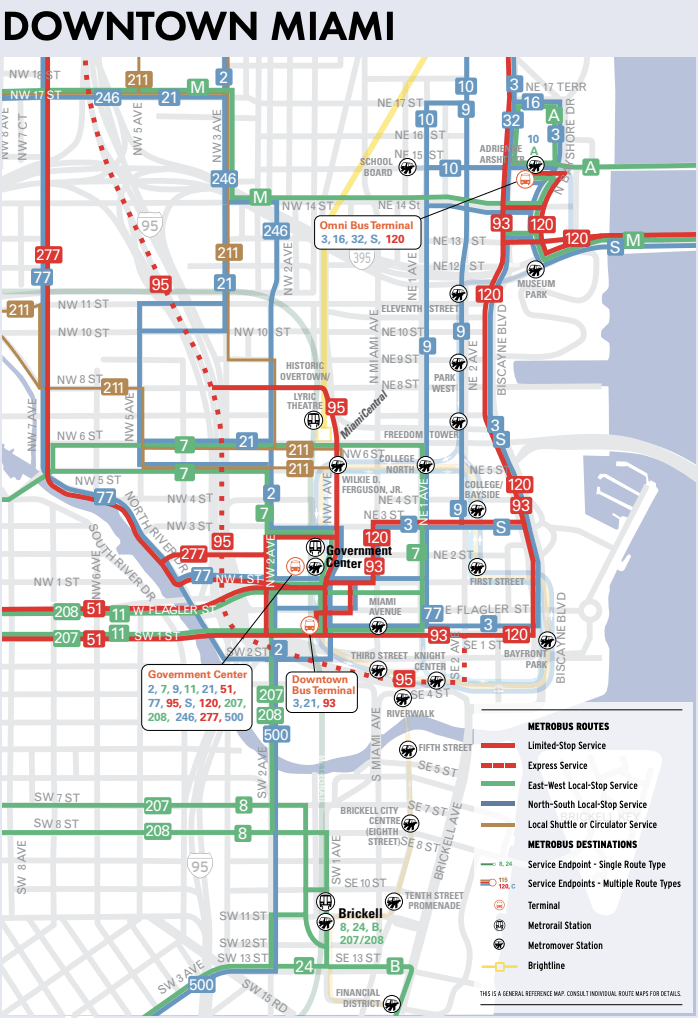 In case you were wondering, the Metromover is a 4.4 mile electric trolley system that runs throughout downtown. This site has trackers for each of the three methods of public transportation.

Bottom line: with a score of 78, Miami’s public transportation system is far above average. It’s about on par with the bike score of 65, so either way you’ll be able to get where you need to go. And speaking of bikes, Miami offers CitiBikes.

In terms of walkability, Miami is amazing! With a walk score of 78, (provided you don’t mind the summer heat) Miami is the 5th most walkable city in the United States.

If you’re in downtown Miami or around places like the Grove and Miami Beach, it’s better to walk than it is to take public transportation or even to bike! 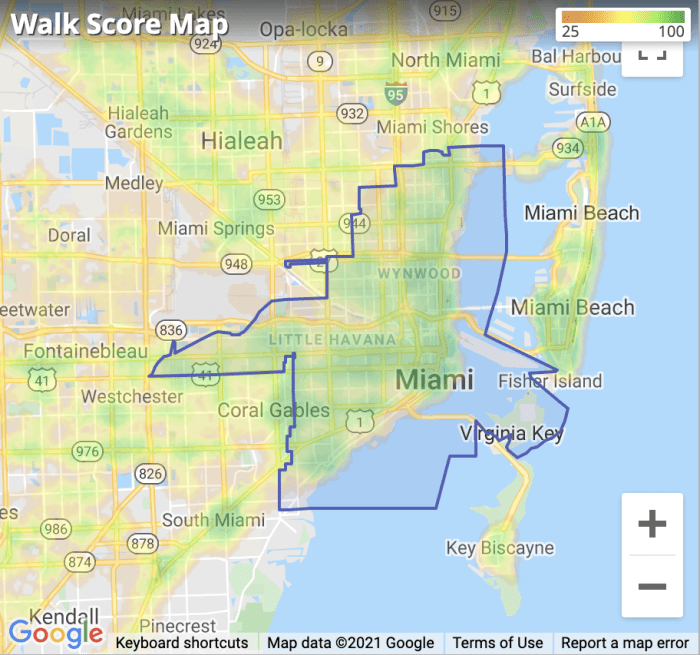 For the Walk Score map,

The greener the better.If you like walking, stay away from the yellow when looking for neighborhoods to live in.

Bottom line: while the city is very walkable, most Miamians suggest having a car for convenience’s sake. On a hot summer day, car air conditioning can be the difference between you leaving your house or not.

The city of Miami is great to live in for many reasons, but safety is not one of them. Miami has more than double the national average in violent crime, property crime, and crimes per square mile. Yeaaaaaah, not good. 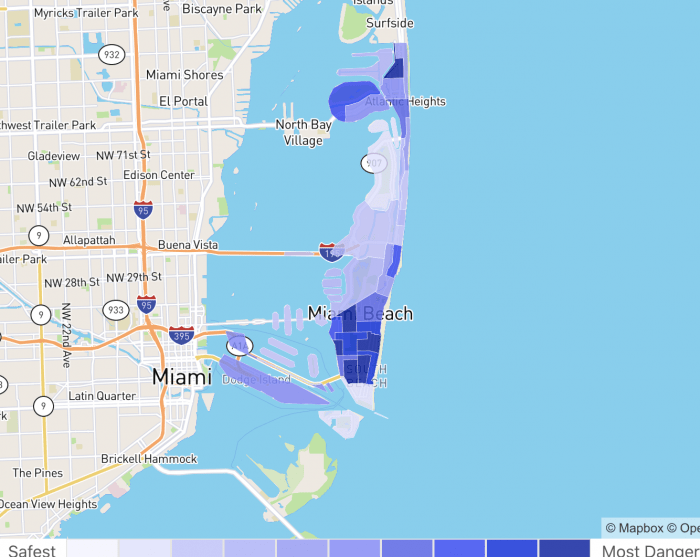 With 100 as the safest rating a city can get, Miami Beach scores a whopping 0. ZERO on the crime index.

Still, the same rules apply here as they do in any major metropolitan area: As long as you know when to avoid the bad areas and where shady stuff is usually going down, you’ll probably be fine.

Also, the Miami Police Department maintains an awesome Crime Mapping website where you can get a better idea on places to avoid.

Before we start looking for apartments, let’s first consider what kind of accommodations you’ll need in Miami.

Must-haves:
It’s no secret that the weather in Miami is absolutely amazing! Miami has what’s known as a “tropical monsoon” climate. 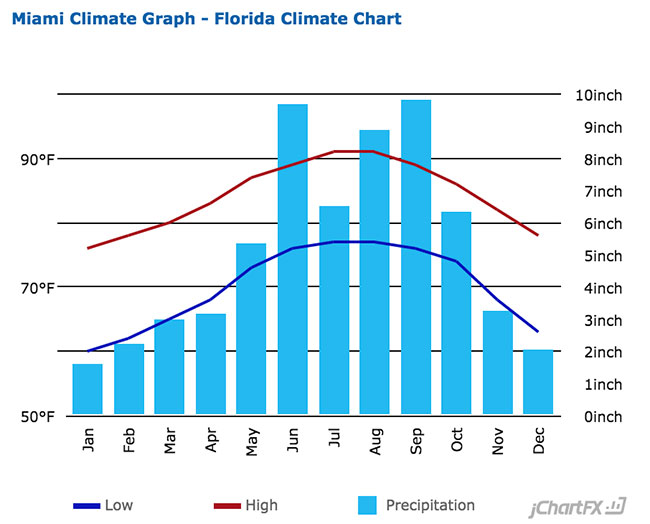 The temperatures in the winter feel a lot like Spring time compared to the rest of the country.

Winters in Miami average around 68 degrees, with extremes ranging from highs of 80 degrees to lows of 50 degrees.

Surprisingly, it doesn’t get that hot during the summer. The average highs in July and August are in the low 90s!

So it’d be good to get an apartment with air conditioning, but heating is not vital.

Also, there are tons of laundromats on Miami Beach and the mainland, but if you’re planning on going without a car, having washer/dryer units would be very convenient.

When setting your apartment budget, you should think about all your utility costs too, like the average cable bill in Miami to make sure you can actually afford everything you need

Where to look for an apartment in Miami

Here are some good websites to find apartments. Use the sort functionality to drill down on your desired number of bedrooms, budget, etc.

It might seem sketchy, but Craigslist is actually a very useful site for finding apartments (especially places whose owners/landlords are desperate to rent out).

Each state has its own unique rental laws and if you don’t know the rules of the game a shiesty landlord just may try and put one over on you.

Do yourself a favor and read a few of these links below.

Miami’s rental market trends are a bit better than the rest of the country.

This means that Miami’s market is slightly better than the national average. Still, in a city of this size, keep in mind that your experience will vary depending on which area of the city you’re looking at. 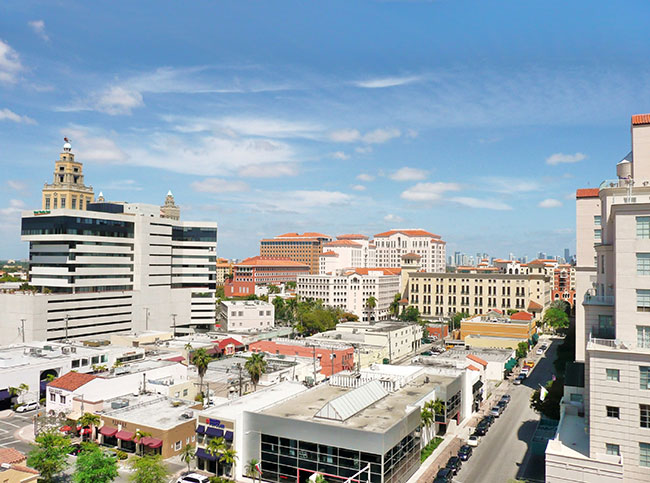 Coral Gables may be a bit pricey, but it’s absolutely packed with amenities.

This suburb is located a convenient 6 miles from Miami proper and boasts great golf courses, gardens, art installations, and high-end shopping. Still, these perks come at a housing cost of $952,291, the average for this year.

Doral is one of Miami’s nicest suburbs. It’s a 17 mile straight shot drive from Miami Beach past Miami’s airport. 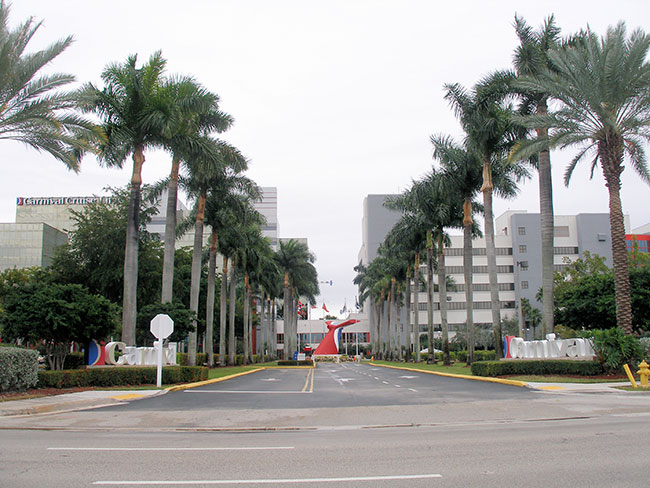 Doral has tons of shops, businesses, and has a bustling import/export industry because of its proximity to the airport. It also boasts a more reasonable average housing cost of $382,361.

You can look for places to live in Doral here.

If you want to get an idea on the cost of different moving services, check out our moving costs calculator.

Like we talked about earlier, Miami has extremely nice weather all year round. Having said that, hurricane season runs from June-November, so you may run into some storms if you try moving during the summer or fall.

For those currently interviewing moving companies, learn more about how to find a great mover here. 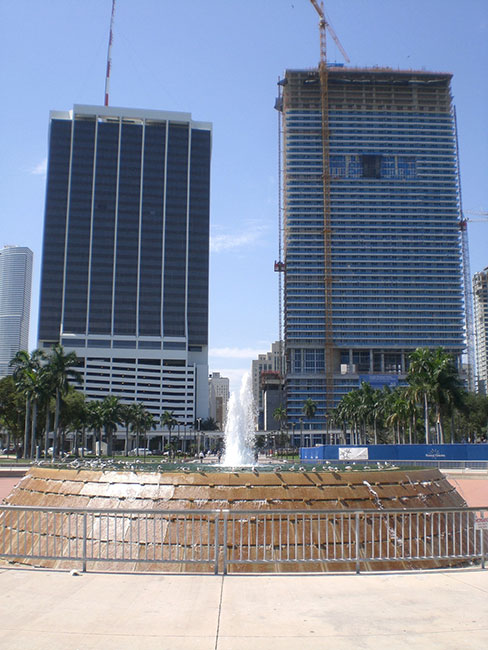 Bayfront Park is a 32-acre public park in Downtown Miami right on Biscayne Bay. You can think of it as Miami’s Central Park. Every year in March Bayfront Park hosts the Ultra Music Festival, which is one of the greatest, wildest music festivals in the world.

And then, of course, there’s Miami Beach. It’s one of the premier sunbathing and tanning locales in the entire world, and the water never dips below 70 degrees. Not a bad lifestyle in our book!

To quote Rihanna, “baby, this is what you came for.” What Miami might lack in snow and safety it makes up for in DJs, dancing, and oontz oontz oontz. 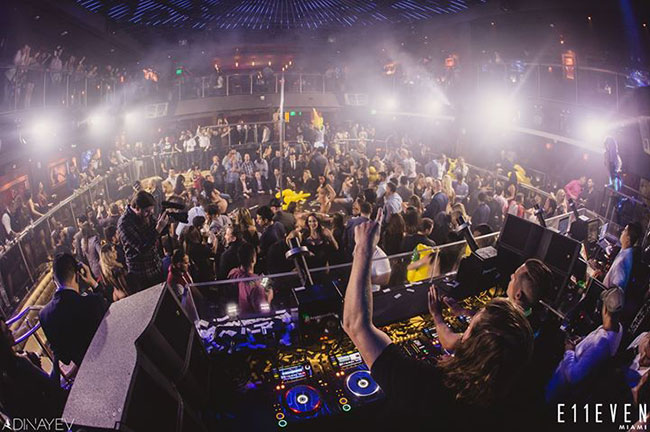 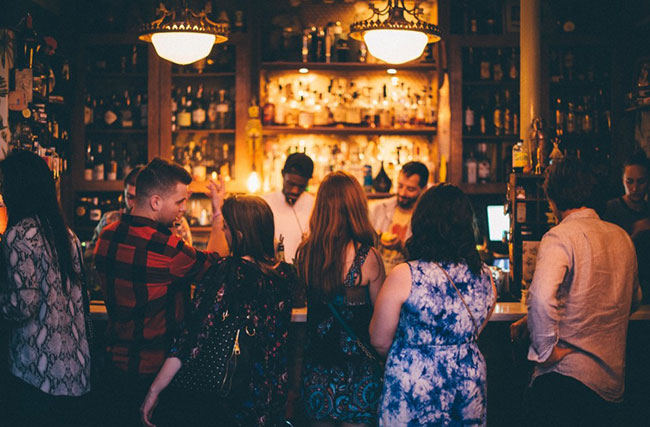