Thinking about making the move across the entire United States?

We don’t blame you.

There are so many reasons Florida is the #1 state that Americans are moving to.

Before you start sun soaking in the beautiful Floridian beaches, you’ll need to know how much it costs to move there.

In this article, we will talk about how much it costs to move from California to Florida as well as why people are moving there and other moving insights that will be super useful to anyone thinking about making this long-distance move.

But I know you’re specifically wondering how much this cross-country move will cost. Here’s a quick answer.

Quick Answer: The average moving cost from California to Florida is from $3,600-$6,300 depending on the size, route, distance, and timing of the move. Hiring a professional moving company will be on the more expensive side. Renting a truck or using a moving container will save you money but also require a lot more work.

Before going much further, use these helpful resources:

*Estimate includes fuel cost but no other costs associated such as lodging, tolls, or parking.

What are the best California to Florida movers?

Why Do the Prices Vary So Much?

The moving estimates have ranges because every move is different. There are certain things you can do to make your move cheaper as well as things that will make your move far more expensive than it could be. Understand the following factors to get the lowest moving quotes possible.

The net domestic migration (people moving to a state minus people moving from a state) of Florida is the highest in the country! From 2017 to 2018, The population of Florida grew by 132,602 people. This doesn’t even include the people who moved from other countries.

On the opposite end of the spectrum, only New York had a lower net domestic migration. From 2017 to 2018, California lost a net total of 156,068 residents to other states.

Since a lower demand means a higher supply, if you are moving from Florida to California, you may score a move at the low end of the range.

Moving companies will be glad to take your business because that would make their trip to California profitable. This actually would give you negotiation power with moving companies.

Moving is a very seasonal industry. Most Americans move during the summer.

What does this mean? Similarly to the principle of inbound vs outbound demand, moving during the peak season means moving companies charge higher.

Just as an example, a 3-bedroom move during July 4th weekend (a notoriously busy moving day) starts at over $6,000.

If you’re planning on arriving at your new home in the summer, book your move as soon as possible.

Although summer is the moving peak season, everywhere has it’s particularities to look out for. Florida happens to be the state most vulnerable to hurricanes and hurricane season does fall in the summer months.

Needless to say, you’ll want to avoid moving during a tropical storm. Be aware of the climate and make sure you understand your moving company’s policies on cancellations and rescheduling.

Get A Free Quote

To get a true idea of what your move should cost, you need to get personalized moving quotes from long-distance moving companies. Some factors may be out of your control but a reputable moving company will tell you what is bringing your costs up and you can adjust accordingly.

Although Florida is the sunshine state, California actually gets more average yearly sunshine. This isn’t why Californians are moving there. Here’s why.

The two states have some very obvious similarities.

While familiarities might make it easier for people to move somewhere, you wouldn’t move somewhere that’s exactly the same. Here are some of the main differences:

The big one. According to Expatistan, the cost of living in Orlando, FL is 21% cheaper than in Los Angeles, CA.

This figure only gets crazier when you talk about real estate. According to Zillow, the median home value in California is $571,875. Compare that to Florida with $299,000. That’s a 52% difference. Insane!

Lower housing and a general cost of living won’t be the only way that you’ll save money. 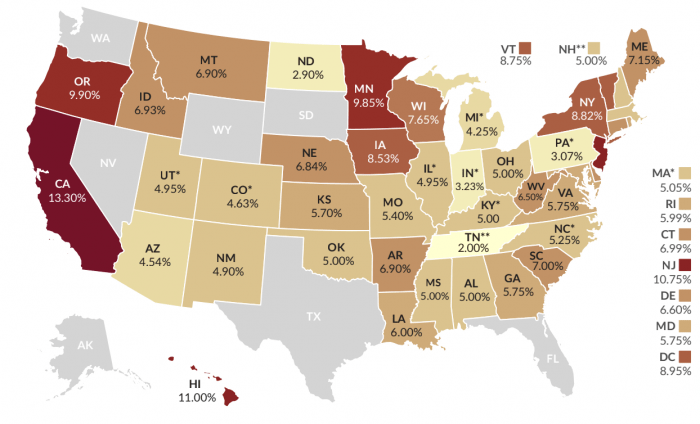 Map by The Tax Foundation

If that wasn’t enough, the average sales tax in California is 8.37% compared to Florida’s average of 7.05%.

Average property taxes are higher in Florida however, so there is a point for California.

While not many people are leaving California because it’s too cold or not sunny enough, Californians seem to be willing to put up with the humidity of Florida for the familiarity of mild winters and sunny days.

What are the best places to move to in Florida?

In no particular order, these are some of the places that Americans most enjoy moving to in Florida.

Orlando is a good option to move to if you’re seeking a city where you’ll never suffer from a shortage of things to do. Orlando was built to be a destination and that it has become.

Like Southern California, South Florida is where the diversity is. Miami is truly a global city with world-famous beaches like South Beach and nearby Palm Beach. This melting pot of cultures that will always keep things interesting. Check out our Miami relocation guide for more details and recommendations.

Tampa Bay is home to some of the most truly beautiful beaches in the country. It’s somehow simultaneously, a retiree hotspot, a party area, a classy beach destination, full of southern charm, and urban development. Not many places have it all the way Tampa Bay does.

Clearwater, St. Petersburg and the nearby Siesta Key in the Sarasota Bay are highlight towns to move to. For more information about moving to Tampa, see our “Moving to Tampa” guide.

Many are surprised to learn that Jacksonville is actually over twice as big as any other city in Florida. This sprawling city offers housing below the states’ average with everything urban cities have to offer. Consider the historic St. Augustine to the south as well. The oldest city in the country! See our moving guide to Jacksonville for more information and tips.