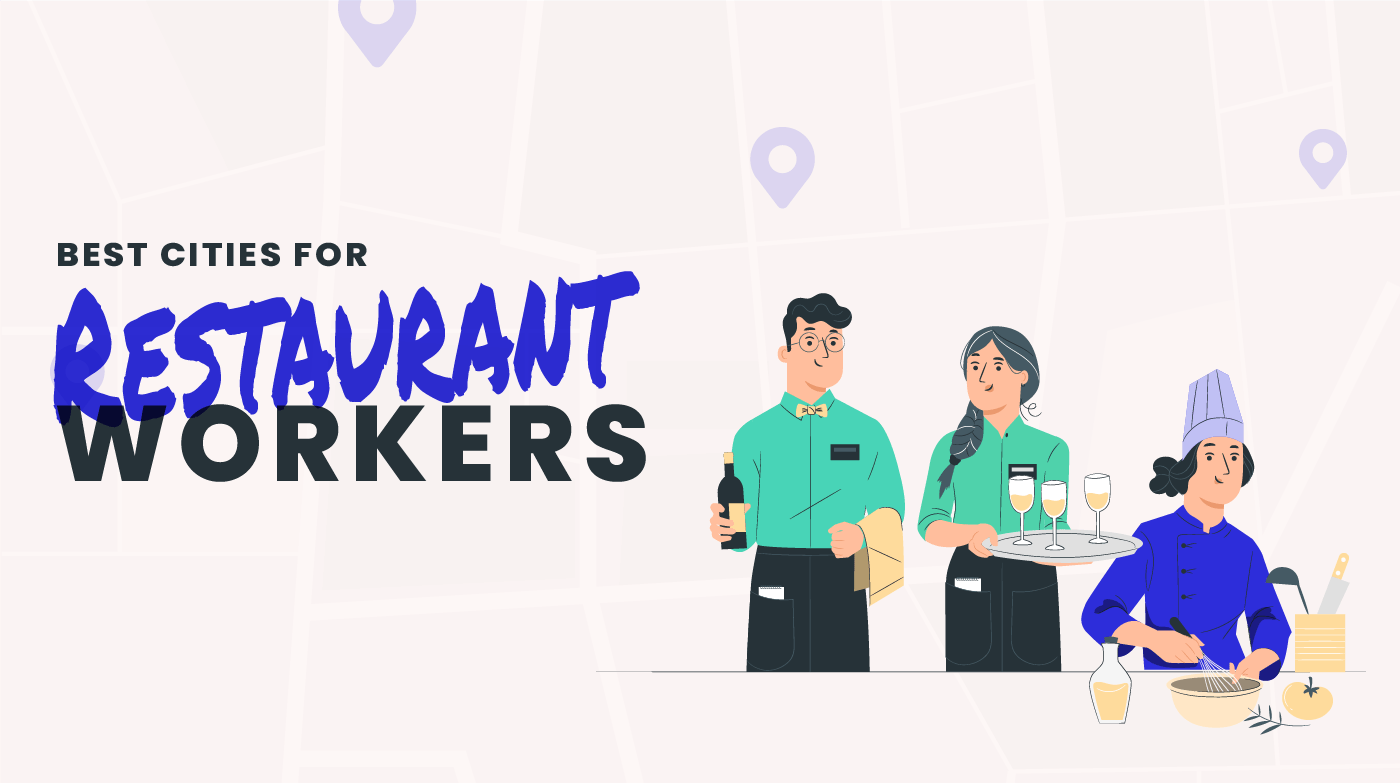 As the pandemic caused shutdowns across the nation, one industry was hit particularly hard: food service.

By May 2020, 5.9 million food service jobs were lost within a span of just six weeks. Despite furloughs and government aid, and the push for delivery services and take-out, countless mom-and-pop shops closed their doors (often for good). Even established chains felt the reverberations as they laid off thousands of employees.

Now, as the nation rebounds, the restaurant industry has turned a new corner and is seeing floods of customers eager to eat out. This should be good news for businesses, but the reality of stepping back into a low-wage, exhausting, job with an elevated risk of COVID-19 exposure is leading to a significant shortage of workers.

The federal government minimum hourly wage for tipped employees is $2.13/hour. 15 states have not made adjustments to these wages, while some 24 others have alternative cash wages that are still considerably lower than the standard minimum wage of $7.25. Restaurant workers in these positions often work long, laborious shifts and are reliant on tips, meaning their fluctuating wages lack consistency.

As food industry giants like McDonald’s, Chipotle, and Starbucks announce wage increases, it is becoming clear that the rest of the industry must keep up to stay viable.

Where can restaurant workers expect to find a plethora of food service jobs, higher wages, and a low cost of living? We’ve ranked all U.S. metros to find the best conditions for working in a restaurant as a cook, server, or host.

We’ve also got all you need for planning your next move, all for free. Try our moving cost calculator or check out our top suggestions for the best moving companies, small and international.

Restaurant Workers, go west! (Even as far west as Hawaii)

Hawaii is home to magnificent beaches, beautiful weather, and two of the top metro areas for restaurant workers: Kahului-Wailuku-Lahaina (#1) and Honolulu (#3). These two cities have the highest mean hourly wages, both offering more than $15-an-hour.

However, the cost of living is exceptionally high in Hawaii (some sources suggest locals need hourly wages between $25-38/hr). For those landing the best jobs, the 90th percentile of cooks, servers, and hosts can earn wages anywhere from $22.84-$48.10. If you can score one of these top-tier positions, the higher wages and beautiful scenery make a compelling case. NOTE: As of 8/25/21 restaurant and bar capacity has been reduced to 50% – Tier 1 Restrictions.

Along the West Coast, cities from Arizona, along the California coast, and all the way up to the tip-top of Washington state offer great job opportunities for those in the restaurant business.

Flagstaff, Arizona comes in the #2 spot. Typically known for its hiking and craft brews, the food scene here is also thriving and the food service jobs are plentiful. To add to this, Flagstaff has a cost of living right on par with the national average (the real value of $100 in Flagstaff is $100.70) and the mean hourly wage sits at a fair $12.59.

9 metropolitan areas in Washington state make the list. Earning ability in these cities is typically higher, indicating a better work/life balance. For instance, restaurant staff in one of these cities would have to work an average of 7.05 hours to earn $100, whereas the national average is 10 hours.

A few outliers show up in the top 25 cities for restaurant workers. These include a couple of vacation spots along the Florida coastline, the Carolinas’ Myrtle Beach metropolitan area, and New York’s Glen Falls nestled in the Adirondack Mountains.

Metros with the Most Jobs: Seattle, Honolulu, Myrtle Beach, Tucson

While the location quotient figure from the Bureau of Labor Statistics gives a proportional count of the area jobs compared to the nation as a whole, city size will often determine how many jobs are actually available.

This table highlights the cities with the greatest volume of restaurant industry jobs, such as #13 Seattle-Tacoma-Bellevue, WA metropolitan area with an estimated 41,040 jobs for cooks, wait staff, and hosts in the restaurant industry. One bonus for those who choose to work in Washington state is that tipped employees have minimum wages set at $13.69.

Top-ranking Honolulu (#3) also has a large number of jobs available. However, both the Seattle area and Urban Honolulu have considerably higher costs of living with the real value of $100 falling in the $80s.

In contrast, Tucson, AZ (#23) and Myrtle Beach, SC (#15) both have over 10K each in total number of area restaurant jobs while at the same time offering a more affordable area cost of living. In fact, these two cities have the strongest dollar power of all the cities in the top 25. The real value of $100 in Myrtle Beach is $108.46 and in Tucson, it’s $107.41.

Depending on your trade or the type of job you are seeking, it may be helpful to see which cities offer the best opportunity for your particular expertise.

For instance, a waiter looking for a job in Olympia, WA might have a harder time finding a job than a restaurant cook since the proportion of area waiter (server) jobs is lower than the national average (0.78 LQ) whereas for cooks the ratio is higher (1.16).

To understand where the best cities for a variety of restaurant workers are located, we used employment data from the Bureau of Labor Statistics for Restaurant Cooks, Waiters and Waitresses, and Hosts and Hostesses. Our analysis included a total of 318 Metropolitan Statistical Areas (MSA) across the United States.

Job Opportunity: To understand the likelihood of finding a restaurant job in any given area we use the Bureau of Labor Statistics Location Quotient (LQ). This provides insight into the relative number of jobs in a certain field in any given metropolitan area compared to the national average. This means an LQ of 1 indicates an average proportion of jobs, whereas an LQ of 2 indicates there are proportionally 2x more jobs in the area. Here’s a quick explanation. We award areas with proportionally higher jobs. (Weight: 1x)

Earning Score: We awarded MSAs with the highest Mean Hourly Wages to highlight cities where restaurant workers earn more. Our scoring system gave double weight to this metric to emphasize the importance of fair wages for restaurant workers. (Weight: 2x)

Affordability: Using regional price parities as evaluated by the Bureau of Economic Analysis we are able to predict area affordability. Price parities are based on a number of cost-of-living factors including housing, food, transportation, and education. To make this more comprehensive we’ve converted this value to a real value of $100.

To understand this better, in Honolulu, HI the Real Value of $100 is $80.78. This means that goods that typically cost $80.78 in other cities will cost $100 in Honolulu.  This indicates a higher cost of living. The inverse also applies: in cities with a Real Value of $100 that is greater than $100, the regional dollar value is stronger and the cost of living is lower. (Weight: 1x)

We collected our data from the Bureau of Labors Statistics, the US Census Bureau, and the Bureau for Economic Analysis. It’s important to note that the data for this study uses figures from 2019.