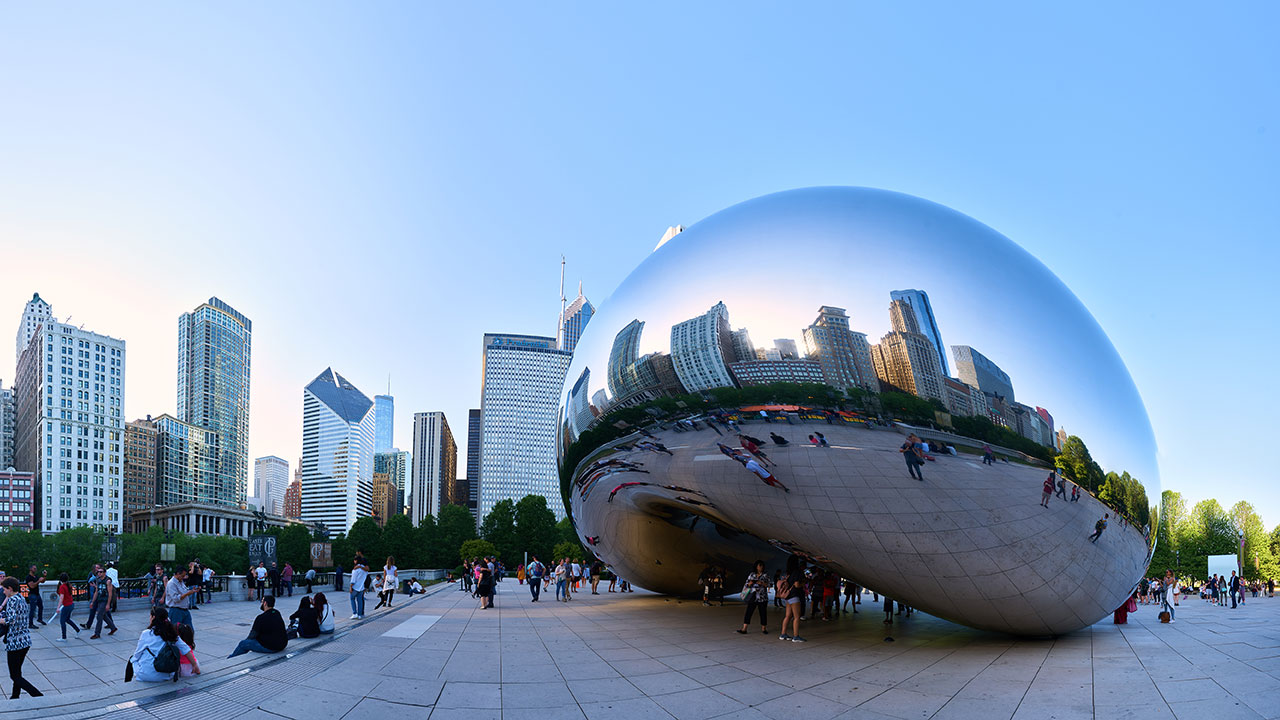 Chicago is the 3rd highest populated in the United States which means there’s going to be a lot of fluidity when it comes to the city’s population.

In order to paint a picture of who’s moving to Chicago, we’ve examined our data on long-distance moves and combined it with data from the U.S. Census Bureau to determine where new Chicago residents come from and where the ones leaving go.

According to the Census, the population of Chicago only increased by 0.3% between 2010 and 2016, but that doesn’t mean there wasn’t a significant amount of migration… 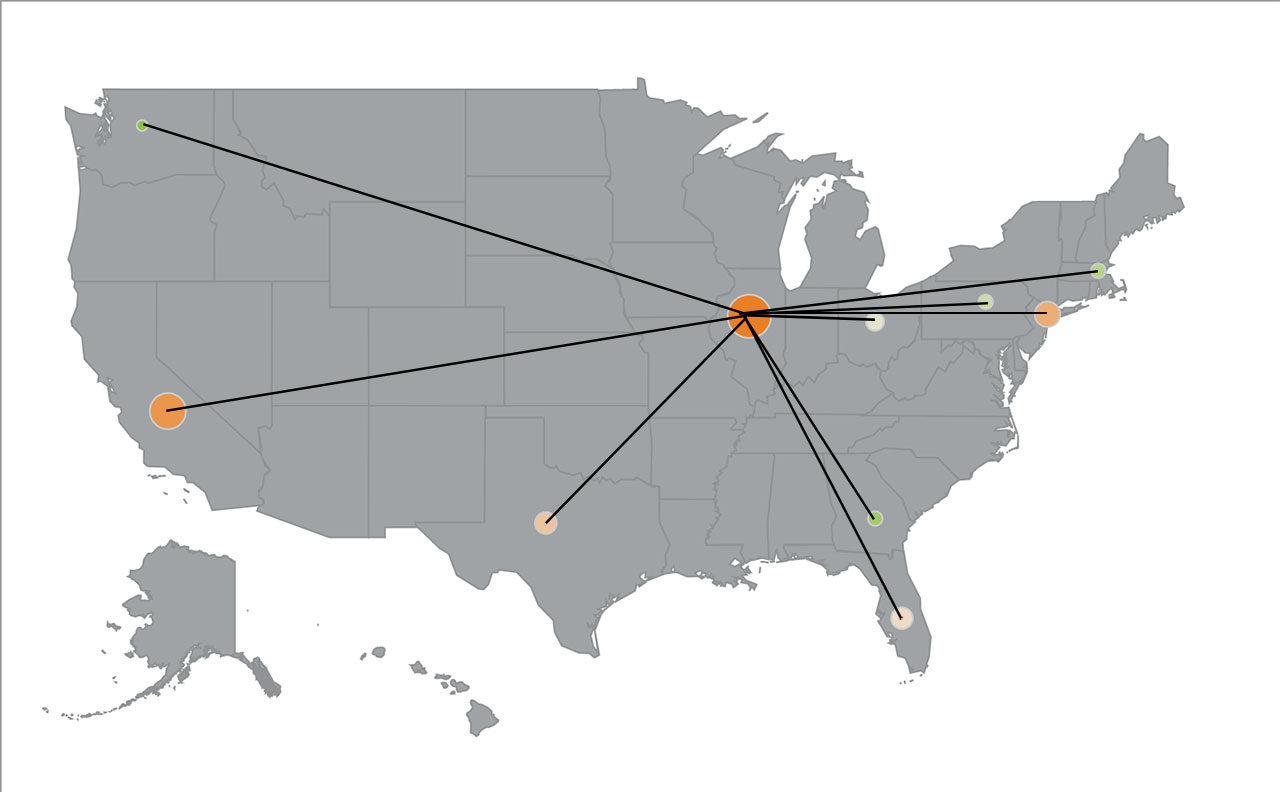 Thinking about moving into or out of Chicago? Take a look at the best Chicago moving companies.

The map pretty well shows that Chicago is a preferred Midwestern alternative to the higher populated states on the East and West coasts.

Like many major metropolitan areas, Chicago attracts a lot of people from its own state of Illinois.

Where are people moving to Chicago coming from?

A lot of the cities in Chicago’s top ten are located in the states most people are coming from, but there are a few interesting outliers. 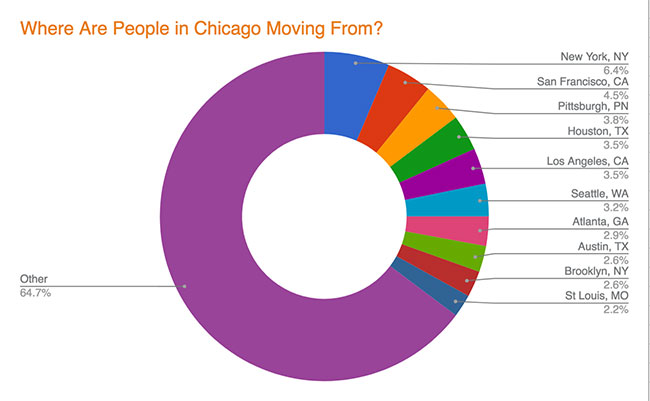 On this list, you’ll find the three of the country’s other highest populated cities in New York, San Francisco, and Houston.

The big outlier here are the inclusion of Saint Louis, whose state isn’t in the top ten but is likely this high up due to proximity to Chicago.

It’s also noteworthy that while Florida, Ohio, and Massachusetts are all on the top ten states list, no cities from each of these states show up here.

Where are people leaving Chicago going?

The 2010-2016 change in Chicago’s population only amounted to a 0.4% increase which means they lost almost as many people as they gained. So, let’s take a look at exactly where Chicago residents are moving to. 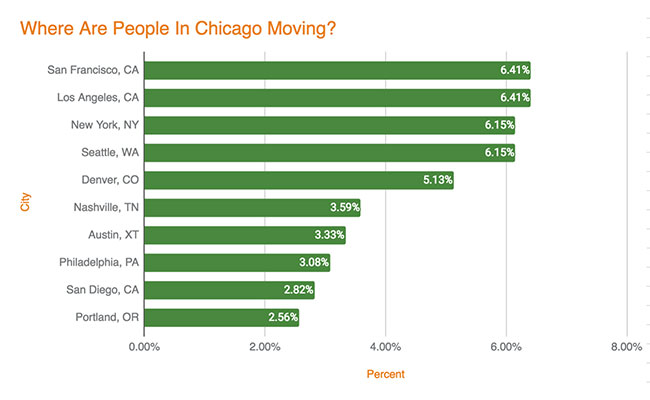 Top 10 Cities People In Chicago Are Moving To 2018

When it comes to people moving out of Chicago, you’ll find the majority heading towards the cities on the coasts.

Obviously, a city this big is going to be trading a lot of people with other major areas like New York and San Francisco.

Denver and Portland are also getting some attention, as they’re somewhat smaller cities but both on the rise.

But what does all this mean?

There’s a lot of overlap between the places people in Chicago are coming from and the cities they’re going. Since the data is so similar, it’s interesting to examine what the net losses and gains of each city actually are. 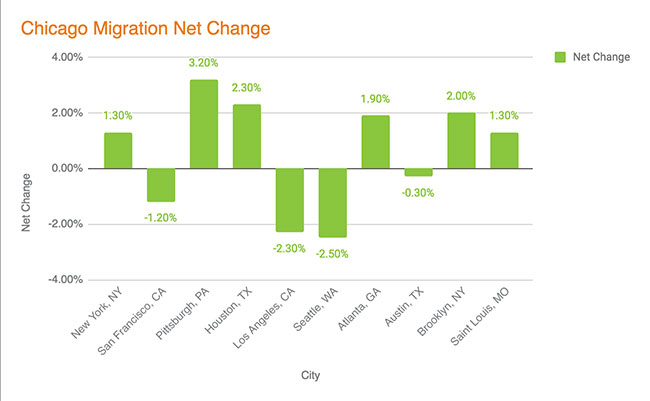 As you can see, Chicago is gaining more people than it’s losing.

Overall, more people are moving to California than are moving from it.

Whether you’re moving to Chicago or looking to move away, this information should help give you an idea of where to go and what to expect.

Our Data:
Throughout our years of facilitating long-distance moves, we’ve noticed many trends which might be of not to people trying to get a feel for a new city. Below, you’ll find a breakdown of where people are moving into Philadelphia from and more based on our own data as well as info from the US Census Bureau.