Atlanta is ranked in the top 30 most expensive cities in North America, according to Expatistan.com. Atlanta actually falls in line with national averages–but, compared to the rest of the Southeast, ATL is a bit on the pricey side.

The city also made Forbes’ list of the best places for business and careers. Forbes lists ATL’s median household income at $66,958.

Of course, where you live in Atlanta will change some things–if you’re living in Midtown versus Downtown Atlanta, or farther into suburban Atlanta neighborhoods like Buckhead, you’re going to notice a difference in the average cost of median rent and home prices.

But to get a better idea of just how much it will cost to live in Atlanta, let’s first see how the city stacks up to other major cities in the US.

Comparing Atlanta to other major cities

If we compare Atlanta to other US cities with similarly sized populations, it’s kind of a toss-up.

A note on city comparisons: We used NerdWallet’s cost of living calculator to compare each city.

First of all, we see Atlanta’s right around 6% more expensive than Colorado Springs, Raleigh, and Omaha. 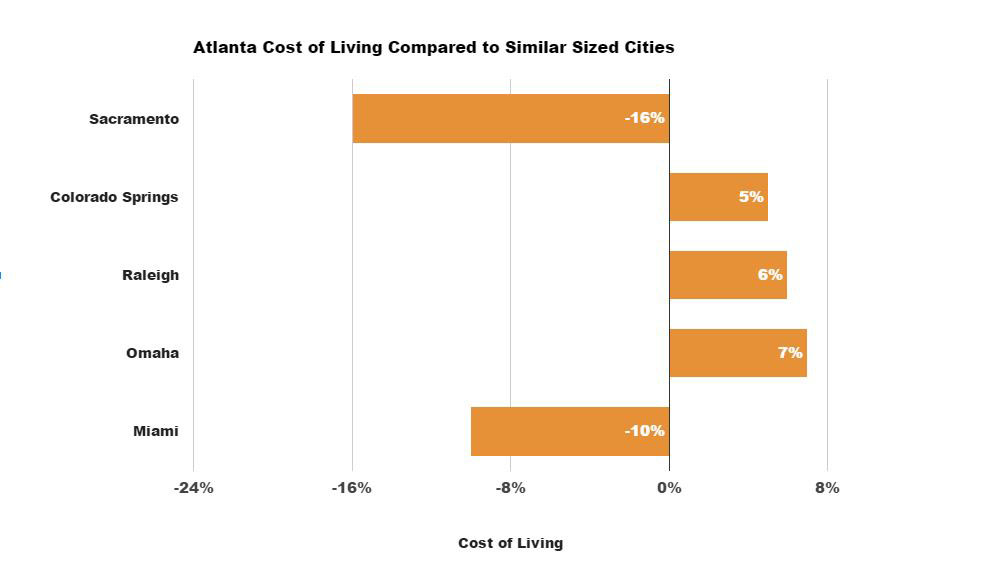 Cost of living in Atlanta, Georgia by expense type

If we look at the cost of living index in Atlanta compared to national averages, according to Payscale.com we see that Atlanta’s actually… pretty average.

The above data comes from Payscale. Forbes puts Atlanta’s cost of living at: “3% above nat’l avg“. Either way, Atlanta’s right around the median.

National averages are one thing, but how does Atlanta compare to the rest of the Southeast?

Comparing Atlanta to nearby major cities

The South has a reputation as generally cheaper than the Northeast or West and Atlanta definitely holds this trend.

But, when you compare ATL to its neighbors, it doesn’t fare quite as well. 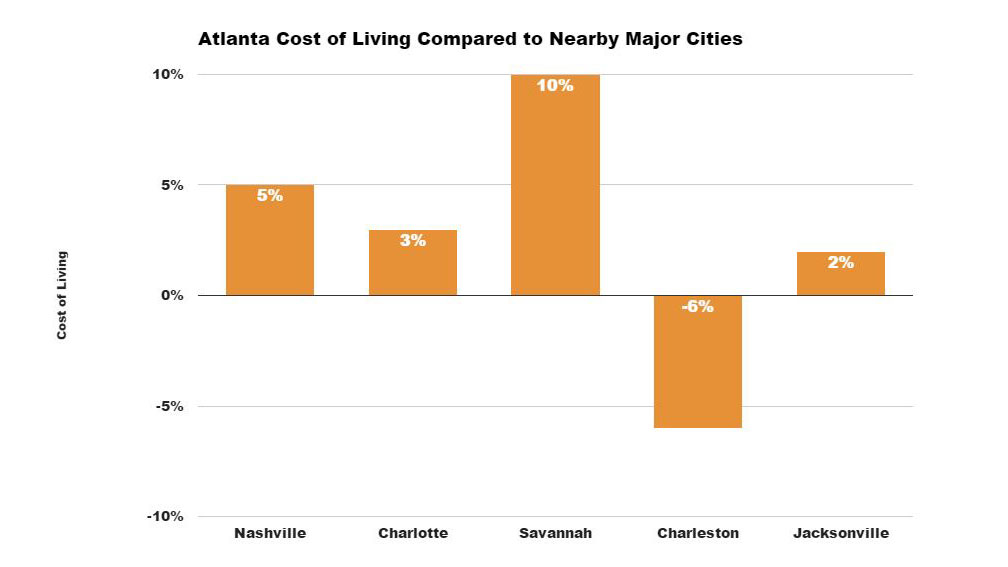 Of the major nearby cities we looked at, Charleston was the only pricier one, costing 6% more than Atlanta.

But, do these cities offer the same global status, booming film industry, and diversity of Atlanta? Here’s looking at you, Hollywood of the South.

For being the 3rd largest metro area in the Southeast, Atlanta ain’t a bad deal.

How much does it cost to live in Atlanta?

Next, let’s look at how much you can expect to pay in monthly costs for the basics in Atlanta. We said basics, so this won’t cover how much you might spend on a fun night out.

Overview: Somewhere around $1211 to $2555 depending on your lifestyle.

Breaking these down to see what each category looks like… 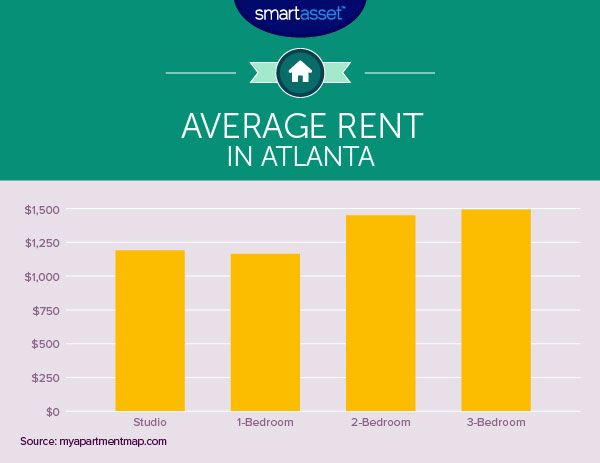 You can probably find places to live that won’t fall in line with the above numbers. On the lower range, be selective. On the higher range, be sure you’re comfortable setting aside a larger part of your income for housing. 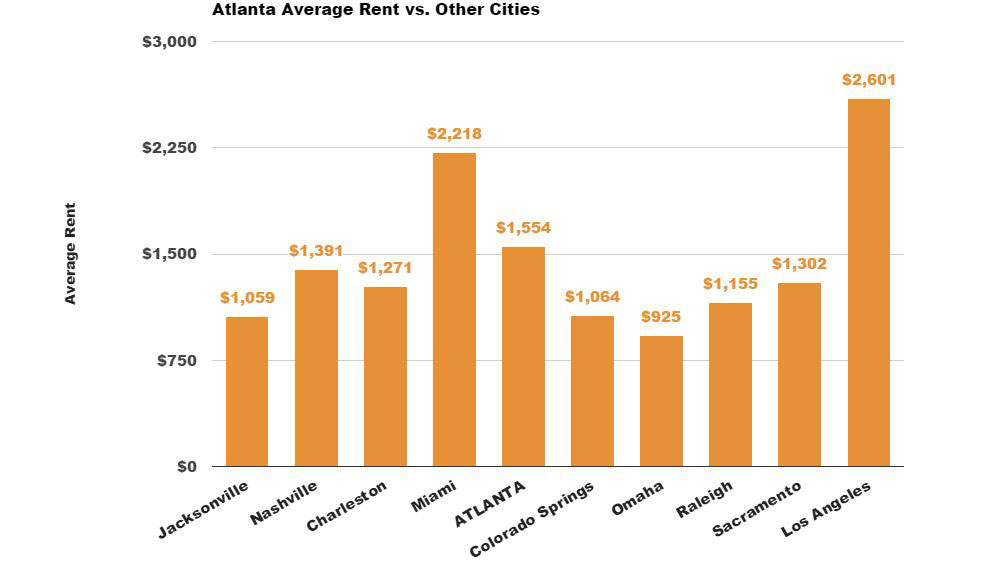 Winters in Atlanta can get cold and have rare snowfall. On the other hand, summers are hot and humid, with temperatures in the 90’s.

So, your AC will be your friend here. Expect to use it throughout the year. The utility bill will reflect that.

Side note – older buildings tend to have worse insulation and may have older AC units. Translation: they could end up costing a lot more in the monthly utility bill. So, ask about this before signing that lease.

Unfortunately, Americans pay more for internet than people in other countries. That’s according to the Verge and PBS.

Internet providers love their bundles, so you can find options ranging from $19.99 up to $80+. Comcast, Earthlink, and Google Fiber are all options, depending on which area you choose.

Let’s look at the Bureau of Labor Statistics report for a minute. 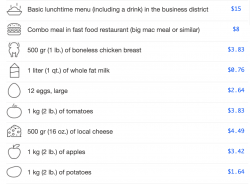 Do keep in mind that this does not account for frequent eating out, which can really increase monthly expenses. Think about tracking the differences in pricing between an inexpensive restaurant like McDonald’s versus a mid-range restaurant or higher.

The Metropolitan Atlanta Rapid Transit Authority (MARTA) will run you $95 for a monthly pass and can get you around a lot of the city. Aside from Public Transit, Ubers and taxis are available in most areas as well, so adjust your transportation methods accordingly based on your commute time.

Only 16.9% of Atlanta households own no vehicle, according to data from Governing.com. Gas prices are usually cheaper than the national average.

Personalizing costs to your situation

Your living situation can really affect living costs. Single versus family, or family of 3 versus family of 5, are differently affected by things like healthcare and childcare costs.

Use MIT’s living wage calculator here to look at estimates for Atlanta’s:

Another great tool for exploring cost of living is the Best Places overview here.

Bottom line: budget anywhere from $1,211 to $2555 to cover your common expenses living in Atlanta.

The State of Georgia’s individual income tax rate maxes out at 5.75% for incomes over $7,000 per year. State sales tax rates are 4%. However, each county can increase that – most are 6-8%, including the 4% default.

Again, if you’re heading South, you will probably pay a bit more in Atlanta than in nearby places.

If you just have to live in a big city, Atlanta’s a great choice for you. It’s hard to beat moving to Atlanta! Few places combine the modern city feel with that good ‘ole southern charm.

For the night owls, check out our Atlanta Nightlife guide, and for the rest of you, we’ve got all the best info on Atlanta Parks all in one place.

And if you’re looking to save some money while moving in Atlanta, be sure to read our Moving in Atlanta Cost guide for some insights on where to find solid, cheap moving services.

More importantly, however, is to ensure that you book a top Atlanta moving company.