In March of 2022, Isabel and her boyfriend moved from San Francisco to New York.

Since their new apartment in Manhattan was about a third the size of their place in California, downsizing was a priority.

Isabel found moveBuddha while searching the internet for long-distance movers. She participated in our Better Moves Project and a first-hand account of her experience using Safeway Moving.

In the end, Isabel chose Safeway for the company’s professionalism and low quote.

With her coast-to-coast move in the rearview mirror, she couldn’t be happier with her decision.

In this post, we’ll take a look at what went well, where improvements could have been made, and share a few helpful moving tips Isabel learned along the way.

Cross-country DIY moves aren’t for everybody.

Since Isabel was more interested in professional service and peace of mind than saving a few bucks, she decided to hire full-service movers.

Because she was starting a new job in Brooklyn and had to find a suitable apartment nearby, timing and logistics were big concerns.

After diligently downsizing their belongings, Isabel and her boyfriend were left with approximately 20 boxes and some miscellaneous furniture that collectively weighed about 2,000 pounds.

They didn’t move any specialty or high-value items like antiques or artwork.

Isabel’s move at a glance

Isabel was impressed with Safeway’s pricing and professionalism

When it came to hiring a full-service mover, Isabel wanted:

That said, she was worried that the movers wouldn’t load her items on the assigned date and that they’d deliver everything to New York later than promised.

In addition to booking flights, Isabel would stay with family while the truck was en route, so good planning was paramount.

Isabel knew about the move for nearly six months, but she didn’t book Safeway Movers until she found a new apartment in New York.

Isabel let her customer service representative at Safeway know that she needed help with packing and unpacking and that the movers would have a few flights of stairs to contend with.

After giving her a verbal quote, Isabel’s representative sent her a formal estimate that included a breakdown of all the costs associated with her move.

Based on 345 cubic feet and 2,400 pounds, Safeways price came in at $5,425. Since it was what she expected, Isabel booked her move almost immediately.

Because the crew would handle the packing, Isabel focused on discarding things movers can’t move and donating items with a little life left in them.

Instead of purchasing additional moving insurance, she opted for Safeway’s basic free valuation. It was a wise choice since nothing got damaged.

As move day drew near, Isabel received multiple emails, phone calls, and texts from Safeway confirming the details of her move. 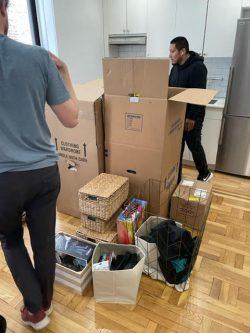 After weeks of planning and communication, it was finally moving day – Sunday, March 20.

That morning Isabel got a call when the crew was on the way. They arrived on time at 10:30 am and immediately put Isabel at ease with their professionalism and attention to detail.

While the movers were hard at work, she relaxed, answered their questions, and said goodbye to family and friends.

It took the crew 2 1/2 hours to pack everything into boxes, and another 45 minutes to load the truck.

Before the crew and truck pulled away, she paid via Zelle. 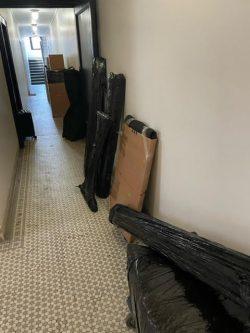 Isabel’s household goods were in transit for 15 days.

Five days before delivery, Safeway called to confirm the delivery date and time.

The truck arrived in New York on Thursday, but Isabel’s flight didn’t land until Friday night. In most other cities this wouldn’t have been a big deal, but New York has strict weekend moving restrictions.

As a result, delivery had to be postponed until the following Monday.

On move-in day, the crew staged Isabel’s items inside the lobby before moving them up to her apartment on the elevator.

Isabel checked everything off the inventory as it came in, and the crew put each item where she wanted it.

in the end, things couldn’t have gone more smoothly.

Isabel’s movers gave her a multi-hour window for when the truck would arrive in the morning. She was told to expect the crew between 8 and 11 am the day before.

She could have run a few errands if the window had been smaller.

She wasn’t thrilled with New York’s ban on weekend moves either, but as they say – you can’t fight city hall.

Lastly, Isabel recommends hiring full-service movers when peace of mind is as important as pricing. For her, it was well worth it.

Want to learn more about Safeway and get a moving quote? Check out these posts: