Ryan and his family moved from Portland, Oregon to Westlake, Ohio in early June 2022.

Ryan considered his options and compared movers for nearly a month before hiring ABF U-Pack to move his household goods and Mr. Car Shipper to transport his vehicle. 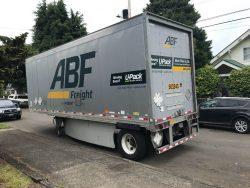 Customers only pay for the space they use, but typically, U-Pack only works for moves over 100 miles. This wasn’t an issue for Ryan because he and his family moved cross-country.

To promote transparency in the moving industry and help anyone considering a move like his, Ryan participated in our Better Moves Project by documenting his experiences with U-Pack and Mr. Car Shipper.

In this post, we’ll look at what went well (spoiler alert: nearly everything did), where improvements could have been made, and whether Ryan would use U-Pack and Mr. Car Shipper again.

Ryan, his wife, and their two kids made the 2,400-mile move to be closer to family and take advantage of Ohio’s low cost of living.

Moving cost calculators are great budgeting tools for cost-conscious families on the move. Keeping expenses low was even more critical for Ryan because he was buying a new home, too. Luckily, his small shipment included miscellaneous furniture and approximately 75 boxes that only weighed about 4,200 pounds. 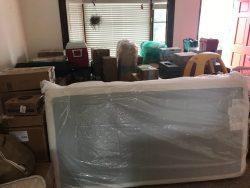 In addition to his family’s comfort and safety, Ryan was concerned that:

Ryan prepared for his move by packing boxes and managing the stress the best he could. 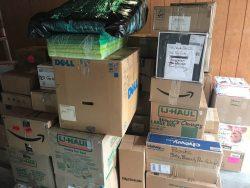 Ryan’s move at a glance

Ryan and his wife relocated to Ohio well before their move date.

In the early going, they relied on moveBuddha and consumeraffairs.com to research options and vet prospective movers.

Ryan initially settled on 1-800-PACK-RAT after the company came through with a low quote of just $5,155. However, he changed his mind after reading in the contract that fuel surcharge and repositioning fees that weren’t included in the estimate could increase his move cost significantly. PACK-RAT’s representative offered to waive or discount some of these fees, but Ryan declined.

U-Pack’s $5,761 quote wasn’t the cheapest, but Ryan was impressed with the company’s solid reputation and the positive reviews he found online.

In addition, Ryan liked that:

Ryan spoke with his insurance agent at Liberty Mutual and learned that his auto and renter’s policy would provide limited coverage while his household goods and car were in transit, so he went with U-Pack’s standard coverage.

Because moving heavy furniture and boxes isn’t Ryan’s idea of a good time, he hired Oregon Trail Movers to load the trailer in Portland. The company quoted Ryan $350 for a three-person crew for two hours. Ryan also hired movers to help with unloading in Ohio.

Ryan got quotes from four container companies and one full-service mover.

Here’s how they stacked up:

He also got these quotes to ship his car:

Prices were higher than Ryan expected because fuel costs had increased since he got his quotes.

Ryan’s service providers contacted him before his move to confirm his reservation dates and details. 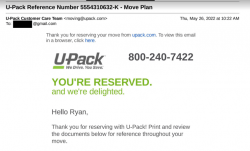 In addition to confirming his move details, Oregon Trail Movers accurately estimated how many moving blankets and cargo straps they’d need on moving day. Since the movers were loading U-Pack’s freight trailer, Ryan was responsible for providing pads, straps, and stretch wrap.

Before move day, Ryan discovered a few drooping power lines while inspecting the truck’s route to get to his home. Luckily, he got the utility company to raise them to at least 14 feet before the U-Pack driver delivered his trailer.

Ryan’s service providers showed up on time on the appointed days.

Ryan wisely scheduled the crew from Oregon Trail Movers for the morning after the container was delivered. This is an excellent idea for hybrid moves because container companies often give customers wide service windows between 8 AM and 5 PM. Coordinating arrival times for two different service providers can be nearly impossible, and nobody wants to pay movers to sit around waiting for a container to arrive at origin or destination.

After sending Ryan a text with his ETA on the morning of May 31, the U-Pack driver arrived and dropped the trailer in front of his home. While the crew was loading, Ryan cleaned the apartment in preparation for the final walk-through with the property management company. Loading took an hour longer than expected, but Ryan couldn’t have been happier with his crew’s friendly demeanor and efficiency.

They put a minor chip in the front door, but the company owner said he’d gladly repair the damage when Ryan called in.

After loading, Ryan was surprised to discover that the logistics tracks in the trailer used for cargo securement were spaced every other foot instead of every foot.

Ryan loved U-Pack’s “pay for what you use” policy. Still, he cautions other customers to take the logistics track spacing into account because he ended up paying slightly more than expected for floor space that he didn’t use. 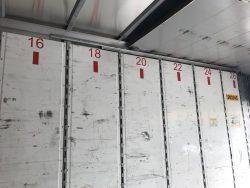 A week out, Mr. Car Shipper confirmed Ryan’s services and dates by phone and email. The company also sent a detailed list to help him prepare his vehicle for transportation. Since Ryan and his family had already left for Ohio, he had a neighbor meet the driver from Diesel Express (Mr. Car Shipper’s partner) on June 6.

The delivery process was nearly perfect

Diesel Auto Express delivered Ryan’s car on time and in good condition just five days after pick-up in Oregon. U-Pack notified Ryan that his trailer had arrived at the local terminal 13 days after loading it in Portland.

However, when Ryan called to schedule the final delivery, U-Pack could only tell him that his trailer would arrive at his new residence between 8 AM and 5 PM. Ryan still hadn’t heard from U-Pack by 4:30, and when he called for an update, he was told that the truck had just left the terminal and would arrive within the hour.

Unfortunately, there were low-wire issues in Westlake, too. Since Ryan couldn’t get the utility company to raise the lines, he had to wait for the truck and lift them himself with a long-arm pool skimmer. We don’t recommend this for obvious reasons, but as they say, you gotta do what you gotta do. 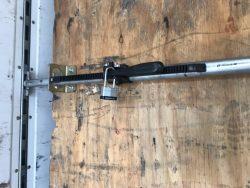 Ryan mowed the lawn while the movers unloaded the trailer.

When it comes to moving, Ryan is one of the lucky ones.

Ryan’s move was about as smooth as they get, but he wasn’t thrilled about:

The verdict – did Ryan’s service providers make the grade? 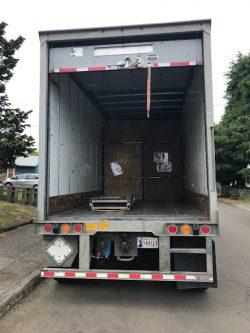 There weren’t any big surprises or epic service failures, and all of Ryan’s quotes were accurate. U-Pack, Mr. Car Shipper, and Oregon Trail Movers delivered positive moving experiences for Ryan and his family. Ryan felt U-Pack’s quote was a bit pricey, but he got his money’s worth in the end.

He’d use each company again and wouldn’t hesitate to recommend them to anyone considering a move like his.

Ryan’s advice for anyone planning a move like his

With his cross-country relocation in the record books, Ryan recommends:

The downsides of freight trailers

Freight trailers are great options for DIY moves of all sizes.

That said, most have spring suspensions that can be tough on household goods. On the other hand, nearly all moving vans have much gentler air-ride suspensions. It’s worth considering this if you’re moving sensitive, fragile, and valuable items.

In addition, U-Pack trailers have deck heights of 48 inches. Trailers come with walk boards, but loading and unloading trailers is more difficult and dangerous than moving containers that rest directly on the ground.