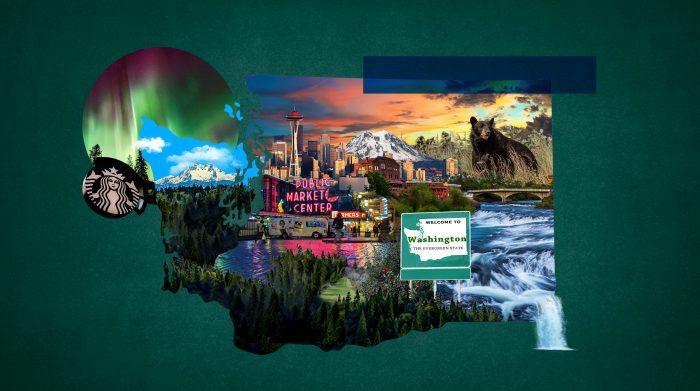 Are moves coming into or heading out of Washington? (Hint: both)

Washington is one of America’s wealthiest and most politically and socially liberal states. The Evergreen State consistently ranks among the best for life expectancy and low unemployment.

According to moveBuddha’s 2022 data (Jan 1 through Sept 5) over 20K searches involving the state of Washington were made via their Moving Cost Calculator. This accounts for 7% of all searches.

Most move-outs come from King County, the most populous county in the state and the home of Seattle. The local government’s lackluster response to homelessness and crime rates, along with skyrocketing housing prices, are the top reasons residents say they’re moving out.

Not all parts of Washington are faring poorly, though – some smaller communities with excellent access to nature are doing well. We dug through the moveBuddha data to find out who’s leaving the Evergreen State, which cities they’re leaving, and where they’re ending up.

I. Washington Moves: Statewide trends from the last decade and into 2022
II. 2022 Forecast: Which Washington cities are surging in popularity and which are losing residents?
III. Real Insights: We asked, why move to Washington?
IV. Sources and Methodology 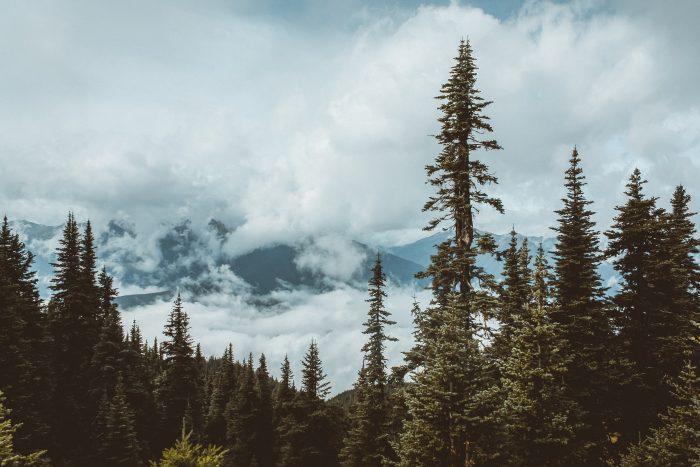 I. Washington Moves, In and Out

Washington is the 13th-most populous U.S. state, but it may soon start losing ground. Population inflow is steadily declining in Washington state, and the latest moveBuddha data in 2022 reveals more moves out than in.

Some factors that could be causing move-outs include:

Unaffordable housing. Washington ranks dead last nationwide in the ratio of housing units to the number of existing households. As a result, housing is much less affordable. Families earning 100% of the area median income can afford a median home in just nine Washington counties.

“Regressive” taxation. The lowest-earning residents in Washington pay nearly 18% of their annual incomes in state and local taxes, while the wealthiest residents pay just 3%. Economists call this taxation approach “regressive,” and it may be enough to make some residents flee.

Rising crime rates. Many parts of the U.S. are dealing with increasing crime rates, but it’s been especially troubling in Washington. Violent crimes and murders increased statewide in 2021 while more police officers have quit and recruits have declined, leading to serious public safety concerns for residents, especially in King County.

Not everything in Washington is so grim, though, and plenty of positive factors are leading people to move there including the easy access to nature, excellent schools, and more.

The state is home to several big corporate employers, especially in the tech industry, such as Microsoft, Boeing, Amazon, and, of course, Starbucks.

Who is moving to Washington and where are Washington residents headed?

Moves into Washington are easily dominated by California inflow; about 1 in 4 moves into The Evergreen State come from The Golden one.

Where are people in Washington moving to?

According to moveBuddha data, California is also a popular destination, followed by Texas, Florida, Illinois, and Arizona. 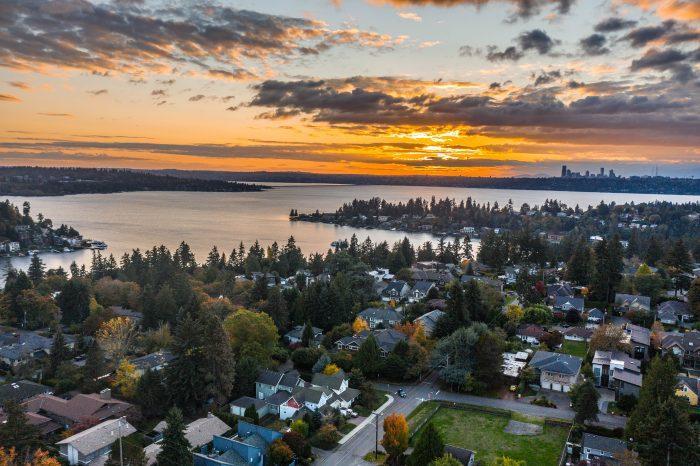 II. 2022 Forecast: Which WA cities are the most popular to move to and out of in 2022, according to moveBuddha data?

Fourteen of the 52 cities we identified in the moveBuddha data are in King County. Most King County residents (55%) expect to move within the next five years. The government’s response to homelessness and rising crime rates are two reasons for move-outs, but so is an exponential rise in housing costs.

Zillow reports that the average home cost in King County is nearly $901,000, an almost 14 percent increase from last year. That figure is considerably higher than the national average home price of $356,000. It also makes King County one of the most expensive housing markets in the U.S., up there with San Diego, San Jose, and Boston.

But it's not just King County, outflow is concentrated around the Seattle Metropolitan Area. Of the 31 cities seeing high outflow, 13 exit cities are in King County, 5 in Snohomish County, and 4 in Pierce County.

So it's no surprise cities in other parts of the state like #1 Port Angeles and #2 Camas are increasing in popularity. moveBuddha data shows these two cities are seeing the highest inflow of all cities in this analysis.

Plus, the average cost of homes across the top 10 Washington cities for inflow falls under the state average.

#1 Port Angeles is an excellent example of this. The average home price there as of August 2022 was about $462,000, about $150K less than the state average. Another top city to move to, #5 Olympia boasts average homes $549,000, according to Zillow data. But for the most bang for your buck, #4 Kennewick and #9 Spokane home values offer the best deal of the top 10 cities to move to.

Top 5 Cities to Move to in Washington: 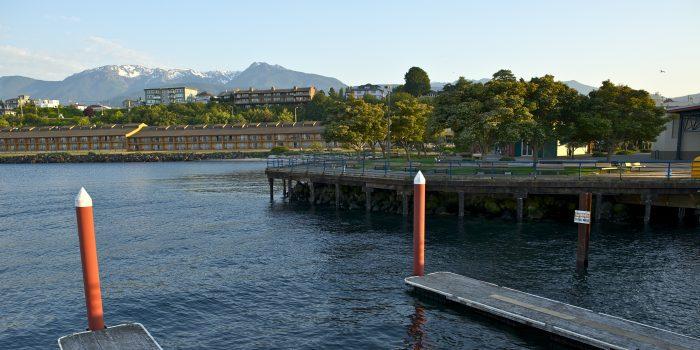 Residents of #1 Port Angeles enjoy an affordable median home price of $462,296. The small city is located on the northern edge of the Olympic Peninsula, and there’s no shortage of opportunities for enjoying nature. Port Angeles is the headquarters of the beautiful Olympic National Park, which encompasses most of the Olympic Mountains. 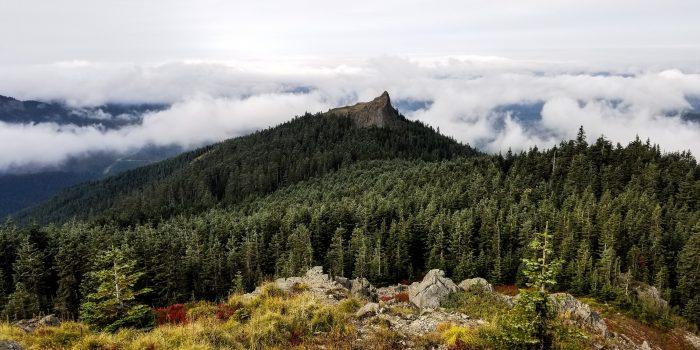 Camas’s housing prices are slightly higher than Port Angeles, but it’s still an attractive destination for movers. Camas is a small, quiet city where the outdoors, parks, and recreation are a big part of the community’s lifestyle. Downtown Camas is charming, a highly walkable district with tree-lined streets and thriving local businesses. Plus, nearby Silver Star Mountain offers amazing views for those up to the hike. 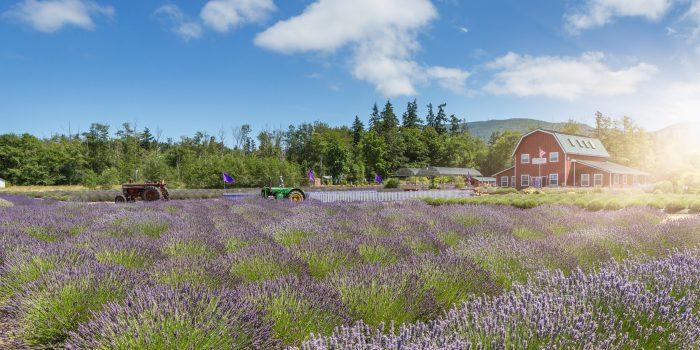 With a 2021 U.S. census population of just 8,241, there are plenty of opportunities for peace and quiet in Sequim. The small city lies within a “rain shadow,” meaning it receives less than 16 inches of rain per year on average. The city is also known for the commercial cultivation of lavender, making it the “Lavender Capital of North America,” a soothing and healing place to escape. 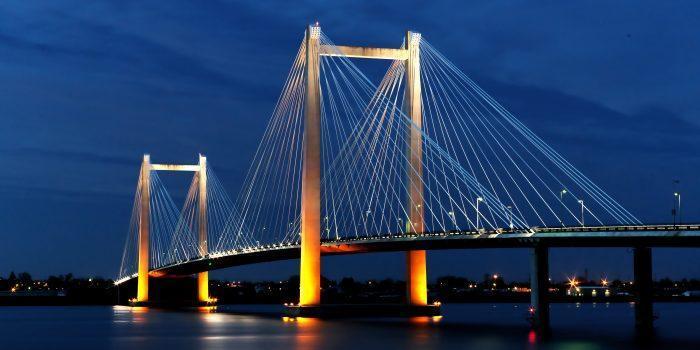 Cable bridge in the evening.

Kennewick is the largest city in the top 5 places to move to in Washington, with a 2021 Census population of 84,488. The city is part of the Tri-Cities, three closely linked cities, including Pasco and Richland. Kennewick lies near the center of Washington’s wine country, and the Tri-Cities is home to more than 300 wineries and wine bars. 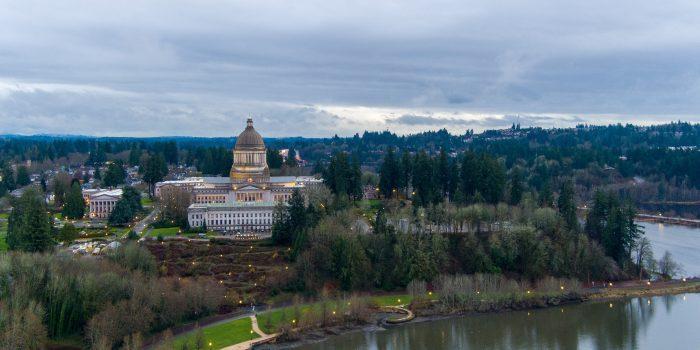 Olympia is a highly educated town in Washington, as 46 percent of its residents have a college education or higher. As the capital of Washington, Olympia is the political and cultural center of the southern Puget Sound region. There’s no shortage of fine arts venues and events in the city, everything from theatre companies to an annual film festival. 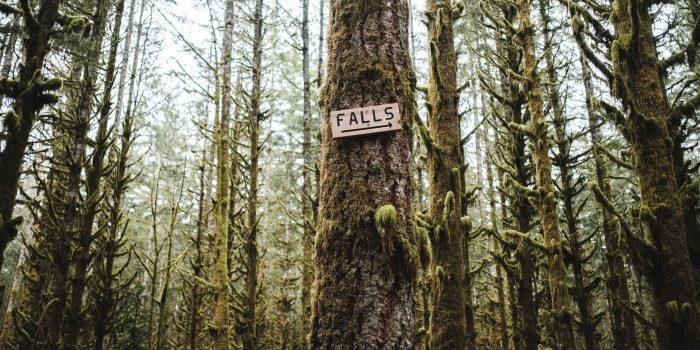 Woodinville is situated in Kings County and part of the Seattle metropolitan area. It’s also one of the most expensive housing markets in all of Washington state, with the average home value over a staggering $1.4 million. Housing costs are likely the main reason for move-outs of Woodinville, as even median rent prices are near $2,000. 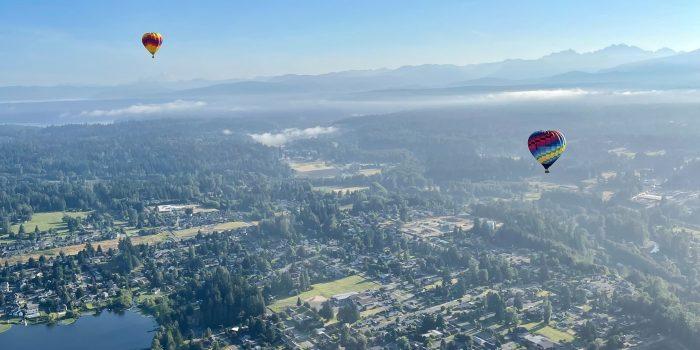 Snohomish is a small city in the Seattle metro area that’s seen better days. Along with an average home value of $945,511, residents are increasingly concerned about public safety. Along with rising crime rates, Snohomish County Sheriff Adam Fortney recently acknowledged that police shortages are a “real problem.” 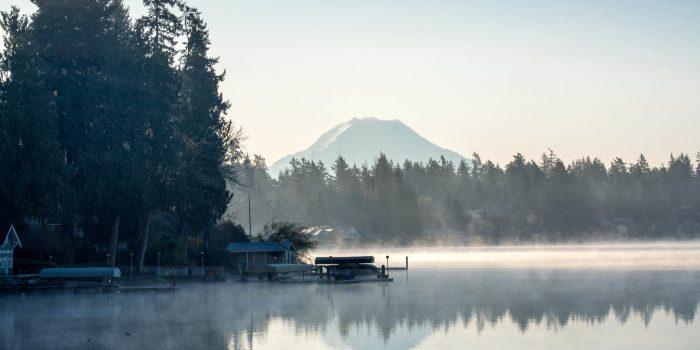 Located in the Seattle metropolitan area, Lakewood is another Washington city with serious public safety concerns. With a 48 per 1,000 residents crime rate, Lakewood has one of the highest crime rates in America compared to all cities of all sizes. A person’s chances of becoming a victim of a violent or property crime in Lakewood is one in 21. 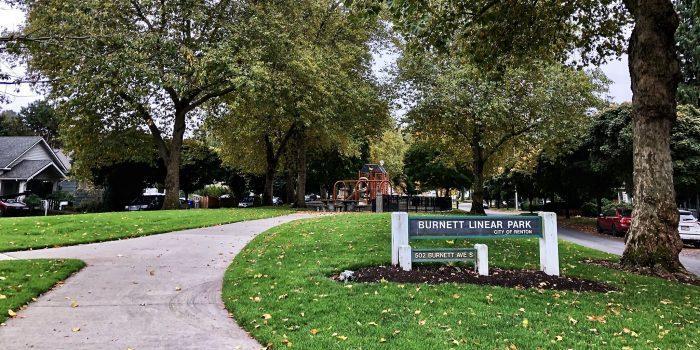 Renton is situated just 11 miles southeast of downtown Seattle, and it’s the 9th largest municipality in Washington. Though Boeing is a major employer in Renton, according to some residents, the majority BIPOC city has become a haven for hate crimes. As recently as 2019, a Renton church was attacked with explosives during Pride month. 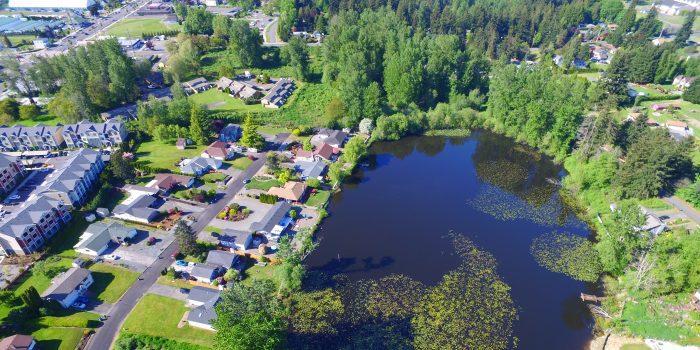 Federal Way is another city in King County that’s seeing many move-outs. Like many municipalities in King County, crime rates have concerned Federal Way residents and business owners. Commercial burglaries in Federal Way spiked 17 percent in 2021, the highest recorded total in seven years, according to the city’s police department.

III. Stories from locals - Why move into or out of Washington?

To learn a bit more about moving into and out of Washington state, we reached out to people who've either lived in the state or currently live there.

Change of pace, nature, and atmosphere: I moved to Washington from the Chicagoland area just over a year ago for a complete change of pace. It’s a different world out here in Yakima. The cost of living for my family of three is a fraction of that in the Chicago area. And for nature lovers like us, day trips to Mt. Rainier National Park and the ocean are an absolute joy. Putting the hustle and bustle of Chicago aside for a more relaxed, family-first atmosphere has done wonders for my stress levels. And while it gets cold enough out here, it’s also quite nice to put the biting freeze of Midwest winters behind us! — George Arkin moved from Chicago to Yakima, WA.

Gorgeous state, but weather and politics may play a role in outflow: Washington State is gorgeous in the summer/fall. There is a lot to do outdoors in these times and some sights you can’t find anywhere else in the country. There are typically only 2 reasons people move out of the state - seasonal depression (it gets extremely gray in the winter) and politics (new policies enable crime). My husband and I are looking for property in Arizona for better weather and cost of living! — Alexi McKinley Marysville, WA, looking for property in Arizona. 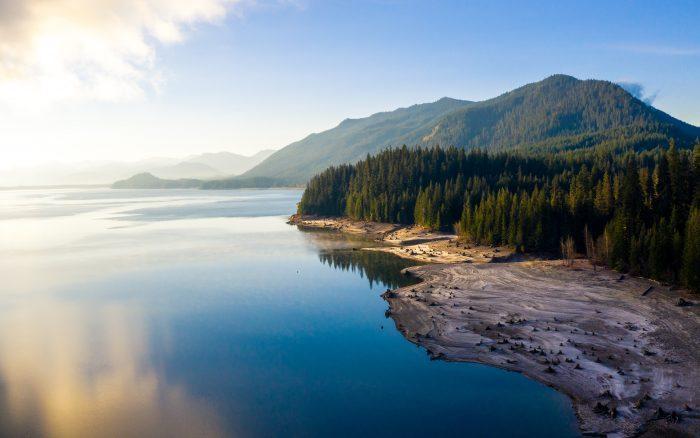 Washington’s population was more than 7.7 million in 2020 according to the U.S. Census, a 14.6% increase since 2010. The Evergreen State was the third-most populous state west of the Mississippi River in 2018, behind only California and Texas. Washington also has the largest Pacific Northwest population, followed by Oregon and Idaho.

Though Washington is an appealing destination because of its natural beauty and strong economy, moveBuddha data shows that more people are moving out than in. Since the pandemic started in 2020, Washington’s move-in-to-out ratio has steadily declined, reaching 94 moves in for every 100 moves out in mid-2022.

Smaller cities in Washington are faring much better than the denser, more frenetic towns of King County, the most populous part of the state that’s also losing the most residents. Crime, homelessness, and housing affordability are concerns in some parts of Washington, but not everywhere.

If the trends continue, more people moving to Washington will be attracted to the beatific scenery of cities like Port Angeles and Camas, not the hustle, bustle, and sky-high housing costs of major towns like Renton and Snohomish.

King County may be a major tech industry center and the birthplace of legendary grunge rock bands like Nirvana and Pearl Jam, but it may also be losing its luster compared to cities that have the likes of Olympic National Park.

This data was collected from January 1, 2022, through September 6, 2022, capturing 298,566 searches across the nation by individuals who were either planning to move themselves or hire a moving company throughout 2022.

More information about our move data and in-to-out ratio equation can be found in our Migration Report.